Health insurers and their top executives are in for a big payday if Republicans succeed in repealing the Affordable Care Act (ACA, or Obamacare). The GOP repeal would eliminate $145 billion in taxes on health insurance corporations while subsidizing giant compensation packages for their top executives. That’s money the ACA has used to help cover millions of previously-uninsured Americans. Millions will wind up uninsured again if this immoral tradeoff becomes law.

These insurance company tax breaks are just one slice of the total of roughly $600 billion in tax cuts included in the GOP plan, mostly going to rich people and big corporations.

As anyone who’s ever paid a premium knows, insurance companies aren’t wanting for money. In fact, contrary to Republican claims, health insurers have made out quite well under the ACA. The profits of the eight biggest insurance corporations increased by one-third from 2011 to 2015, rising from $19.1 billion to $25.3 billion, just as the ACA was coming into effect. Some companies tripled their profits over that span. 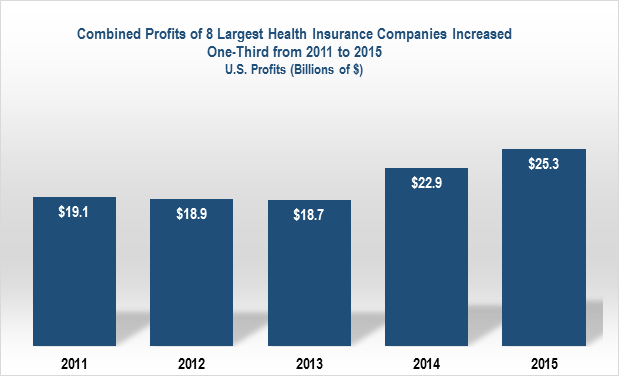 The GOP’s ACA repeal will also enrich the top executives of the insurers to the collective tune of $400 million over 10 years.

Here’s how. When CEO pay began to balloon a few decades ago, Congress capped the salaries corporations could deduct from their taxes at $1 million per employee. (Mind you, companies could keep showering their executive with as much riches as they wanted, you and I just wouldn’t be forced to help pay for it all.)

Ever creative, corporations began describing compensation over $1 million as “performance pay” unregulated by the deduction cap. This performance pay tax loophole will cost us $50 billion over the next decade.

Congress decided to use the ACA as a pilot project for ending this special corporate tax break. Since the law would be boosting the bottom lines of insurance companies, the American people deserved to know all that extra revenue was going to patient care, not executive pay.

The ACA set a more reasonable (but still quite generous) deduction cap of $500,000 for insurance company executives—but more importantly, clamped shut the performance pay loophole in the health insurance industry. In this one corner of corporate America, at least, half a million bucks would mean half a million bucks, no matter what you call it.

But that revenue will be history if Republicans get their way. Under the GOP plan, insurance companies can pay their top executives whatever they like—$10 million, $100 million, $1 billion—and the American people will help pick up the tab.

So those are the apparent priorities of Republican “health care” legislation. Up to 23 million Americans may lose coverage. Older Americans can be hit with steeply higher premiums. Medicaid will shrink by at least $834 billion. But as long as profitable insurance companies and their wealthy top executives make even more money, by GOP standards it’s a job well done.

By Will Rice, Senior Writer