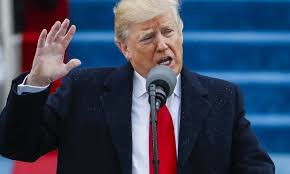 In his inaugural address, Donald Trump correctly reported a crime—the ongoing rip-off of America’s working families—but misidentified the culprits. That’s not surprising, since he’s one of them and plans to accelerate the theft now that he’s in power.

It’s true: working-class families have not shared in the nation’s prosperity over the past few decades. But Trump claimed our federal government and foreign nations had stolen the prosperity of America’s middle class. Not true. The real thieves are Donald Trump and his billionaire buddies. And through his policies as president, they plan to steal even more.

The U.S. economy (real GDP) has grown by 300% since 1986. But the income of the average American household has grown by only 10%. Where has all the money gone that hasn’t gone to America’s working families? To Donald Trump and the other members of the Top 1%.

Just between 2009-15, the income of One Percenters grew 37%, to an average of almost $1.4 million a year. Income inequality inevitably leads to wealth inequality: The Top 1% now own as much as everyone in the bottom 95% combined.

How do they do it? One big way is through the ownership of corporations, which is highly concentrated among the wealthy. The Top 1% hold over one-third of corporate stock; the top 10% have over 80% of all corporate shares. While working families are struggling to make ends meet, corporate profits are soaring—as high as they’ve been since the 1960s.

But those profits are not invested back into the workers and communities who created them. Instead, they’re used to further enrich shareholders and top executives, like Trump, through dividends and stock buybacks.

Trump and his friends are trying to sell us the same old line that what’s good for big business is good for American workers, but the facts show that just isn’t true.  He’s trying to distract us by blaming overseas boogeymen. The reality in the U.S. has been that big corporations and the rich have been lifted on a rising tide of new wealth while working families are just treading water.

Along with not paying their workers, corporations also aren’t paying their taxes. We need those taxes to fund public investments working families rely on, like schools, highways, and retirement security. In the middle of the last century, corporate taxes provided one in three federal dollars—now it’s just one in nine.

So, if Donald Trump really wanted to use his presidential powers to restore “the wealth of our middle class” that’s been “ripped from their homes,” a good first step would be to make sure the wealthy and big corporations started paying their fair share of taxes. But no.

Instead, he wants to slash the corporate tax rate by 60%, surrendering $2.6 trillion in public revenue over 10 years. He wants to cut the tax rate paid by Wall Street hedge fund managers and big corporate lawyers from 40% to just 15%, losing $1.5 trillion in a decade. And he wants to give multinational corporations stashing trillions of dollars in profits offshore a $550 billion tax cut from what they now owe.

His tax plan would, by the way, also raise taxes on almost 9 million working families, including half of all single parents.

We don’t have to look overseas to find who’s responsible for the economic stagnation of America’s working class. They’re right here among us, America’s Top 1%, and Donald Trump is their leader.