Even as freshly empowered Democrats in Washington bring new focus to defeating the pandemic, not much has changed for America’s billionaires in the midst of the crisis—except the further swelling of their bank balances. A staggering $1.1 trillion growth in the collective wealth of America’s billionaires—a nearly 40% leap—during the past 10 months of national emergency could pay for all the relief for working families contained in the $1.9 trillion coronavirus relief package proposed by President Biden, while leaving the nation’s richest households no worse off than they were before COVID-19 hit.

The combined fortune of the nation’s 660 billionaires as of Monday, January 18, 2021 was $4.1 trillion, up 38.6% from their collective net worth of just under $3 trillion on March 18, 2020, the rough start of the pandemic, based on Forbes data compiled in this report by Americans for Tax Fairness (ATF) and the Institute for Policy Studies (IPS). There have been 46 newly minted billionaires since the beginning of the pandemic, when there were 614. [See page 3 for a table of the top 15 billionaires.]

At $4.1 trillion, the total wealth of America’s 660 billionaires is two-thirds higher than the $2.4 trillion in total wealth held by the bottom half of the population, 165 million Americans.

March 18 is used as the unofficial beginning of the pandemic because by then most federal and state economic restrictions responding to the virus were in place. Moreover, March 18 was also the publication date of Forbes’ annual billionaires report in 2020. It provided a detailed baseline that ATF and IPS have been comparing periodically with real-time data from the Forbes website. This methodology has been favorably reviewed by PolitiFact. 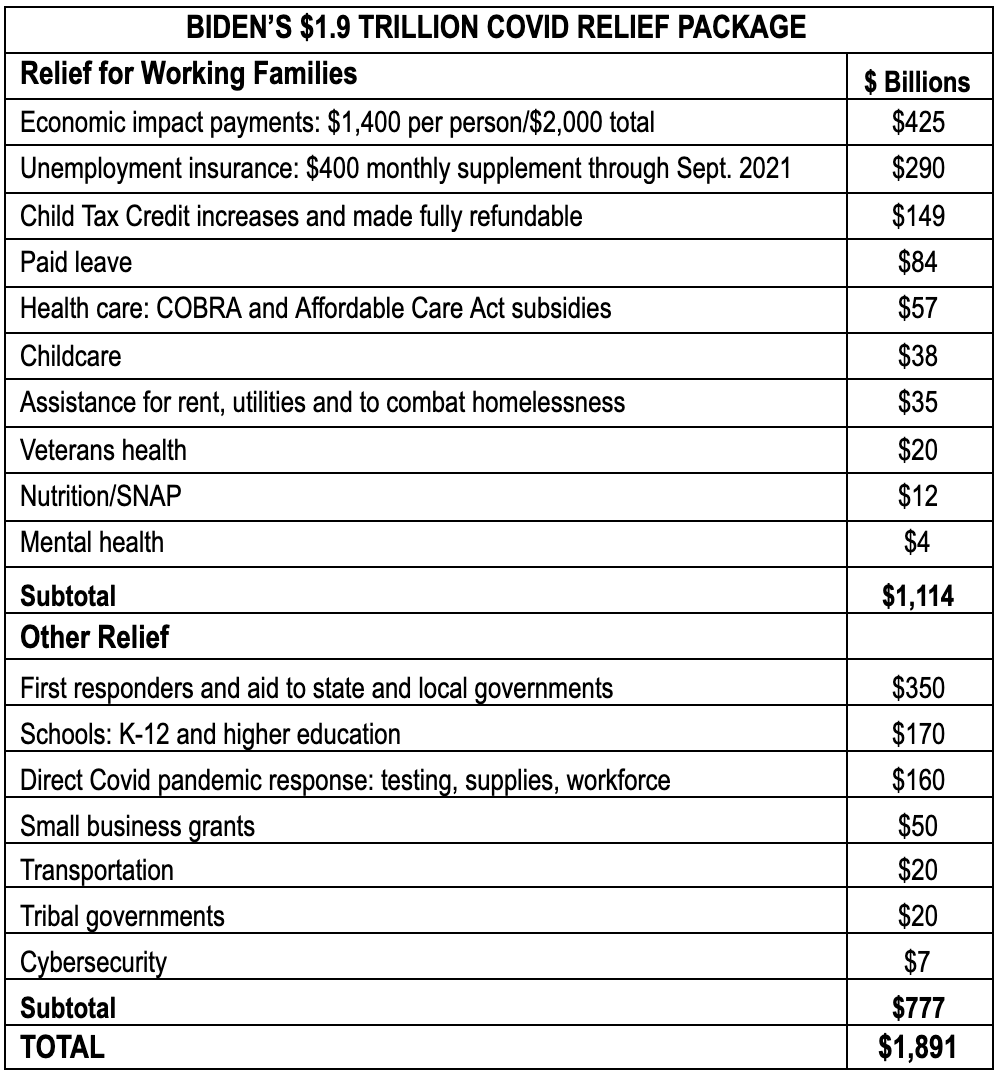 “While we can all rejoice that our nation’s response to the terrible pandemic is now in steadier and more caring hands, we can only lament that America’s billionaires are not making a meaningful contribution to that national effort, even as their wealth continues to soar,” said Frank Clemente, executive director of Americans for Tax Fairness. “The COVID crisis is crushing people of color and low-income workers while billionaires who are nearly all white have seen fortunes skyrocket. This is why we need the fair-share taxes program Joe Biden ran on, won on and is now ready to pursue.”

“Billionaires are reaping unseemly windfalls of wealth during the pandemic,” said Chuck Collins of the Institute for Policy Studies and co-author of Billionaire Bonanza 2020, a report looking at pandemic profiteering and billionaire wealth. “They benefit from having their competitors shut down or controlling technologies and services we are all dependent on in this unprecedented time. We should tax these windfall gains to pay for recovery.“ 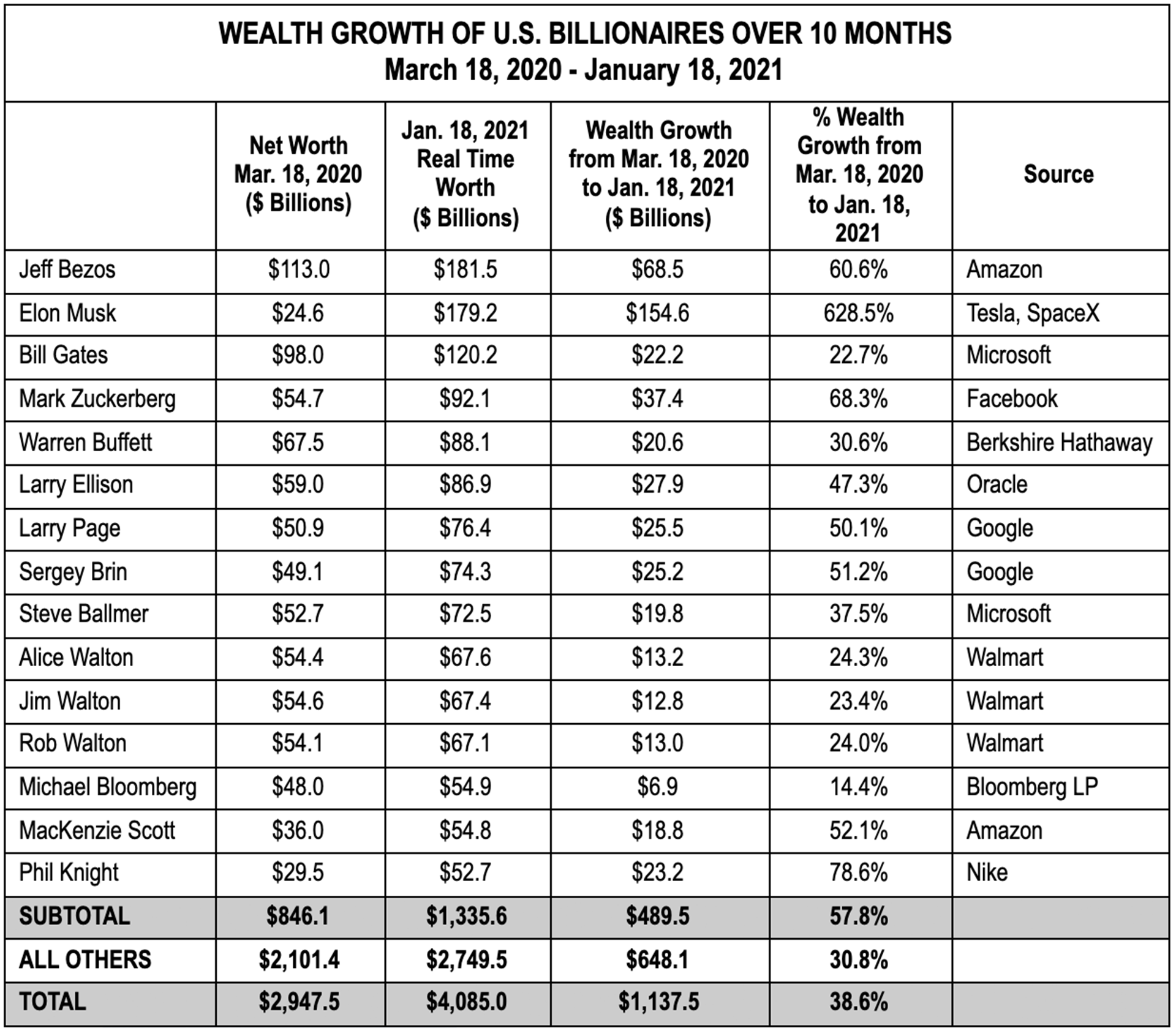 Ordinary Americans have not fared as well as billionaires during the pandemic:

Because of long-standing racial and gender disparities, low-wage workers, people of color and women have suffered disproportionately in the combined medical and economic crises of 2020. Latinos are more likely to become infected with Covid-19 and Blacks to die from the disease than are white people. Billionaires are overwhelmingly white men.

The stock market surge and lock-down economy have been a boon to tech monopolies and helped create multiple U.S. “centi-billionaires.” Jeff Bezos, Elon Musk, and Bill Gates were each worth more than $100 billion on Jan. 18. Prior to this year, Bezos had been the only U.S. centi-billionaire, reaching that peak in 2018. Bezos and other billionaires have seen particularly astonishing increases in wealth over the past 10 months:

Tax reform that ensures the wealthy pay their fair share—the principle the Biden tax plan is built on—would transform a good chunk of those huge billionaire gains into public revenue to help heal a hurting nation. But getting at that big boost in billionaire fortunes is not as simple as raising tax rates: tax rules let the rich delay, diminish and even ultimately avoid any tax on the growth in their wealth. What’s needed is structural change to how wealth is taxed.

The most direct approach is an annual wealth tax on the biggest fortunes, proposed by Senators Elizabeth Warren and Bernie Sanders, among others. Another option is the annual taxation of investment gains on stocks and other tradable assets, an idea advanced by the new Senate Finance Committee chair, Ron Wyden. Even under the current discounted tax rates for investment income, if Wyden’s plan had been in effect in 2020, America’s billionaires would be paying hundreds of billions of dollars in extra taxes this spring thanks to their gargantuan pandemic profits last year.