BASED ON THEIR WEALTH GROWTH, 26 TOP BILLIONAIRES PAID AN AVERAGE INCOME TAX RATE OF JUST 4.8% OVER 6 RECENT YEARS

Twenty-six of the richest people in America paid an average federal income tax rate of just 4.8% over six years (2013-18) when the growth in their wealth is counted as income, according to Americans for Tax Fairness (ATF) using IRS tax-payment information recently released by ProPublica and billionaire wealth growth data from Forbes. This revelation underscores the need to tax billionaires and other ultra-wealthy Americans more effectively, as proposed in plans from President Biden and Congressional Democrats.

The 26 billionaires’ collective wealth grew by $500 billion between 2013 and 2018 while their total federal income taxes were just $24 billion. The taxes paid were not based on wealth growth, which under current law is not taxed, but rather on “taxable income”: wages, private business earnings, dividends, interest, profits from the sale of stocks and other investments, and other sources. As is usual among the ultra-wealthy, that taxable income—in this case, $132.2 billion—is far smaller than their leap in fortunes. [See table below and this spreadsheet]

At the scale enjoyed by billionaires, growth in the value of assets—even if those assets are not sold—can be as good as money in the bank, which Elon Musk is putting to good effect in his purchase of Twitter. Among their other advantages, those gains can be used to secure low-interest loans that fund lavish lifestyles without owing income tax. So including the increased value of unsold assets when figuring the share of income paid in federal income taxes provides what ProPublica in a separate report last year dubbed a “true tax rate.” That report identified six billionaires paying no taxes some years or very low tax rates—this ATF analysis expands the list to 26.

As highlighted by ProPublica in its report this year, the ultrawealthy pay a remarkably low tax rate even on their sources of income that are now taxed. The 26 billionaires paid an average effective tax rate of just 18.2% on their reported income—far below the top statutory tax rate of 39.6% in effect for all but one of the six years and closer to the average 13.3% rate paid by Americans of all income levels in 2019.

“As long as we fail to tax their main source of income—the growth in their fortunes—many billionaires will continue to live largely tax-free lives,” said Frank Clemente, executive director of Americans for Tax Fairness. “Teachers, plumbers, firefighters and other working Americans can already pay higher tax rates than billionaires—and that’s just counting the small part of billionaire income that is now taxed. When you include their untaxed wealth growth in the calculation, many billionaires pay almost nothing.” 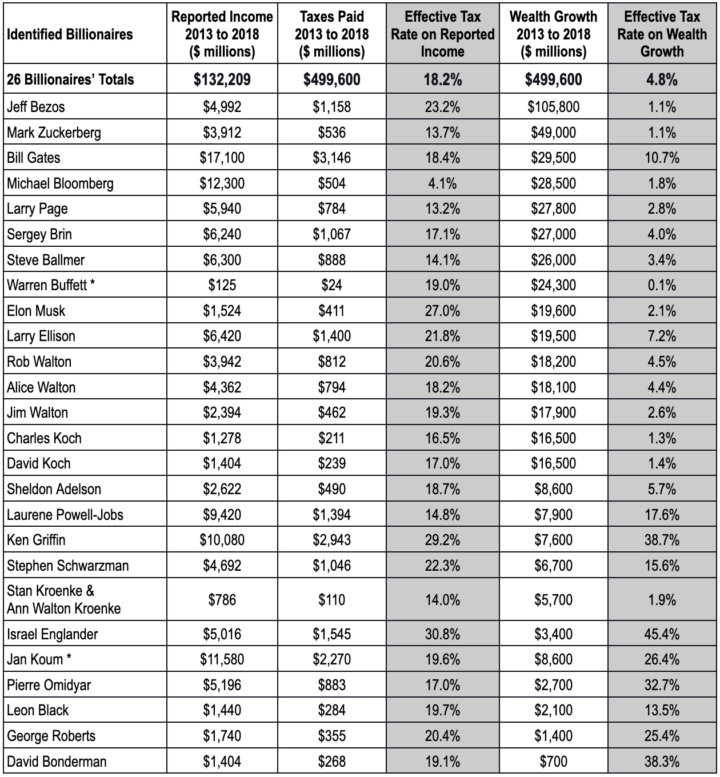 * 2013 data is not available for Warren Buffett or Jan Koum, who became a billionaire in 2014. For Koum we calculate his 2013 starting wealth at $1 billion, although it was less since he did not make the Forbes billionaires list that year.
Sources: ATF’s analysis of data from ProPublica America’s Highest Earners and Their Taxes Revealed, April 13, 2022, and Forbes annual billionaires reports.

In their recent report, ProPublica confined itself to calculating only the traditional tax rate of the 400 highest income taxpayers between 2013-18 and found it to be 22.6%. Most of the taxpayers in the study were granted anonymity, but ProPublica named 42, including the top 15. By cross-referencing those names with Forbes billionaire wealth-growth data from 2013 through 2018, ATF was able to calculate the “true tax rate” of 4.8% for the 26 billionaires over that six-year period.

This finding is only the latest addition to a growing body of evidence that billionaires and other ultra-wealthy people do not pay their fair share of taxes, largely because the system does not tax their prime source of income: the growing value of unsold assets. President Biden, Senate Finance Committee chairman Ron Wyden (D-OR) and a group of House Democrats led by Rep. Jamaal Bowman (D-NY) all want to close this loophole through separate proposals unveiled over the past six months. Details differ among the plans, but they all would require the ultra-rich to start paying taxes on the gains in their wealth each year, just like workers pay taxes on their paychecks each year now.