President-elect Joe Biden prevailed in the November election with tax fairness a core part of his campaign message despite vigorous attacks on his position from President Donald Trump and allied groups. Three indicators of Biden’s tax-fairness mandate:

Biden prevailed with a major progressive tax reform plan that got considerable media attention and was heavily attacked by his opponents.

Biden ran on the most progressive tax and public investment plan of any presidential candidate in modern American history. Under Biden’s plan, corporations and the wealthy will contribute $3.3 trillion in new tax revenue over nine years ($2.6 trillion not counting increased Social Security taxes on the wealthy). Tax credits Biden would give back to working families, domestic manufacturers and green energy producers reduces the net revenue gain to $2.1 trillion, according to Tax Policy Center estimates analyzed by Americans for Tax Fairness.

The New York Times, Wall Street Journal, Washington Post, and CBS News were among the media outlets that provided in-depth analyses of Biden’s tax proposals. An example of the intensity of GOP attacks on the Biden tax plan is the $40 million in ads the main outside group supporting Trump announced it planned to air in five battleground states over the last month of the campaign warning that Biden would raise peoples’ taxes.

Those and other Republican ads (examples here, here and here ) routinely lied about Biden’s plans by falsely claiming that his plan would directly raise taxes on middle-income families, lead to higher prices and threaten savings and jobs—all of which should have made the attacks that much more effective.

Biden’s top-performing ad rebutted Republican charges against the Biden tax plan and went on offense explaining how Biden wants to make the wealthy and corporations pay their fair share to protect Social Security and Medicare and to make major investments in America. Biden’s victory suggests GOP scare tactics on taxes do not work as they have in the past.

Biden’s stump speech in the closing weeks of the campaign was built around an aggressive call for fair-share taxes. (Also see this video highlight reel.)

In a typical example less than 25 minutes long, he devoted over four minutes to his tax plan and general economic philosophy, critically contrasting them with Trump’s. He slammed the Trump-GOP tax cuts, the unprecedented growth of billionaire wealth during the pandemic (citing ATF-IPS statistics), the failure of Trump and big corporations to pay taxes, and described how Biden’s tax plan will make the rich and corporations pay their fair share, thereby creating jobs and raising revenue to invest in services that benefit working families.

Among the specific targets of Biden’s focus was Trump’s “$1.5 trillion in tax giveaways to the wealthiest families in the nation and to the corporations”; the over 90 Fortune 500 companies that “don’t pay a single penny in tax”; and Trump’s boasting about his ability to “game the system.”

As the table below from the Wesleyan Media Project shows, from mid-July to October 25 taxes were often at the top or near to it among the issues most frequently mentioned in broadcast ads for Donald Trump. Between Labor Day and October 25 , taxes were among the top 5 most frequently mentioned issues in broadcast ads for Joe Biden, many defending his tax plan.

As noted above, tax-themed ads from the Trump camp were mostly attacks on the Biden tax plan. These attacks accelerated as Election Day neared: tax-related ads made up almost half (46%) of all Trump broadcast TV ads in the second-to-last week of the campaign showing Republicans believed their attacks on Biden’s tax plan would be an effective closing argument.

After Labor Day, taxes were often among the top 5 issues in broadcast ads for Biden. Those ads typically covered a range of topics like this one. When he addressed tax issues head-on it was to criticize Trump’s decades of tax dodging, which can be viewed as a proxy for the issue of tax fairness. This ad, for instance, compares the $750 Trump paid in federal income taxes in 2017 with the thousands of dollars—up to 20 times more—paid by typical American workers.

ECONOMY WAS WINNING ISSUE FOR TRUMP IN EXIT POLLS, BUT NO SURVEY ON TAXES

The two premier national “exit” surveys of voters (which included both voters exiting the polls on Election Day and those who voted early) did not ask about the importance of tax policy among their top “issue” choices. Neither the Edison Research survey nor one conducted by the Associated Press offered “taxes” as a possible response to a question about the most important issues facing the country. The closest proxy for a “taxes” response—“the economy” in the Edison poll, “the economy and jobs” in the AP—ranked 1 or 2 in the surveys as the most popular answer, cited by 28% to 35% of all voters in each poll. Those voters who chose the economy as their top issue overwhelmingly voted for Trump: by 81% to 16% in the AP survey and by 83% to 17% in the Edison poll. 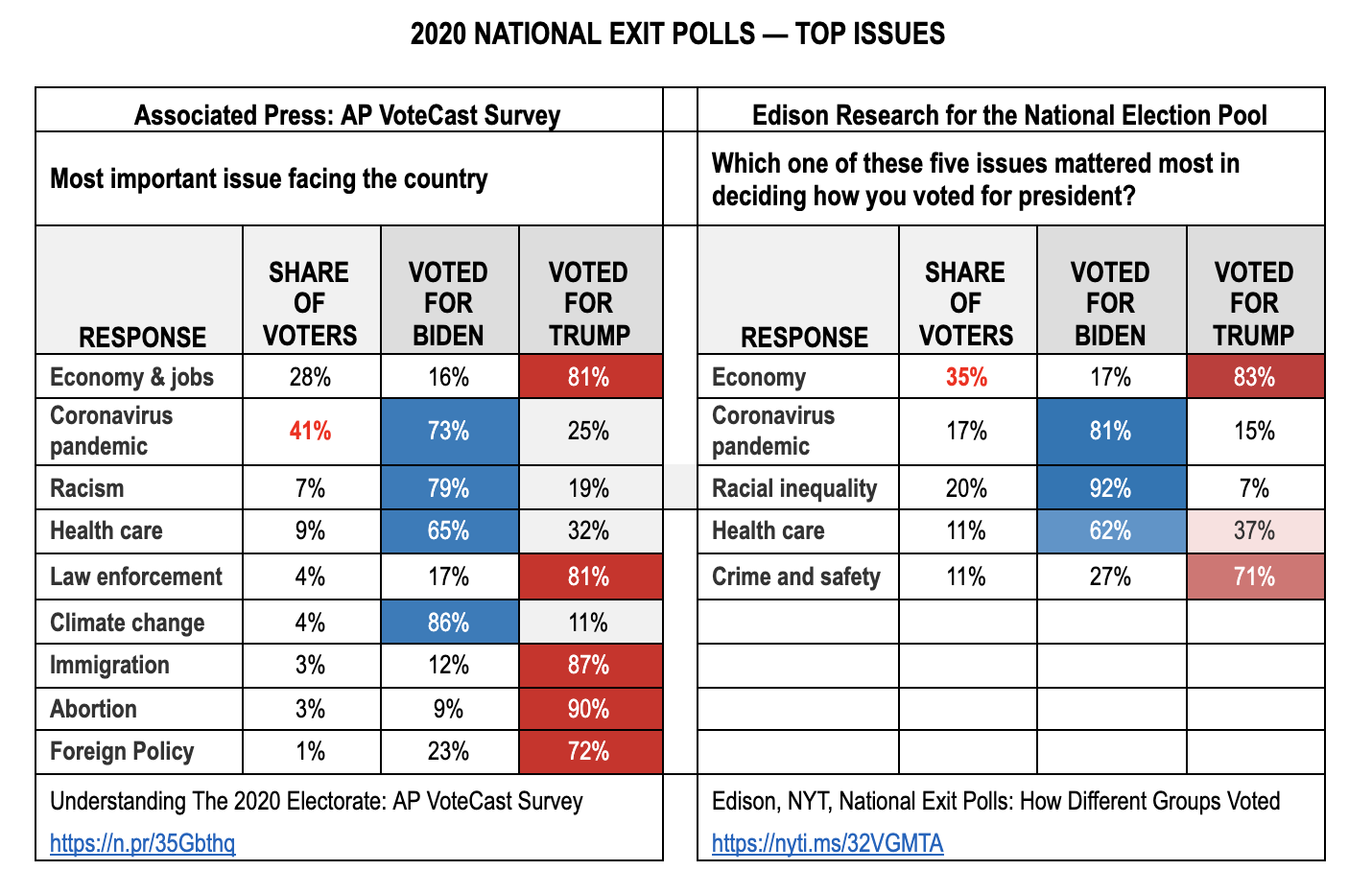