Half the baseball owners threatening America’s pastime by locking out their players in a greedy money grab belong to another club: that of billionaires, who as a group are hitting up the American people by paying too little tax and sometimes none at all. Americans for Tax Fairness (ATF) today called on team owners of Major League Baseball (MLB) to start playing ball with their players in the negotiation of a fair contract—and for billionaire (and multimillionaire) owners who aren’t now to start paying their fair share of taxes.

The 15 billionaire owners—half the MLB total of 30—and their families are worth a collective $70.7 billion, their wealth having jumped by one-quarter, or $14 billion, over the two years of the pandemic, based on ATF’s analysis of Forbes data. (See table and go here for more information.) 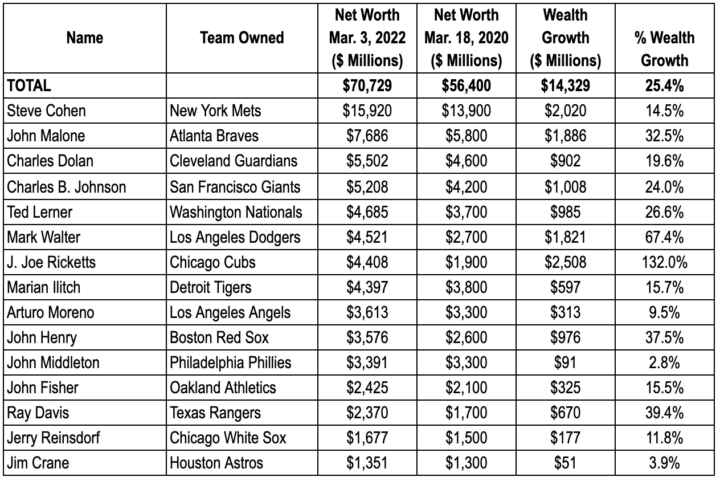 Of course, Covid had the opposite effect on thousands of other Americans—ranging from stadium t-shirt vendors to neighborhood bar owners—who rely on events like baseball for their livelihoods but were shut down in the health crisis. And even as billionaire team owners have raked in those 25% wealth gains, ATF noted, they are joining with their fellow owners in the current fight to keep player salary increases below 1.5%.

There’s good reason to suspect billionaire baseball owners are also whiffing when it comes to paying their fair share of taxes. Several of the nation’s richest billionaires—including Elon Musk and Jeff Bezos—have in several recent years paid zero federal income taxes. America’s 400 top billionaires have over nine years paid a tax rate of just 8.2% when the rising value of their stock portfolios is counted as income. Two MLB owners—the Mets’ Steve Cohen and the Braves’ John Malone—are rich enough today to be in that top 400.

“Billionaire baseball owners are striking out when it comes to paying their players fairly and—judging by their billionaire peers—likely when it comes to paying their fair share of taxes, too,” said Frank Clemente, executive director of Americans for Tax Fairness. “MLB should end the lockout, let the players play and the fans enjoy, while negotiating a new labor contract in good faith. Similarly, Congress should end the special tax breaks enjoyed by billionaires by negotiating a tax reform package this year that includes the Billionaires Income Tax.”

The Billionaires Income Tax would largely end the scandal of tax-free billionaires by taxing the gains in the value of their assets as they’re made each year, just as MLB players—and average taxpayers—pay taxes on their wages each year. Now those asset gains are untaxed unless the underlying asset is sold. But billionaires and other ultra-wealthy types don’t need to sell: they can live lavishly on money borrowed at cheap rates secured by their rising fortunes. And when those gains are passed on to the next generation, they completely disappear for tax purposes.

Under Wyden’s plan, the tax on tradeable assets like corporate stock whose change in value is easily ascertained would be collected each year. The tax on harder-to-price assets like yachts, oil paintings—and baseball teams—would still only be collected at sale but with interest charged on the missed annual payments to cover all those years that taxes were not paid as the value of the asset increased tax-free.

Billionaire baseball owners have been hitting home runs with their team investments: over the past 20 years, the total value of MLB teams has multiplied over six-fold, beating stock market returns. Forbes estimates five teams are worth over $3 billion each—and four of them (the Dodgers, Red Sox, Cubs, and Giants) are owned by billionaires.

When billionaires don’t pay their fair share of taxes, ordinary Americans pick up the tab through higher taxes on them, diminished public services, bigger deficits or some combination of the three. Of course, billionaire ballclub owners are used to the public footing their bills through the lavish local tax breaks and other subsidies that help build most modern ballparks.