Combined Wealth of Amazon, Facebook Chiefs Jumped $100B During Pandemic; Together They’re Worth Over $265B on Eve of Antitrust Testimony

Internet billionaires Jeff Bezos and Mark Zuckerberg, set to confront in Congressional testimony tomorrow charges that their companies break antitrust laws to dominate markets, have seen their wealth reach dizzying heights in the midst of the pandemic. The chiefs of Amazon and Facebook have both enjoyed around a 60% jump in their net worth since the coronavirus lockdowns began in mid-March. Bezos is now worth about $181 billion and Zuckerberg around $86 billion, according to Forbes data analyzed by Americans for Tax Fairness. On March 18 they were worth $113 billion and $55 billion, respectively. See figure below.

Retail giant Amazon is accused of exploiting the proprietary data of third-party sellers on its platform to undercut those smaller retailers with copy-cat products. Last year social media titan Facebook was fined a record $5 billion by the Federal Trade Commission for abusing the privacy of its users and now is under anti-trust investigation by almost every attorney general in the nation.

The U.S. Department of Justice is probing both companies—along with Apple and Google—for possible anti-competitive behavior.

Separately, Amazon has a history of dodging federal income taxes, paying less than zero in 2017 and 2018 despite almost $17 billion in combined profits.

Bezos and Zuckerberg are among the wealthiest of about 640 American billionaires who collectively enjoyed a $713 billion leap in their fortunes in the four months following the COVID-19 economic shutdown that began around March 18. (That was also the date Forbes magazine published its annual report on billionaires, from which this data is taken.)

Over that same four-month stretch, almost 140,000 Americans died from coronavirus and 50 million lost their jobs. One in 10 Americans surveyed in early July reported not having enough to eat, and 20% of renters said they were behind in their rent.

“Congress is right to investigate possible antitrust violations by Amazon and Facebook, which may be contributing to the incredible growth in the wealth of those companies’ founders during our national emergency. But there are also larger issues of inequity raised by the skyrocketing wealth,” said Frank Clemente, executive director of Americans for Tax Fairness. “That two billionaires could experience such a spectacular rise in their fortunes while the rest of the country was sinking under the twin weight of disease and recession tells us there’s something wrong with the system.

“In addition to better enforcing our antitrust laws, we need to reform our rigged tax system to ensure Bezos, Zuckerberg and other wealthy Americans—as well as Amazon, Facebook and other profitable corporations—pay their fair share of taxes,” Clemente said. “While it remains to be seen whether Bezos is getting richer by cheating small retailers on Amazon, it’s certain he benefits from Amazon’s habit of avoiding paying federal income taxes.” 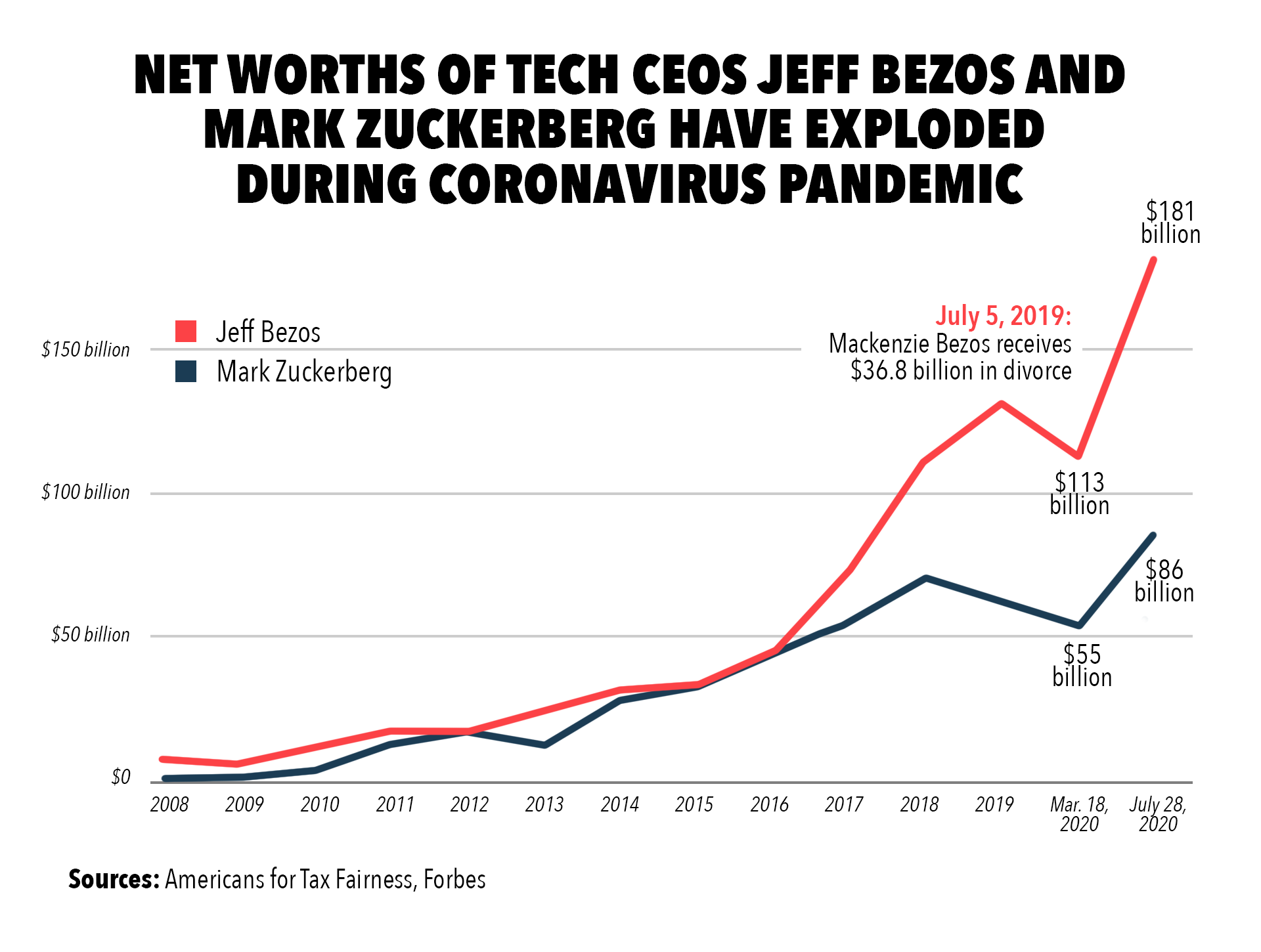 A table with supporting data and sources is available here.