BUILD BACK BETTER ACT WILL RAISE TAX RATES ON MILLIONAIRES

Contrary to Republican claims that millionaires will get a big tax break from the House-passed Build Back Better Act (BBBA) now before the Senate, the tax rates (and therefore the taxes) paid by millionaires will go up significantly over the next 10 years to pay for the social and environmental investments in the BBBA, while the incomes of working families will be bolstered by bigger tax credits for parents and workers. Those two key facts about the BBBA are illustrated by two charts released today by Americans for Tax Fairness (ATF) based on data from the Joint Committee on Taxation (JCT), the official revenue scorekeeper of Congress, and from the Tax Policy Center.

A rare error by JCT—since corrected—had fueled a disingenuous campaign by opponents of the Build Back Better Act claiming the bill would lower tax rates paid by the rich instead of requiring them to pay a fairer share of taxes. The real impact of the BBBA’s tax reforms on the incomes of the wealthy and average Americans is illustrated by the charts below. The average tax rate paid by people making more than $1 million will increase by 3.2 percentage points in 2022 and by more than 6 percentage points in later years. 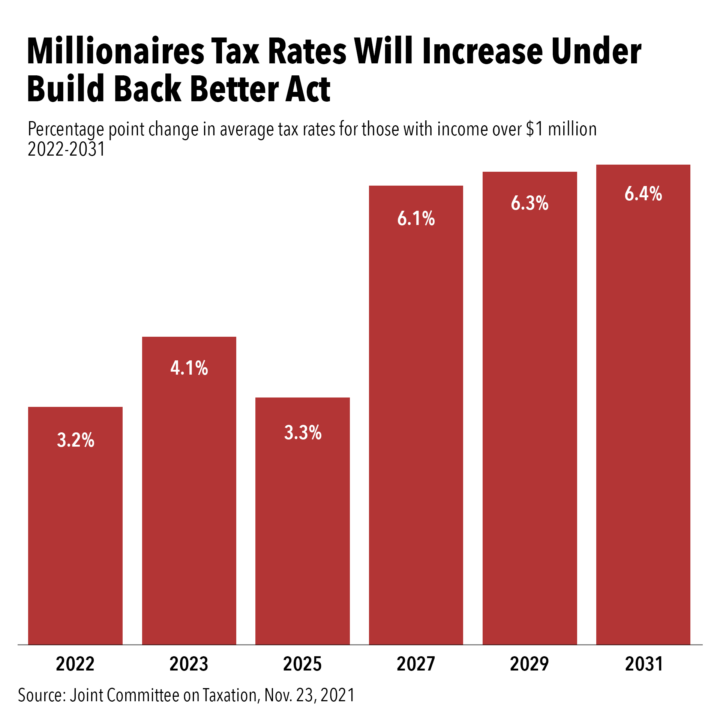 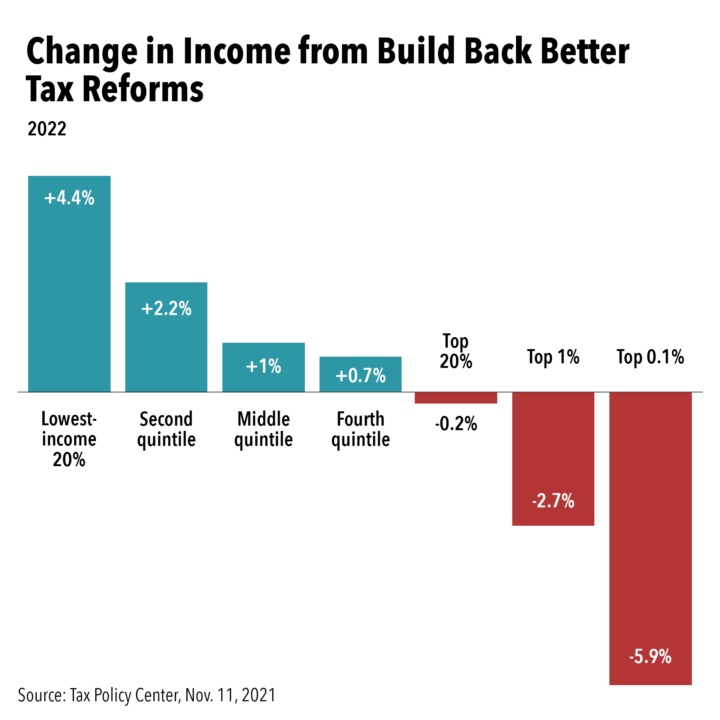 The BBBA, which passed the House of Representatives last month, would make big expenses like healthcare, childcare, housing and education much more affordable for millions of working families; and confront climate change with the biggest clean-energy investments in history. All of the bill’s spending would be paid for, mostly by fairer taxes on the rich and corporations. No one making under $400,000 a year would pay higher tax rates under the plan. In fact, for 80% of households, taxes will go down and incomes up due to expansions of the Child Tax Credit, Earned Income Tax Credit, healthcare and other tax credits (see chart above).

“The Build Back Better Act is the first major step in our long-sought goal of making the rich and corporations pay closer to their fair share of taxes,” said ATF executive director Frank Clemente. “Republicans in Congress intent on preserving tax loopholes for their rich donors seized on an error to completely misrepresent the reality of the BBBA. The fact is the wealthy will pay significantly higher tax rates to help make healthcare, medicines, childcare, education and housing more affordable for families. In addition, most Americans will see their incomes rise.”

Another inaccurate charge leveled against BBBA is that it will fuel the inflation now affecting American families. The reality is again the opposite: not only will the plan directly reduce some of the biggest expenses families face, but because it is fully paid for, it will tend to hold down prices in the long term, not force them up.