CBS News: A Trump tax return revealed — here’s what accountants think of it

Frank Clemente, executive director of Americans for Tax Fairness, which favors taxing the wealthy more, pointed out that Mr. Trump derives his income from more than 500 business entities, each with its own income stream and tax filing. “It’s in those filings that you would see names and sources of income,” he said. “The tax return that we’re looking at, we’re not going to see that — those are all summaries and rollups of what’s in the filing of individual entities.”

A leaked copy of Donald Trump’s 2005 tax return shows that he and his wife Melania would have paid very little in federal income taxes that year. But his final income tax rate ended up being 24 percent due to a supplemental tax for the wealthy designed to ensure their use of loopholes doesn’t totally eliminate what they owe, according to a review of the document by accountants for CBS MoneyWatch.

Mr. Trump’s basic tax return from 2005 — a two-page Form 1040 that summarizes his return — was made public by MSNBC’s Rachel Maddow Tuesday night. It showed that the Trumps paid an effective income tax rate of 24 percent, far below the top 35 percent rate at the time that a billionaire would presumably have been paying. But if they didn’t have to pay the supplemental tax, they would have forked over a mere 4 percent.

Known as the alternative minimum tax, or AMT, this levy is in President Trump’s gunsights to eliminate in the pending overhaul of the nation’s tax code. Because the AMT has never been indexed for inflation in the decades since its passage, it’s now frequently applied to upper-middle-income people, not the just the mega-bucks crowd to which the Trumps belong.

Significantly helping matters back in 2005 was the fact he reported a $103.2 million loss that year, which could be part of an almost $1 billion writedown he’d taken on gargantuan losses claimed a decade earlier.

Last October, the New York Times reported that Mr. Trump declared a $916 million loss in 1995. It was, the Times noted, “a tax deduction so substantial it could have allowed him to legally avoid paying any federal income taxes for up to 18 years.”

Martin Sullivan, chief economist and contributing editor at Tax Analysts, said it is hard to read too much into Mr. Trump’s tax payments based on only two pages of his 2005 return. But he added, “What is striking — though not illegal or improper — is the $100 million-plus in business loses.”

Mr. Trump has refused to release his tax forms, even though all presidents stretching back to Richard Nixon have released theirs. The reason, he has said, is that he is under audit for multiple years worth of returns. Others have disputed that interpretation, saying he could unveil them if he wanted to since there is no law prohibiting him from doing so while under audit. And his refusal, of course, has sparked all manner of dark speculation of what may be in the returns.

The White House, in a statement before the Maddow show aired,  confirmed that in 2005 Mr. Trump wrote off “large scale depreciation for construction,” which pared his tax bill. The statement said he did nothing wrong and knocked MSNBC for obtaining his tax documents and making them public.

While Maddow’s show hit the high spots of the leaked tax form, accountants and other tax experts reviewing the document for CBS MoneyWatch had a heyday, even while noting they needed much more information from elsewhere in the 2005 tax filing to really understand his tax liability completely.

Ira Rubenstein, principal in charge of New York accounting firm MBAF, said it would help if the supporting forms, known as schedules, had been obtained in addition to the Form 1040. “Otherwise we really can’t be sure,” he said.

Frank Clemente, executive director of Americans for Tax Fairness, which favors taxing the wealthy more, pointed out that Mr. Trump derives his income from more than 500 business entities, each with its own income stream and tax filing. “It’s in those filings that you would see names and sources of income,” he said. “The tax return that we’re looking at, we’re not going to see that — those are all summaries and rollups of what’s in the filing of individual entities.”

He pointed out that real estate, which is Mr. Trump’s business, allows for  the biggest write-offs, thus dramatically reducing property magnates’ final tax bills. “And we don’t know what share of his income is derived from real estate versus the branding that he’s doing,” Clemente said, referring to the numerous side businesses that Mr. Trump and his adult children are involved in.

Another tantalizing tidbit for the accounting crowd: Line 12 of the document, which lists more than $40 million in business income, also known as self-employment income. “Where is that money coming from?” Lieberman asked.

Irina Ivanova and Graham Kates contributed to this report. 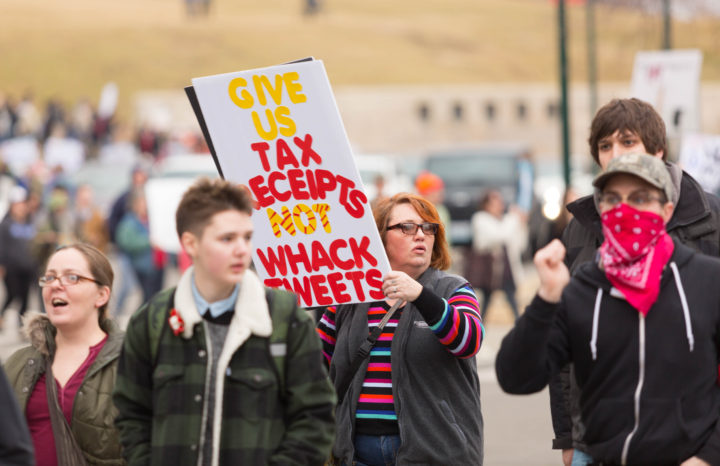