WASHINGTON, D.C. – As you prepare editorials and messages to honor American workers this Labor Day, we urge you to consider the enclosed research and data showing how the Trump-GOP tax cuts are affecting workers and how they are faring in the current economy.

President Trump promised that employers would use their  large tax cuts to give working families a $4,000 pay raise. But it hasn’t happened. Meanwhile, wealthy CEOs and corporate shareholders are enjoying a different Labor Day this year because of Trump’s tax law, which will cost $1.9 trillion according to the Congressional Budget Office and blow a big hole in the deficit. And when the law is fully implemented, 83% of the tax cuts will go to the richest 1%, per the Tax Policy Center.

After the first eight months of the Trump-GOP tax cuts, according to an ongoing Americans for Tax Fairness analysis: 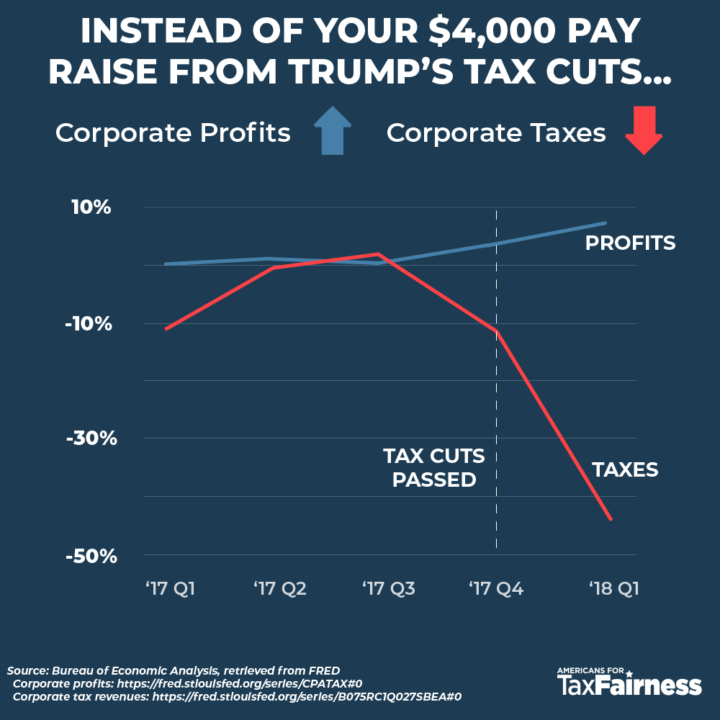 Source: Corporate profits and corporate taxes from Bureau of Economic Analysis, retrieved from FRED, as of August 20, 2018

To help reduce the deficit caused by their tax cuts, President Trump and the House GOP have called for cutting health care—Medicare, Medicaid and the Affordable Care Act—by $1.3 trillion to $2 trillion, or roughly the cost of the tax cuts.

A better way to celebrate American workers this Labor Day, would be to repeal Trump’s tax cuts for the wealthy and corporations and use the money to invest in America—to repair roads and bridges, expand broadband to rural America, make healthcare more affordable, improve public education, and ensure seniors a more secure retirement.

In other words, let’s help working families get ahead instead of rich CEOs, Wall Street banks, drug companies, health insurers, and Big Oil, who are getting the lion’s share of the benefits from the Trump-GOP tax cuts.

WHAT OTHERS ARE SAYING: