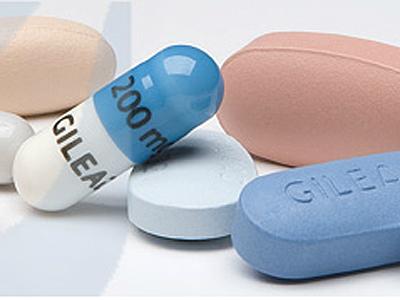 WASHINGTON, D.C.— Pharmaceutical giant Gilead Sciences’ offshore profits jumped by nearly 32% in 2016, from $28.5 billion in 2015 to almost $38 billion, according to the company’s latest filings with the Securities and Exchange Commission (SEC).

Gilead reports that in 2016 it owed $13.1 billion in U.S. corporate income taxes on those offshore profits (which are known as “permanently reinvested earnings”). That translates into a tax rate of 34.8%. Since American corporations receive a dollar-for-dollar credit for tax they have paid to foreign governments against the 35% tax they owe the U.S., this means Gilead paid a miniscule 0.2% in foreign taxes on those offshore profits. Therefore, it’s clear that virtually all the company’s offshore earnings are in tax havens.

President Trump’s tax proposal during the campaign included a mandatory tax on corporations’ accumulated foreign earnings (what’s known as a “deemed repatriation”). But he would sharply cut the tax rate on offshore profits from 35% to only 10%. For Gilead, this would reduce its U.S. tax bill from $13.1 billion to around $3.7 billion—a nearly $10 billion tax cut.

“Gilead should pay the taxes it owes, not get a huge tax giveaway from President Trump,” said Frank Clemente, executive director of Americans for Tax Fairness. “That $10 billion could more than fully fund for a year the two largest programs of the National Institutes of Health (p. 23): the institutes battling cancer and infectious diseases.” 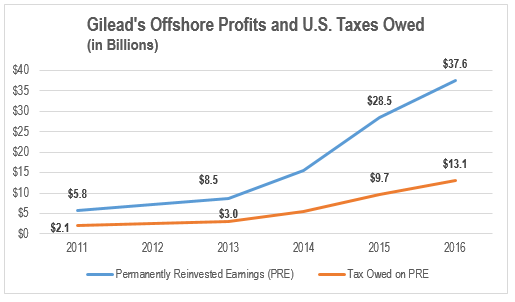 Source: Institute on Taxation and Economic Policy and ATF analysis of Gilead Sciences’ 10K filings with the SEC

A loophole in federal law allows Gilead and other multinational corporations to defer paying U.S. taxes on profits they declare to be “permanently reinvested” in foreign countries until they are remitted to the U.S. parent company. Corporations often stockpile these profits year after year and avoid paying their U.S. taxes indefinitely. Altogether, U.S. Fortune 500 corporations hold $2.6 trillion in offshore profits, on which they owe up to $767 billion in U.S. taxes, according to the Institute on Taxation and Economic Policy.

Last year, Americans for Tax Fairness reported how Gilead Sciences had boosted its profits by overcharging consumers and government health programs for hepatitis C drugs developed with taxpayer dollars and then shifted the profits into Ireland to avoid U.S. taxes. Gilead’s top selling hepatitis C medications, Harvoni and Sovaldi, represented 47% of the company’s total revenues in 2016, according to its SEC filings.

That’s not surprising, since several years after both drugs were released, their prices remain astronomical. Harvoni’s retail price on GoodRx today is about $32,000 for a 28-pill, four-week supply, or $96,000 for the standard 12-week treatment. Sovaldi costs $86,000 for the 12-week treatment. In each case, the price works out to more than a thousand dollars a pill.

The list prices for the same drugs bought through public health systems have been no cheaper in recent years. In 2015 (the latest year’s data available), both Medicaid and Medicare reported the gross prices paid by the programs for both Sovaldi and Harvoni was also about a thousand dollars a pill. Medicare reported spending, before rebates, about $90,000 a year per patient for each drug.

Medicare’s estimated net price (the price negotiated between Gilead and Medicare Part D, including rebates) was lower: for a standard 12-week treatment in 2015, $50,400 for Harvoni and $44,520 for Sovaldi. But even these discounted prices represent exorbitant costs for consumers and public health insurance programs, especially given that actual manufacturing costs for a 12-week course of Sovaldi has been estimated by its developer to be no more than $1,400, and pegged as low as $68 by outside researchers. Both Medicare and Medicaid paid more for Harvoni than any other drug in 2015—more than $7 billion for Medicare and nearly $2.2 billion for Medicaid.

After the release of these high-cost drugs in 2013 and 2014, Gilead’s worldwide profits more than quadrupled, from $4.2 billion in 2013 to over $17 billion in 2016. Over the same time, the company’s offshore “permanently reinvested” earnings jumped from $8.5 billion to $37.6 billion. These large increases occurred after the company transferred the patent rights for at least one of the drugs, Sovaldi, to Ireland. (Harvoni is a successor drug to Sovaldi and relies on its key ingredient, sofosbuvir, so it is probable that Harvoni’s patent rights are also in Ireland.) This strategy allows Gilead to shift profits earned in the U.S. to its Irish subsidiaries. Gilead’s SEC filings identify 13 subsidiaries in tax-haven jurisdictions, including seven in Ireland.

Yet, Gilead appears to be dodging taxes in Ireland, as well. The billions in worldwide profits that Gilead is booking in its Irish subsidiaries are defined as “tax-resident” in the Bahamas, according to an investigative report in Ireland. The Bahamas is a tax haven with no corporate income tax. Gilead is achieving this through a so-called “Double Irish” tax loophole. That means the company is not paying taxes to any country on its primarily U.S. profits. 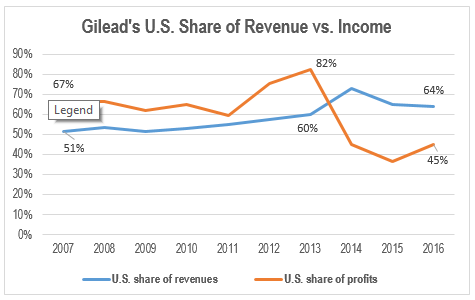 Source: Institute on Taxation and Economic Policy and ATF analysis of Gilead Sciences’ 10K filings with the SEC

“Gilead Sciences continues to rip-off the American public with its lethal combination of price gouging and tax dodging,” added Clemente. “Aggressive tax dodgers like Gilead should not be rewarded with the huge new tax break on offshore profits that President Trump is promising. Patients and taxpayers are paying the exorbitant prices Gilead demands. Gilead should pay the $13 billion in taxes it owes. So should the other 50 U.S. multinational corporations that hold the vast majority of the $2.6 trillion in untaxed profits offshore.”