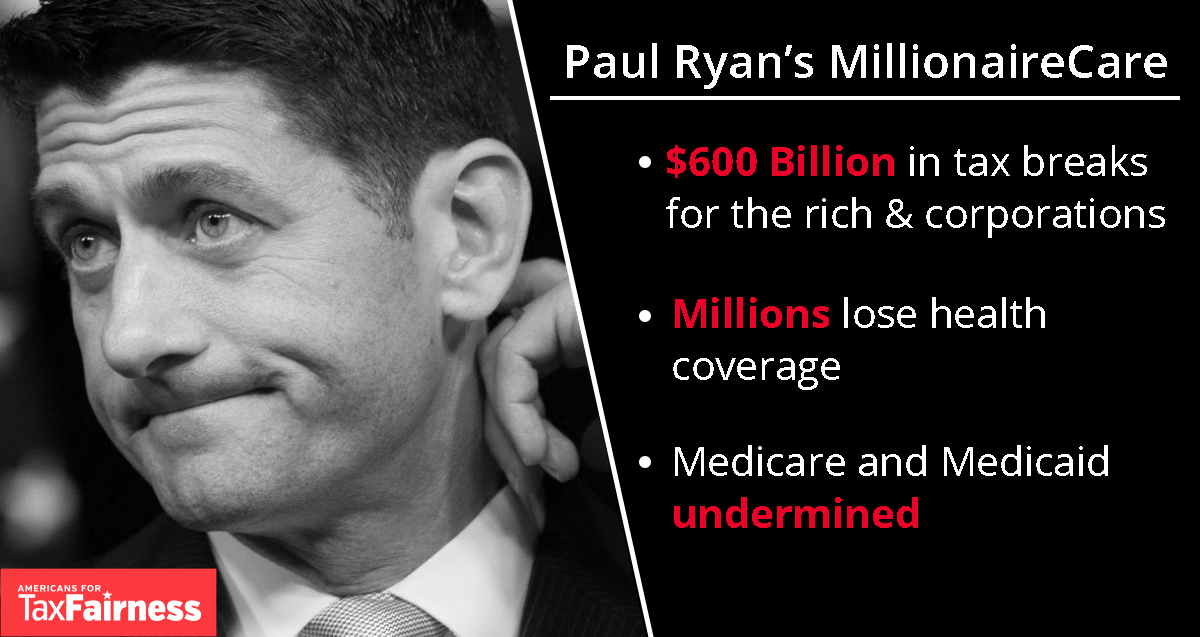 WASHINGTON, D.C.—Americans for Tax Fairness Executive Director Frank Clemente made the following statement in response to the House Republicans’ legislation to repeal and replace the Affordable Care Act:

“The House Republicans disastrous plan to dismantle the Affordable Care Act puts at risk the health coverage of millions of Americans while handing $465 billion in tax breaks to the wealthiest Americans and the biggest health insurance and prescription drug corporations.

“Quite simply, ACA repeal means the rich will get richer and millions will lose their health care.

“The GOP’s plan—which is likely supported by President Trump—provides the first big tax breaks among many that they hope to give the wealthy and Washington special interests this year.

“Under the House Republican plan, the richest 400 U.S. families would each get a $7 million annual tax break, while working families would be left to fend for themselves with inadequate tax credits to buy health insurance. The government will no longer guarantee they can afford coverage.

“One of the major achievements of the Affordable Care Act is that it has decreased economic inequality even as it improves the nation’s health. It’s done this by taxing the wealthy and insurance and prescription drug corporations, and using those tax dollars to help 20 million low- and middle-income Americans afford health care.

“Now, instead of asking the richest Americans and most profitable corporations to pay their fair share, the Republican plan hurts low- and moderate-income families and seniors by slashing financial support to buy health insurance, drastically cutting Medicaid, and hurting the long-term funding of Medicare.

“We must stop this massive shift of wealth away from working families and seniors up to the wealthy and profitable corporations. We need a tax system and a health care system that works for all of us, not just the wealthy few.”