WASHINGTON, D.C.—Top insurers across the country are requesting huge health insurance premium increases for 2019 due to the Trump-GOP tax-cut law and other Trump administration actions that are undermining the Affordable Care Act (ACA).

According to initial filings in six states and the District of Columbia, companies are requesting average statewide premium increases of 15% in 2019 for individuals in ACA-compliant plans participating in ACA exchanges, according to Kaiser Family Foundation and state insurer data [See Table 1 below]. Rate filings have varied wildly: a Maryland insurer is seeking a 91% increase over 2018 premiums and another in Minnesota is proposing a 12.4% premium reduction.

Increases in the most popular “benchmark” silver plans for a 40-year old non-smoker in 11 states and metro areas are proposed to jump by an average of 14%, with the monthly premiums climbing from an average of $407 to $464—or nearly $700 for the year—according to Kaiser’s analysis. [See Table 2] These are the monthly premiums before applying a tax credit, which could significantly reduce costs for many getting ACA-plan coverage.

In most cases, insurance companies are specifically citing Trump-GOP policies, including continued efforts to repeal the ACA in Congress, administrative efforts to undermine the ACA’s regulatory provisions, and changes to the individual mandate in the tax law as reasons for the proposed hikes in premiums. The mandate requires most Americans to buy a minimum level of health coverage if they can afford it or pay a penalty. The penalty was eliminated by the Trump-GOP tax law, saving $314 billion (p. 2) that is being used to partially pay for tax cuts mostly for the wealthy and corporations, such as prescription drug firms and health insurers. The Congressional Budget Office (CBO) estimates that this change will cause 13 million people to lose health care coverage by 2025, and ACA insurance premiums to spike by 10%, on average, most years for the next decade.

The effect of the Trump-GOP tax law on insurance premiums can be seen in one state, New York, as explained by this letter from EmblemHealth that recently notified policyholders of a proposed 25% increase in premiums due in part to what the company explained was:

“Removal of the Individual Mandate. The individual mandate requires more Americans to buy a minimum level of health coverage. This widens the risk pool to include both healthy and sick people.  By eliminating the mandate, members may easily sign up for insurance when sick and drop coverage when they don’t need it, causing the overall risk pool to narrow and costs to rise. When only sicker people buy health coverage it costs more.”

The premium increases due to the Trump-GOP tax law will be steepest for older adults, resulting in an “age tax,” according to AARP. For instance, the average nationwide premium increase for a 50-year-old could be $890 in 2019, but it could be $1,490 for a 64-year-old.

“Taking health care coverage from working families while giving huge tax cuts to the wealthy and big corporations makes absolutely no sense,” said Frank Clemente, executive director, Americans for Tax Fairness. “The cost of these tax cuts is estimated to be nearly $2 trillion, driving up the national debt. To reduce the debt, President Trump and Republicans in Congress have both proposed budgets this year that would slash Social Security, Medicare, Medicaid and education. This is not the way to make America great.”

Companies, such as New York’s EmblemHealth, have also cited the higher costs of new treatments and pharmacy drugs, and non-payment of cost-sharing reductions (CSR), which ended in October 2017, as causing costlier premiums. The discontinuance of CSR payments by the Trump administration and other harmful actions taken by the administration to undermine the ACA insurance marketplace are explained in more detail below.

Trump’s Department of Justice is arguing in court that the tax law’s repeal of the penalty for not buying insurance renders the ACA’s individual mandate unconstitutional. They further argue that if this is true, then the requirement for insurance companies to sell insurance to anyone and for similar prices (regardless of age, gender, health status, occupation or other factors) should be voided. This will likely result in insurance companies refusing to sell insurance to people with preexisting conditions and charging a lot more based on someone’s health conditions or other factors—forms of discrimination the ACA was designed to end.

Additional ACA market instability was created by President Trump’s decision in 2017 to end federal cost sharing reduction (CSR) payments to insurance companies that lowered deductibles, co-payments and other out-of-pocket expenses for lower-income patients. Whether or not insurers get CSR payments, they are required by law to continue providing subsidies that make coverage more affordable for about six million low- to moderate-income people insured through ACA exchanges. CBO estimated that ending CSR payments would raise premiums by 20% on average for 2018 and by 25% in 2020. The Kaiser Family Foundation found that insurers requested premium increases for 2018 ranging from 7% to 38% due to the discontinuation of CSR payments.

Another proposed Trump regulation would allow people to buy short-term, limited duration insurance (STLDI) plans for up to 12 months that can be continually renewed. Under these short-term plans, which were limited to just three months under the ACA, people with preexisting conditions can be charged more and the plans may not include coverage for maternity care, mental health treatment or prescription drugs. Nevertheless, healthy people may be diverted away from the individual market to buy these cheaper “junk plans,” driving up the average cost of premiums for everyone else. The expansion of short-term health plans could increase premiums by 1.7% in the short term and up to 6.6% in the longer term.

The Trump administration has also issued a new rule expanding “association health plans” (AHPs) that offer lower rates in exchange for fewer benefits and looser consumer protections. Like STLDIs, such plans would also siphon away younger and healthier people from the ACA plans. This change alone is estimated to raise premiums in the individual market by up to 4%.

In addition, a new proposal to repeal and replace the ACA was released in June by the “Health Policy Consensus Group”—a coalition of conservative groups along with former Senator Rick Santorum and Kentucky Governor Matt Bevin. The proposal, which echoes the Graham-Cassidy bill that failed in the Senate last year, would take healthcare away from millions of Americans, gut protections for people with preexisting conditions, increase premiums for older adults, and further destabilize the ACA market. Supporters of this latest effort say the Senate could take action on the proposal by August.

All the uncertainty created by these actions and the likelihood of shrinking risk pools is leading some insurers to leave the individual market altogether, causing a further premium spike that results from reduced competition in many regions. 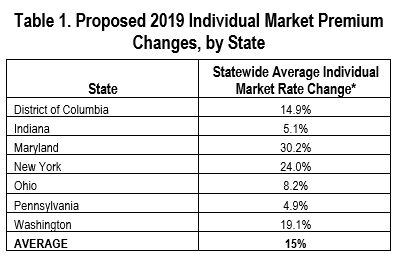 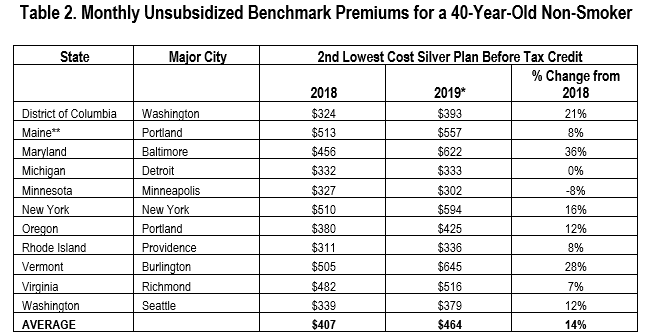 Table 1: * Statewide individual market average rate change is only shown if an
average was provided by the state through a press release.
Note: 2019 premium rate changes are still preliminary and subject to change.