(Washington, D.C.)—While millions of people will lose their health insurance and health coverage as a result of Republican plans to repeal the Affordable Care Act (ACA), the nation’s 8 largest health insurance corporations will get a tax cut of about $72 billion over the next decade, according to new estimates from Americans for Tax Fairness. These companies will get nearly half of the $145 billion 10-year tax cut for the entire insurance industry estimated by the Joint Committee on Taxation.

“It’s appalling that Republicans in Congress would yank healthcare from 20 million people and give insurance companies a $72 billion tax cut,” said Frank Clemente, executive director of Americans for Tax Fairness. “Outrageous. President Trump promised not to cut Medicaid, and Republicans should keep that promise. We can’t afford any health care legislation that takes coverage away from Americans so that wealthy corporations can have a tax cut.”

These large insurance companies have collectively increased their U.S. profits by one-third between 2011 and 2016 as the Affordable Care Act kicked into place—from $19.1 billion in 2011 to $25.3 billion-in 2016. These companies are very profitable and do not need a $72 billion tax cut.

They especially don’t need a tax cut that would be paid for by steep Medicaid cuts and over 20 million Americans losing access to health coverage. 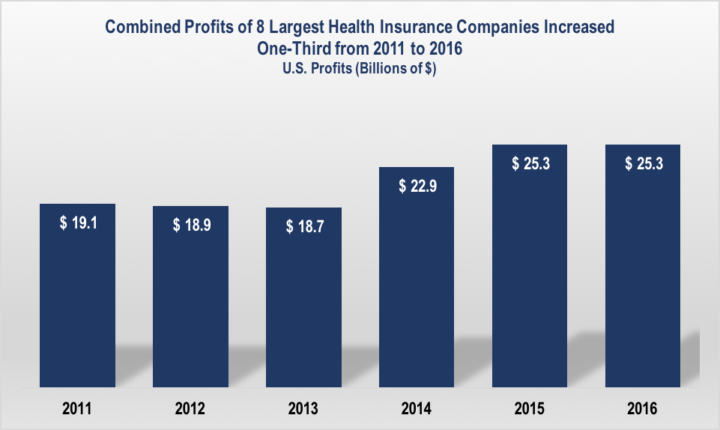 Source: Institute on Taxation and Economic Policy and ATF calculations based on companies’ 10K filings with the Securities and Exchange Commission. Data is available here.

As part of the ACA, a fee was levied on health insurance providers that benefited from millions of new customers. Each company’s share of the fee is based on their market share of net premiums collected from covered entities under the ACA. The fee went into effect in 2014, when the overall fee for the industry was set at $8 billion. For 2015 and 2016, the industry-wide fee was set at $11.3 billion. The 2016 Consolidated Appropriations bill suspended the fee for 2017, but under current law it will be reinstated in 2018 at $14.3 billion. Each year thereafter, the industry-wide fee will increase according to the overall rate of premium growth in the health care industry.

We estimate each company’s savings from 2018 through 2026 by multiplying the company’s average share of the industry-wide fee by the $145 billion that the Joint Committee on Taxation estimates the repeal of the fee will cost in revenues over the next 10 years.