ANOTHER DAY, ANOTHER CORPORATE TAX BREAK

WASHINGTON, D.C. – A new analysis from Americans for Tax Fairness of medical device industry revenue and profits shows that the industry is doing quite well and not in need of a new tax cut from the House of Representatives, which is voting this week to repeal a modest tax on manufacturers and importers of medical devices that helps pay the healthcare coverage for 20 million Americans under the Affordable Care Act (ACA).

Repealing the 2.3% tax on medical devices, which translates to an effective rate of 1.8% because corporations can deduct the tax as a cost of business from their federal taxes, will give large, profitable corporations a $20 billion tax break over 10 years, according to the Joint Committee on Taxation (JCT). That’s on top of the tax breaks President Trump and the GOP have lavished on corporations this year with December’s tax bill, which cut the overall corporate tax rate from 35% to 21% and cut the tax rate on accumulated offshore profits from 35% to at most 15%, less foreign taxes paid.

ATF’s analysis (see chart below) of the 10 largest medical device companies shows that they had annual revenues of $135 billion in 2017, pre-tax profits of $12.4 billion, and $153 billion in untaxed offshore profits eligible for the new U.S. tax discount.

The medical device tax was part of the Affordable Care Act passed in 2010 to help pay for the law’s health insurance subsidies. Congress passed a two-year moratorium on collecting the tax in 2015 and extended it for another two years with passage of the stop-gap spending bill in January. But lobbyists for the medical device industry haven’t given up and are once again pushing Congress for outright repeal of the tax.

“Health insurance coverage for 20 million Americans should not be put at risk for the sake of one very profitable industry’s bottom line,” said Frank Clemente, executive director of Americans for Tax Fairness. “No more gluttony. Repeal would be yet another tax giveaway to an industry that doesn’t need the help by taking away from those who do. Since repealing the medical device tax would be another corporate tax break that isn’t paid for, it will either add to the deficit or average Americans will end up footing the bill.”

Medical supply lobbyists have spent about $30 million each year between 2010 and 2017 to convince Congress to kill the tax and push other industry priorities, according to OpenSecrets.org. Lobbyists claim that the 2.3% tax on such devices as catheters, heart stents, artificial joints surgical gloves and dental instruments would lead to thousands of job losses and restrict investment and innovation. (The tax does not apply to eyeglasses, contacts, hearing aids, wheelchairs or any other device the public generally buys for personal use).

But their claims aren’t backed up by facts. A report from the nonpartisan Congressional Research Service in 2015 concluded that the tax is unlikely to hurt the profits of device companies, estimating that it will reduce industry output and employment by no more than 0.2 percent (the report was prior to the most recent corporate tax cuts). The job loss from the tax, the report said, “is more likely to be in the range of negligible, or zero.”

The Washington Post fact checker has rated claims by House Ways and Means Committee chairman Kevin Brady that the tax has caused the loss of 20,000 American jobs worthy of two Pinocchios.

Indeed, research by leading accounting firm Ernst & Young found that profits for U.S. corporations that specialize in medical technology jumped by almost a third (p. 35)—from $8.6 billion to $11.4 billion—between 2012 and 2013, the year the tax went into effect. By 2016, industry profits had grown to $12.6 billion (p. 42).  Revenues had basically stayed steady over that time period.  This is hardly the picture of an industry in crisis.

With millions more covered by health insurance from the subsides in the ACA partly financed by the tax, the medical device industry is expected to have a significantly bigger market and more sales.

“Congress needs to do the right thing and stop their tax giveaways to profitable corporations when millions of people continue to suffer from the spiraling costs of health care premiums, prescription drugs, co-pays and deductibles,” Clemente said. “We all need to contribute to the health care needs of people who can’t afford it, especially big corporations who continue to get tax breaks and aren’t paying their fair share.” 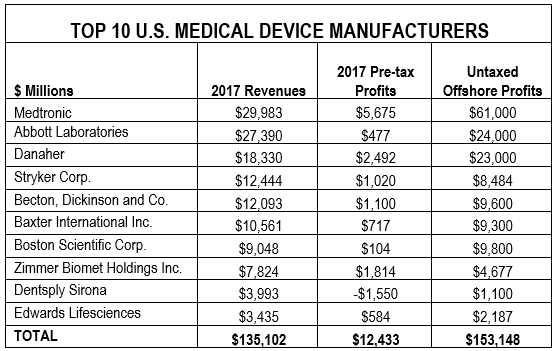