WASHINGTON, D.C. – Tuesday’s outcome in the midterm elections was a strong rebuke of the tax and economic policies of President Trump and the Republican controlled Congress, said Frank Clemente, executive director of Americans for Tax Fairness.

“The outcome of key races where taxes and the tax cut law were factors demonstrate that the 2018 election has put to rest the belief that promising voters tax cuts is a magic elixir for winning campaigns,” Clemente said, “or that working families will vote for candidates who support trickle-down tax cuts favoring the wealthy and well-connected and threatening working family priorities like Social Security, Medicare and Medicaid.”

Republican candidates ran more ads on TV featuring taxes than any other issue but infrequently mentioned the Trump-GOP tax cuts, their signature legislative achievement, showing that tax cuts have lost their potency as an issue. Data from the Wesleyan Media Project and analyzed by ATF show that tax issues were mentioned in 33% of the GOP TV ads, but the Trump-GOP tax cut law was specifically mentioned in just 12% of their ads between January and October. [See chart]

The Trump-GOP tax cuts failed as a winning message due to coordinated and concerted message discipline by those opposed to the law, including groups like Americans for Tax Fairness. Essentially, Republicans “lost the messaging battle” on tax cuts, according to a Sept. 2 polling memo prepared for the Republican National Committee. Progressives exposed the truth that the $2 trillion Trump-GOP tax cuts disproportionately favor the wealthy and big corporations and threaten cuts to Social Security, Medicare and Medicare. The message was widely echoed in newspaper endorsements of Democratic challengers. 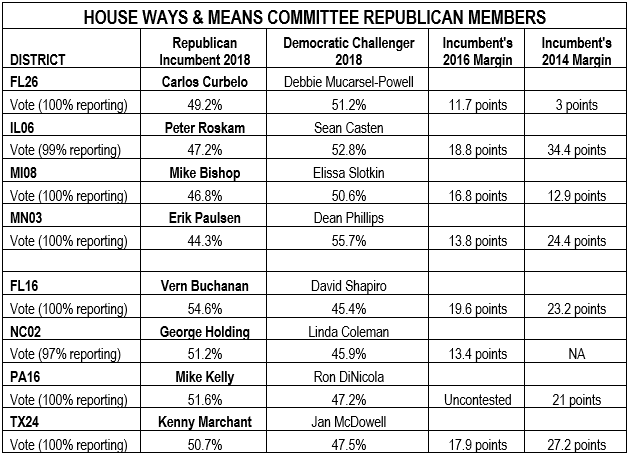 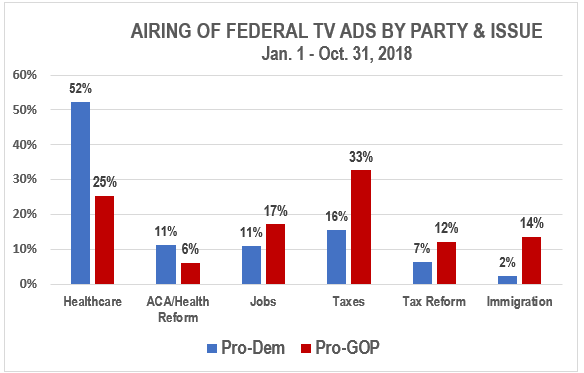 Source: Data from Wesleyan Media Project analyzed by Americans for Tax Fairness and available at: https://bit.ly/2JN7umI. Note: there is overlap in the data between “healthcare” and “ACA/Health Reform” and “tax” and “tax reform” issues so these categories are not cumulative.

“When the tax cut law was passed, Republicans were overjoyed, thinking it was their ticket to reelection in the midterms,” Clemente said. “But by exposing the truth that the law overwhelmingly benefits the wealthy, big corporations and powerful donors, the law became radioactive for many GOP candidates.”

A key example is the reelection bid of six-term Rep. Peter Roskam (R-IL), who chaired the tax subcommittee of the Ways & Means Committee when the Trump-GOP tax law was crafted. Shortly after its passage last December, Roskam argued that the law had jump-started economic growth, replenished Medicare’s health insurance fund, galvanized manufacturing in his district and spurred companies to hire more workers.

But by the time the campaign rolled around, he stopped talking about it. In fact, Roskam failed to air a single ad touting the law he helped craft. Instead, his opponent, businessman Sean Casten, aired campaign ads slamming Roskam for his support of the tax cuts. In the final debate between the two candidates in late October, Roskam was on the defensive about the tax cut law and the growing deficit it has caused, and tried to back away from comments by Republican Senate Leader Mitch McConnell suggesting the GOP would look to cuts in Medicare and Medicaid to reduce the deficit.

Similarly, taxes were a central issue in the contest between Minnesota Republican Rep. Eric Paulsen, another member of the House Ways & Means Committee, and Democratic challenger Dean Phillips who beat Paulsen 55.7% to 44.3%. A conservative political action committee aired TV spots supporting Paulsen and the tax cuts, but was countered by Democratic House Majority PAC ads that blasted Paulsen for supporting tax cuts for the wealthy that threatened health care coverage for the elderly and other services. Phillips won the endorsement from his local paper, which wrote, “Paulsen’s unapologetic support of the deficit-inflating tax bill (to the tune of $1.3 trillion) is disappointing.”

Americans for Tax Fairness will soon release a more extensive report on how the tax issue impacted midterm races.