THE PFIZER MYTH: DRUG COMPANY HAS NOT LOWERED PRICES

Pfzier delayed another increase, which would have been the second this year and fourth in 18 months. Despite billions in Trump-GOP tax cuts, the drug company’s prices are still too high.

WASHINGTON, D.C. – After pharmaceutical giant Pfizer hiked the prices of more than 40 of its prescription drugs on July 1, Pfizer announced yesterday it would defer those price increases until President Trump’s vague promises of curbing drug prices are put into action.

Pfizer’s move last week to increase prices drew criticism from both President Trump and Americans for Tax Fairness, which pointed out that Pfizer was making medications more unaffordable after receiving an estimated $25.5 billion tax cut on its nearly $200 billion in untaxed profits held offshore and a $1 billion tax cut on 2018 profits from the Trump-GOP tax law.

Pfizer suddenly reversed course after Trump publicly attacked the price hikes on Twitter. But even without this latest round of increases, the cost of many of Pfizer’s drugs has soared in recent years. The price of Pfizer’s top-selling drugs, including Lipitor, Celebrex, Neurontin and Zoloft, has been raised by about 30% on average since just before Trump took office, according to data from Pharmacy Benefits Consultants. The increases announced this month would have been the fourth round of price hikes since the start of 2017, beginning with increases in January and June of last year that raised the prices for many of its drugs by an average of 20% for the year. In January 2018, Pfizer further upped the prices for 116 of its drugs by up to 9.5%. 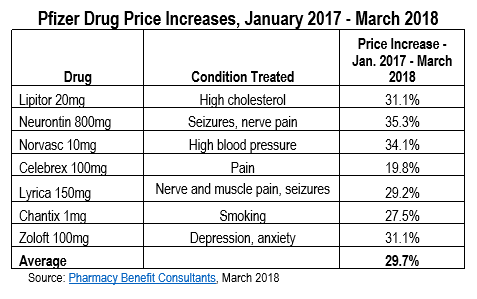 “No one should be fooled by Pfizer’s latest PR stunt,” said Frank Clemente, executive director of Americans for Tax Fairness. “The company is not lowering prices. It’s delaying temporarily a second price hike this year. The president can crow that he got Pfizer to back down this time. We’ll see in six months. But Pfizer and its rich CEO and shareholders are laughing all the way to the bank thanks to the $25 billion-plus in tax breaks Trump handed them in his tax giveaway. Pfizer got billions in tax cuts and continues to price-gouge patients. That’s what I call the art of the deal.”

The price hikes come just a month after President Trump claimed that major drug companies would be announcing “voluntary massive drops in [drug] prices within two weeks.” No such announcement has been forthcoming. In fact, more than 50 drug makers have raised prices since Trump’s announcement, according to the Elsevier Gold Standard Drug Database (as reported by Marketplace). A Wells Fargo report found 104 price increases in June and the first two days of July, with an average jump of 31.5 percent and a median increase of 9.4 percent. That followed 48 increases in May. The list price hikes don’t factor in discounts that companies may provide to some insurance companies and patients.