“If this resolution fails, the public should know which members of Congress are continuing to allow President Trump to hide his business dealings and possible conflicts of interest, and the ways that he could gain personally from his tax (reform) plan,” said Frank Clemente, executive director of Americans for Tax Fairness.

This article appeared in the Seattle Post-Intelligencer.

The House Ways and Means Committee has blocked a bid by Democrats to obtain the income tax returns that President Trump has refused to release, the first president or major-party nominee since the 1970s not to share this information with American voters.

Republican Rep. Dave Reichert, the other Washington House member on Ways and Means, voted with fellow GOP members to kill the resolution.

The resolution asked the U.S. Treasury Department to supply Trump’s full tax returns from 2006 to 2015, plus additional documentation.

It asked Treasury for any Trump debts held by foreign governments and foreign companies.  It requested his investments in foreign countries and foreign enterprises.  As well, the Pascrell resolution asked for information on any tax shelters, corporate structures and tax-avoidance maneuvers or loopholes used to eliminate tax liability.

DelBene, a former Microsoft executive, spoke for the resolution and argued:

“This President is breaking 40 years of precedent with his alarming lack of financial transparency and his refusal to release his tax returns is a serious red flag. Given the President’s evasive maneuvering, Congress has a constitutional responsibility to obtain the records needed to perform rigorous, unbiased oversight.”

Reichert did not speak during the committee’s debate.

Reichert has what is usually a coveted position in Congress.  He is a senior member of an important committee.  He chairs the trade subcommittee of Ways and Means.  Last year, he helped rescue the U.S. Export-Import Bank, which was marked for extinction by right-wing Republicans and such groups as the Heritage Foundation.

In the early weeks of the Trump administration, however, Reichert has found himself on the hot seat after voting for “Trumpcare” in committee, and opposing bids to force release of Trump’s tax documents.

Hundreds of constituents marched on Reichert’s office in Issaquah late in February, challenging his refusal to hold town meetings and demanding that he oppose repeal of the Affordable Care Act.

The Trump tax resolution was obviously designed to put Reichert and other Republicans on the spot.

“If this resolution fails, the public should know which members of Congress are continuing to allow President Trump to hide his business dealings and possible conflicts of interest, and the ways that he could gain personally from his tax (reform) plan,” said Frank Clemente, executive director of Americans for Tax Fairness.

The Democratic Congressional Campaign Committee has launched an advertising campaign against Reichert.  It is an old tactic, tried in the last decade — with absolutely no success — by the liberal group MoveOn.org

He does, however, represent a district that Hillary Clinton carried last November. 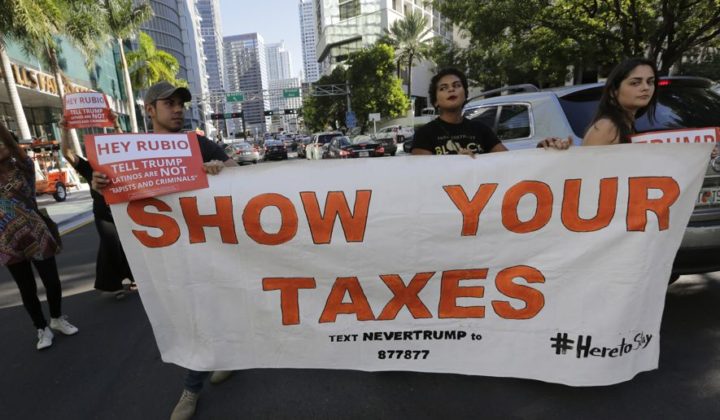