Nation’s Tycoons Have Enjoyed a $1.8 Trillion Jump in Fortune Since Pandemic Start; Their Rise in Riches Alone Could Pay for Biden’s Proposed Family Investments

The nation’s 713 billionaires have seen their collective wealth grow by an astronomical $1.76 trillion, or nearly 60%, since the start of the pandemic in March 2020, according to the latest report from Americans for Tax Fairness (ATF) and the Institute for Policy Studies (IPS) analyzing Forbes wealth data. This billionaire bonanza provides a case study of what’s wrong with our current economic and tax systems, as Democrats in Congress debate President Biden’s Build Back Better agenda to invest in America’s families by more fairly taxing the rich and corporations.

That leap in fortune among a tiny group of Americans is nearly enough to fund the entire $1.8 trillion ten-year cost of Biden’s American Families Plan, which would make critical investments in education, childcare, healthcare, nutrition and more for tens of millions of Americans. It is also one-half the $3.5 trillion rumored cost of the investment package that Democrats in the U.S. Senate may put up for a vote as early as next week. The total wealth of American billionaires is now $4.7 trillion.

The $138 billion wealth growth of Tesla founder Elon Musk alone over the last 16 months could cover the costs over ten years of tuition for 5.5 million community college students and feed 29 million low-income public school kids over the summer — and still leave Musk $4 billion richer than he was before COVID.

But very little if any of that ballooning billionaire wealth will ever be put to such public use. That’s because even though such asset growth is the primary source of income for the rich, under current rules almost none of that income will ever be taxed.

ATF and IPS have tracked the pandemic-era growth in the fortune of the nation’s richest individuals since last summer. This latest report covers the period March 18, 2020, through July 9, 2021. The billionaire wealth bonanza over the past 16 months is all the more appalling when contrasted with the coronavirus misery of ordinary Americans: over 83 million have lost jobs, almost 34 million have been sickened by the virus, and over 607,000 have died from it.

President Biden has proposed tax reforms that would more fairly tax the wealthy, including billionaires, and the big corporations they own through their stock holdings. Because Congressional Republicans have universally rejected such reforms — despite overwhelming public support for them — Democrats are now working out an economic plan that can pass without GOP votes.

The virtual tax-free status of billionaire wealth growth was highlighted last month by a report from ProPublica. It revealed that 25 top billionaires paid on average just 3.4% of their wealth-growth in federal taxes and that several, including Jeff Bezos (worth $212 billion on July 9) and Elon Musk (around $163 billion), went multiple recent years paying zero federal income tax.

“There’s not a better symbol of the need for the Biden reforms than tax-free billionaires,” said Frank Clemente, ATF’s executive director. “We can raise some $4 trillion for vital public services simply by ensuring the rich and corporations begin paying their fair share of taxes. In the budget soon to be voted on, Congress needs to reward work, not wealth, ignore the pleadings of special interests and do what voters are demanding.”

“Surging billionaire wealth gains during the pandemic dramatizes the deep economic imbalances in our society,” said Chuck Collins of the Institute for Policy Studies, author of The Wealth Hoarders. “Lawmakers should pay for jobs, infrastructure and investments benefiting working families with targeted taxes on the wealthiest 0.1 percent.”

Due to gaping loopholes in the tax code, increased wealth enjoyed by America’s billionaires and other members of the richest 1% can go untaxed forever. Even when it is taxed the rate is about half that of wage income. President Biden would end those special breaks for millionaires and billionaires as part of his plan to tax wealth and not just work.

Among Biden tax reforms that would tap some of this billionaire wealth growth are:

Americans wholeheartedly support Biden’s proposed tax reforms. A June poll from ALG Research and Hart Research found that two-thirds of the public endorse higher taxes on the wealthy and corporations; respondents believed by over a two-to-one margin that higher taxes on the rich and big firms would help the economy; and by a seven-to-one ratio, poll participants preferred paying for Biden’s proposed investments through such tax reforms rather than adding the cost to the national debt.

A more direct way to tax billionaire wealth is to tax the wealth itself instead of just its growth. If the wealth tax proposed by Sen. Elizabeth Warren had been in effect in 2020, billionaires alone would have paid $114 billion for that year — and would pay an estimated combined total of $1.4 trillion over 10 years.

March 18, 2020 is used as the unofficial beginning of the coronavirus crisis because by then most federal and state economic restrictions responding to the virus were in place. March 18 was also the date that Forbes picked to measure billionaire wealth for the 2020 edition of its annual billionaires’ report, which provided a baseline that ATF and IPS compare periodically with real-time data from the Forbes website. PolitiFact has favorably reviewed this methodology. 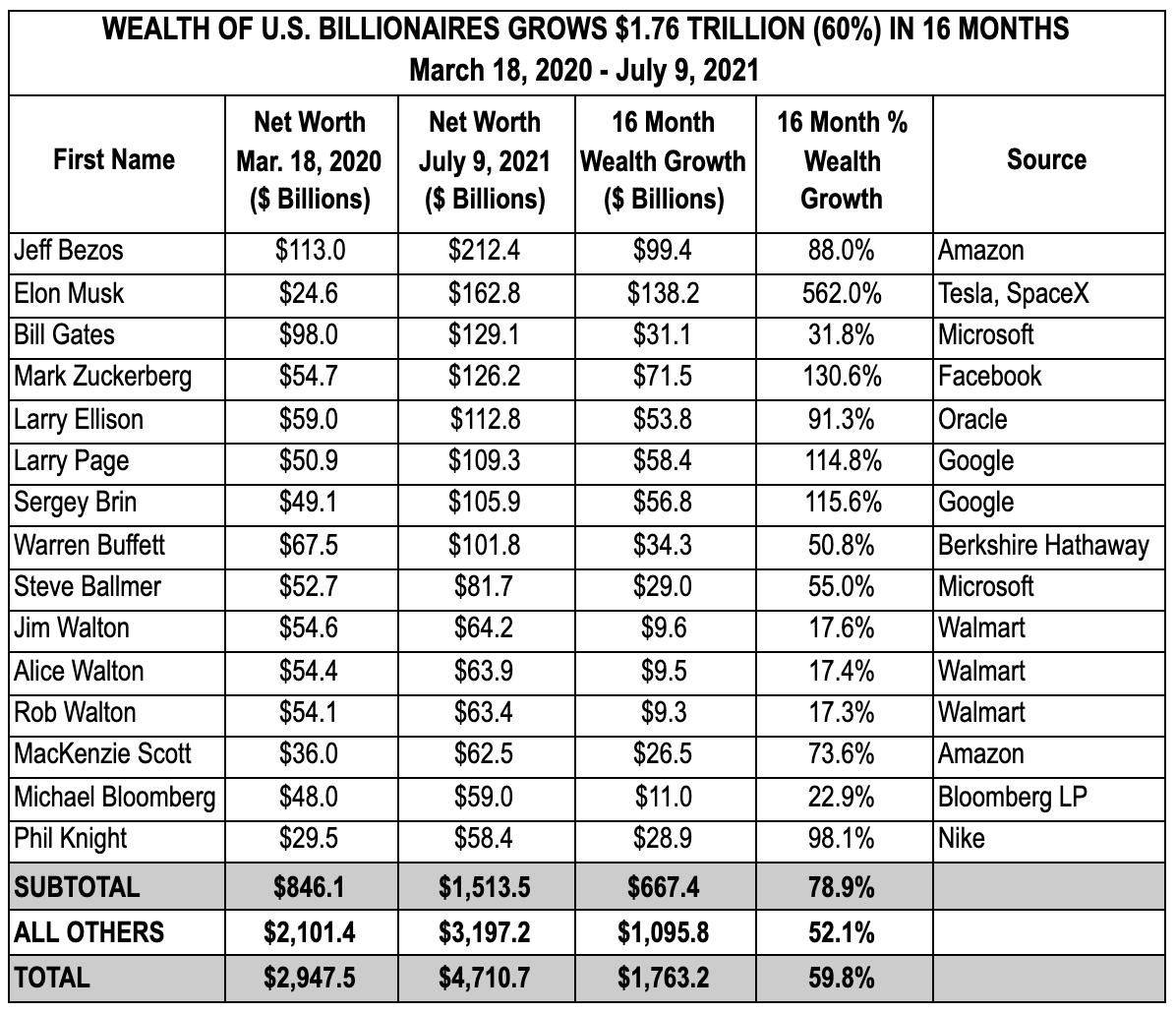