STATEMENT OF AMERICANS FOR TAX FAIRNESS ON MIDTERM ELECTION RESULTS

The following statement was issued by Frank Clemente, executive director of Americans for Tax Fairness:

Through an onslaught of TV ads this fall, Congressional Republicans and their two super PACs tried to make this election a referendum on false claims about increased taxes on the middle class and increased funding for the IRS—and they lost. While the congressional election results are not final, it is clear from preliminary results that the American people did not buy their leading attack against Democrats, and there is no mandate for them to try to push through renewal of the Trump-GOP tax cuts or repeal funding for tax enforcement to catch wealthy and corporate tax cheats.

A Washington Post report (also see chart below) on issue ad spending in the two months before the election found that a total of $209 million was spent on tax ads, with 71% of the spending done by Republican candidates and outside groups. Ads on inflation, which were often also about taxes, totaled another $125 million, with 83% of those ads by the GOP.

These results are consistent with a pre-election TV ads analysis prepared by Americans for Tax Fairness Action Fund, which reviewed 351 ads by candidates and super PACs in frontline races and found that the GOP ran far more ads about taxes that relentlessly attacked Democrats. Those ads mostly falsely claimed that Democrats would raise taxes on people making less than $75,000 a year and unleash an “army of 87,000 IRS agents” on regular taxpayers. 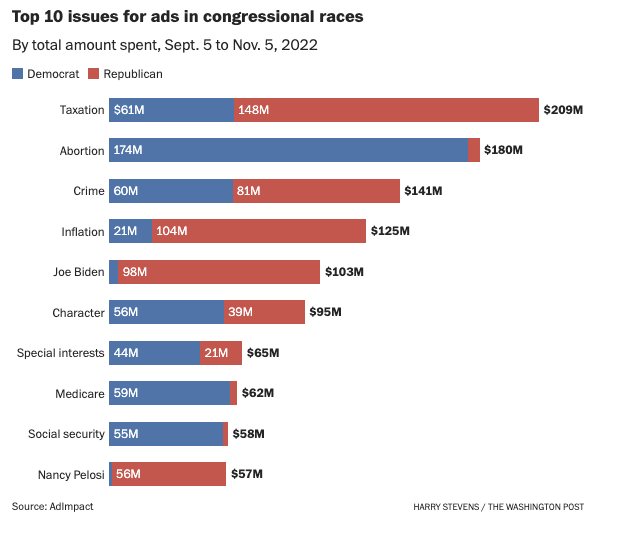 These false claims were made because Democrats had enacted the Inflation Reduction Act into law in August, which made the largest and most profitable corporations pay a 15% minimum income tax, imposed a 1% tax on corporate stock buybacks that affects the rich, and increased IRS funding by $80 billion over the next 10 years with a mandate to increase audits of wealthy and corporate tax cheats.

No “red wave” materialized this week as GOP candidates in both chambers of Congress significantly underperformed expectations. If Republicans are able to secure small majorities in either chamber once all the races are called, they have made it clear their priority will be to push to renew and expand the 2017 Trump-GOP tax cuts and hobble the IRS. But as this week’s outcome makes clear, they will do so without a mandate from the public.

Elected officials from both parties should take note: the public’s support for Reagan-style trickle-down economics is over. Instead, they want a tax system that requires the rich and corporations to pay their fair share, as the Americans for Tax Fairness pre-election poll showed.