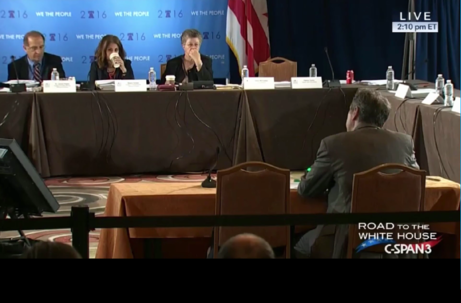 Chairman Cummings and members of the committee, thanks for the opportunity to testify today. I am here on behalf of Americans for Tax Fairness, a coalition of more than 400 organizations with a total of tens of millions of members.

I will address three points about tax fairness and submit more detailed written testimony next week.

Wealthy people don’t pay their fair share of taxes—nor do many big corporations.

A lot of the income of the rich is shielded from taxation through loopholes, or is more lightly taxed than the income of working people. That’s why the 400 richest Americans—who had an astonishing average income of $86 million in 2013—paid an average tax rate of just 23%. [IRS Table 1, p. 14.] That’s a lower rate than many middle-class families pay.

A major reason for this inequity is that income derived from wealth—from capital gains and dividends—is taxed at about half the rate as income from work.

The rich also benefit from the massive tax avoidance by some of our biggest corporations. That’s because ownership of those corporations through shareholding is so concentrated among the wealthy.

My second point is creating an economy that works for everyone requires a bold and progressive tax reform agenda that raises much more revenue from the wealthy and big corporations.

It’s not enough to dream big. America needs to do big—like we did decades ago. That means raising several trillion dollars in new revenue over the next 10 years to rebuild our families and communities and to create millions of good paying jobs.

It’s needed to fix our roads, bridges, mass transit and water systems. There should be no more Flint, Michigan’s. Quality preschool should be available to all four-year-olds regardless of income. All working parents should have access to affordable child care. All of us want to make college more affordable, some of us want free tuition at public institutions. Major new investments are needed in research to create a clean-energy economy and to find the next generation of medical cures. Our retirement security programs need strengthening.

Instead of aggressively pursuing these initiatives in recent years, we’ve let our public services wither away under austerity budgets demanded by conservatives.

Domestic discretionary spending—the portion of the budget that would pay for the services and investments described above—was 5.1% of the economy in 1980. By 2021, it is projected to be nearly half as much, just 2.8%. [OMB Historical Table 8.4]

We can’t do the big and important things we need to do with so little. We must raise a lot more revenue.

How do we do it in a fair and responsible way? Let’s start by:

1. Taxing wealth like work. The passive investment earnings of Wall Street billionaires should be taxed at the same rate as the salaries and wages of people who get up and go to work every morning.

2. Creating a surcharge above the top marginal tax rate for millionaires and billionaires.

3. Re-establishing an effective and fair estate tax and taxing capital gains when assets are inherited. These reforms would also serve to narrow the wealth gap and curb the tendency towards a permanent American aristocracy.

4. Placing a very small Wall Street Speculation Tax on the trading of stocks, bonds and other financial products.

Perhaps above all, we need to make sure corporations pay their fair share of taxes. Despite an army of lobbyists and millions of dollars in campaign cash fighting reform, we must end the ruinous scandal of pervasive corporate tax dodging.

Corporations need to pay the $700 billion in taxes they owe on the $2.4 trillion in profits they have stashed offshore, most of it in tax havens. [Citizens for Tax Justice]

And our tax system needs to stop encouraging corporations to shift jobs and hide profits offshore. That means ending their ability to indefinitely delay paying U.S. taxes on overseas profits, and making sure that offshore earnings are taxed at the same rate as domestic profits.

Third, it’s time Congress supports what the public wants, not what wealthy donors and well-connected lobbyists can extract from a rigged system.

The American public is very clear where it stands on these issues:

• 61% of the public thinks upper-income people pay too little in taxes; just 15% say they pay too much.

The Pew Research Center found that 61% are bothered a lot by some wealthy people not paying their fair share; 64% feel that way about corporations. [Pew, February 18-22, 2015]

A Pew poll also found that 76% of the public feel that the government is pretty much run by a few big interests looking out for themselves. Just 19% feel it is being run for the benefit of all the people. [Pew, August 27-October 4, 2015]

Here’s one way to change that corrosive public perception: fight like hell to make sure that the wealthy and corporations pay their fair share of taxes. Not only is it the right thing to do for the sake of our nation’s future, it’s also what the public wants.