Senate Bill: Coronavirus Aid, Relief, and Economic Security Act (‘‘CARES Act”)
Bill Text     Section-by-section (taxes only)
Note: there is no Joint Committee on Taxation score of the tax provisions in the Senate bill.

The Senate bill centers on several significant though mostly temporary tax-law changes that would benefit corporations and other businesses. The costs of these changes are $280 billion, according to the Joint Committee on Taxation, or 12% of the total $2.3 trillion package. [See  table on page 6 of this analysis and also here.] The $2.3 trillion is allotted as follows: 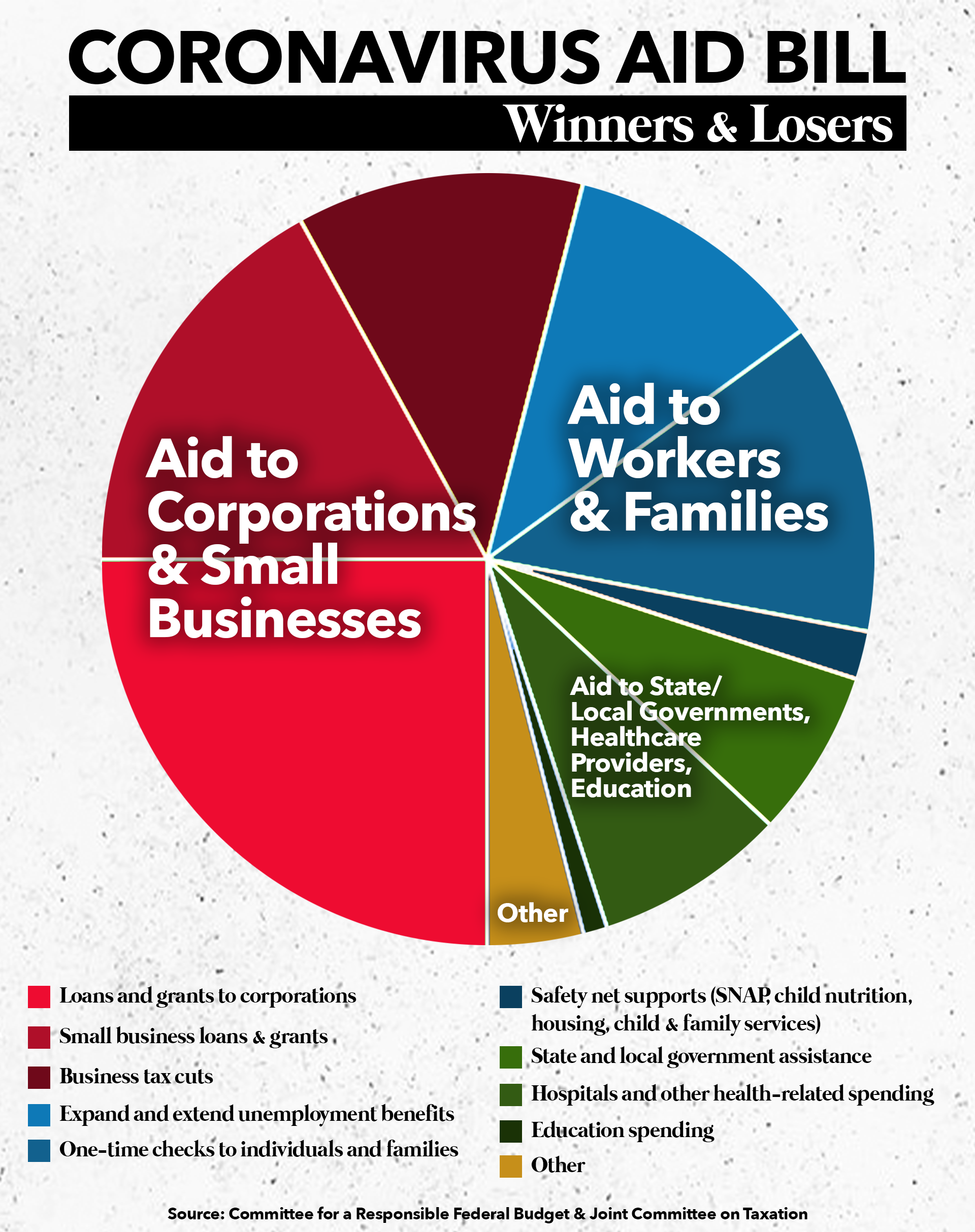 The 2017 Trump-GOP tax law, the Tax Cuts and Jobs Act (TCJA), gave corporations a massive tax cut by slashing the corporate tax rate from 35% to 21%. To partially offset the cost, the law also included some corporate revenue raisers, including limitations on deductions for losses and interest payments. The Senate bill would temporarily roll back several of these revenue raisers and give other breaks to big corporations as well. The resulting tax relief is ill-focused and unnecessarily costly, spending a lot of taxpayer dollars to aid companies that may not be particularly impacted by the economic emergency.

Following are key tax features of the two bills, beginning with provisions they share:

Senate Bill (Sec. 2302): Frees up business revenue during the emergency by deferring current employer (and self-employed) payroll taxes, with half of the amount deferred in 2020 due by the end of 2021 and the other half by the end of 2022. The Social Security trust fund will be made whole in the meantime through general revenues.

Senate Bill (Sec. 2301): This provision gives tax credits to employers who keep workers employed. Eligible employers (including non-profit organizations) would be able to credit 50% of an employee’s eligible compensation, including health benefits, against the employer’s share of Social Security taxes, up to $10,000 every three months (i.e., quarterly). To be eligible a business must have been ordered at least partially shut down as a coronavirus safety measure or have experienced a 50% reduction in gross sales in the same quarter compared to the prior year. The tax credits end when gross sales in a quarter exceed 80% of the comparable quarter in the prior year.

The eligibility of employee wages depends on the size of the employer’s workforce. Those with 100 or fewer workers can take the credit against all their wages, whether or not the employees have been idled by coronavirus business restrictions. Employers with over 100 workers can only take the credit against the wages of workers idled by the emergency.

Wages eligible for the credit are those paid or incurred between March 13 and the end of 2020.

Senate Bill (Sec. 2201): Gives eligible households “recovery rebates” of up to $1,200 per adult, plus $500 per child. Individuals with annual income up to $75,000 ($150,000 for married couples and $112,500 for single parents) qualify for the maximum payment. The Institute on Taxation and Economic Policy estimates the average rebate for households will be $1,720. The size of the rebate is reduced by 5% of the amount income exceeds those thresholds and eventually phases out. There is no minimum income to qualify. The bill provides immediate payments only to those who have filed a tax return for 2019 or 2018 or receive Social Security or railroad retirement benefits, which will be an impediment to getting assistance for those not earning enough to file tax returns.

House Bill (Sec. 201): Gives households payments of $1,500 per person, capped at a total of $7,500. Higher income households (those that wind up with 2020 joint income above $150,000; head of household income above $112,500; or single income above $75,000) would be required to pay back all or part of the payments (depending on their income) over three years. There would be no requirement for existing household income to qualify, so the unemployed and others in deep poverty would be included. The payments would not count as income for the purpose of determining eligibility for other public assistance programs.

Senate Bill (Sec. 2303): To reduce the revenue lost from slashing corporate taxes, the TCJA eliminated the ability of corporations and pass-through businesses (which include sole proprietorships, partnerships and S corporations) to “carry back” losses to previous years, though it extended their ability to subtract such current “net operating losses” (NOL) from future earnings. Corporations accepted limits on their use of NOLs in exchange for a much lower corporate income tax rate.

Section 2303 would temporarily restore “carry back” losses for corporations and extend from two to five the number of previous years’ profits that current losses could be applied against. That extended carry back period includes years before the TCJA came into effect. Current losses are more valuable credited against gains made before the TCJA, when the corporate tax rate was 35%, then they are now, when it’s 21%. In addition, under the 2017 tax law, corporations were limited to offsetting up to 80% of taxable income with a loss; the Senate bill removes that restriction for 2018-2020 so that income can be 100% fully offset. In 2021 and beyond it returns to 80%.

The expanded five-year carry back provision is a huge giveaway—costing $195 billion according to the Joint Committee on Taxation (see table on p. 6), with most of the tax break going to pass-through businesses. Presumably the cost of this tax break will be from large losses many businesses will suffer due to the pandemic. Those losses will easily wipe out many years’ gains, transforming what were once tax liabilities into big refunds.

The bill also inexplicably allows companies that generated losses in 2018 and 2019—before the pandemic—to get rebates for taxes owed in prior years. While this provision will get liquidity (i.e., cash in the form of tax refunds) into the hands of companies during this economic crisis, it will also be a handout to businesses that weren’t well enough managed to generate profits in the growing economy of 2018-2019.

However, unlike the Senate bill the House bill would impose some limits on participation in this benefit. “Pass-through” businesses—non-corporate entities which make up a big part of the economy and received a big tax cut from the Trump-GOP tax law—would not be eligible. To qualify a corporation must impose certain executive pay and “golden parachute” limitations. And any corporation that has returned to shareholders more than 5% of the business’ fair market value via stock buybacks or dividends is disqualified from this tax break.

SENATE PROVISIONS NOT IN HOUSE BILL

In the 2017 tax law, as a partial tradeoff for the temporary allowance of businesses to immediately write off big-ticket purchases (“expensing”), their ability to deduct interest was limited. The Senate bill would loosen the interest deduction limits for the 2019 and 2020 tax years, allowing businesses to deduct half their interest costs rather than just 30%. And it would apply to all businesses, whether affected by the coronavirus pandemic or not—a costly and gratuitous handout. At the time the tax law was enacted, the tighter interest rules were estimated to raise more than $250 billion over 10 years. This temporary relaxation will cost the government some part of that.

Restaurants and other retail establishments have long complained that they were left out of a temporary provision of the Trump-GOP tax law that allows businesses to immediately write off the cost of capital investments. This provision includes them in this expensive tax break for businesses. (It is estimated to cost about $15 billion a year, which was already built into the cost of the Trump-GOP tax law when it passed in 2017.) In the present crisis, restaurant owners should not receive relief unless restaurant employees do as well. This fix to the so-called “qualified improvement property” (QIP) glitch for restaurants should be paired with an economic boost of equal or greater size for working Americans, as was proposed in the Economic Mobility Act in the House. That measure would increase the earned income tax credit in 2019 and 2020 for individuals with no qualifying children and make the child and dependent care tax credits fully refundable during the same period.

HOUSE PROVISIONS NOT IN SENATE BILL

The credit would rise from $2,000 to $3,000 per child aged 6 and over and be $3,600 for children under 6. Residents of Puerto Rico and other territories would be better able to participate in the program.

Sec. 231 doubles the Child and Dependent Care Tax Credit (CDCTC) and increases the phaseout threshold from $15,000 to $120,000, with both amounts indexed to inflation. The CDCTC would be made refundable and the phase-out calculation modified. The amount of employer-provided assistance that can be disregarded when calculating benefits would rise from $5,000 to $10,500. 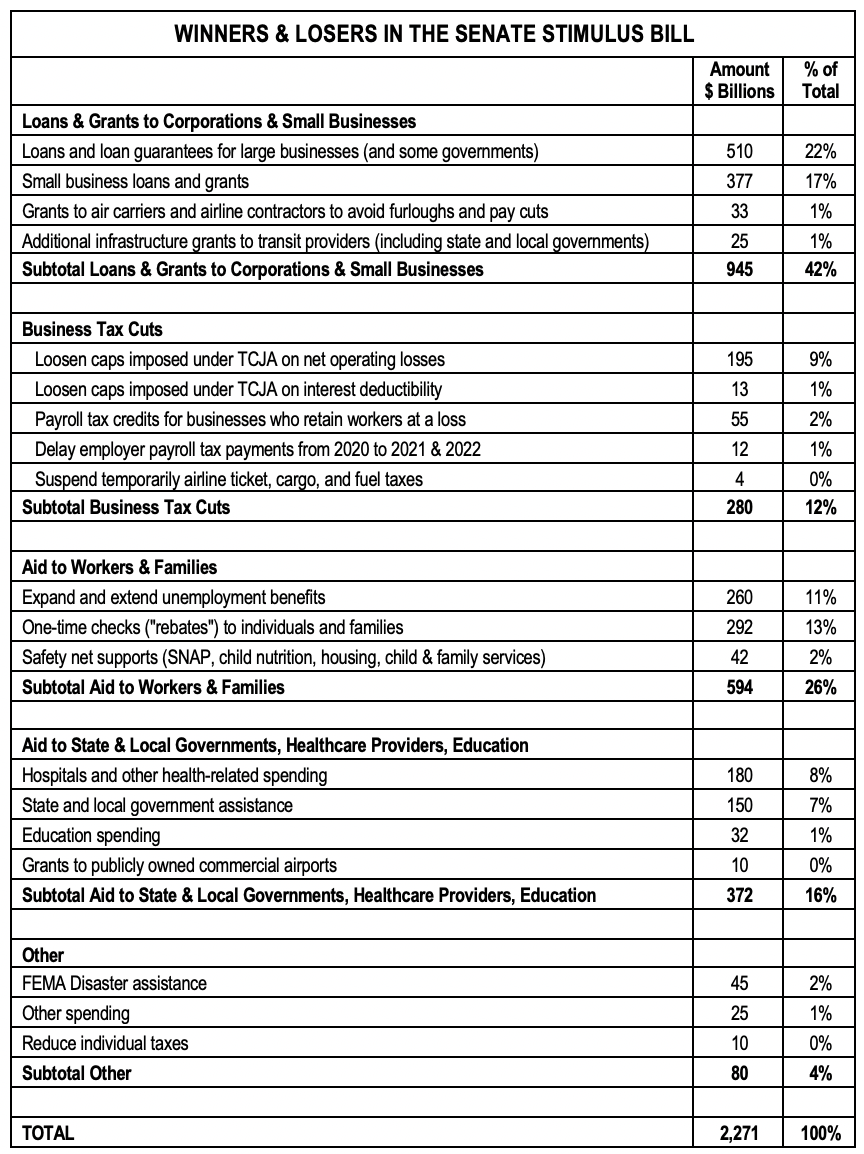