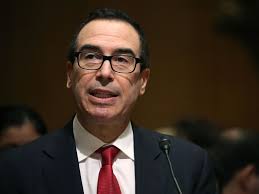 ATF report shows Mnuchin could get $3.3 million annual tax cut from plan
he would be promoting as Treasury Secretary

“The cabinet post chiefly responsible for setting and implementing federal tax policy should be filled by someone who is above reproach. Unfortunately, Mr. Mnuchin has a track record of enriching himself through his banking business at the expense of the vulnerable. Moreover, as a member of the Wall Street elite, he stands to handsomely benefit from preserving and expanding tax loopholes and subsidies benefitting the wealthy and corporations under tax reform, an effort he will lead as Treasury Secretary,” Americans for Tax Fairness Executive Director Frank Clemente wrote in a letter delivered to senators today.

The letter notes that Mnuchin said his top priority will be promoting President Trump’s $6 trillion tax plan.  Mnuchin has misleadingly claimed that “there will be no absolute tax cut for the upper class” under that plan. Numerous experts contradict his assertions, however. The Tax Policy Center, for example, estimates the top 0.1% of households will get an average tax cut of $1.1 million if the Trump tax plan becomes law.

“Given how much Mnuchin stands to personally gain from the Trump tax plan, the public may view Mnuchin’s confirmation as Treasury Secretary as akin to having the bank robber guard the bank,” Clemente said.

A chart showing how ATF calculated Mnuchin’s tax cut under the Trump plan is available here.

Additionally, Mnuchin’s efforts to assist his wealthy investment fund clients in avoiding U.S. taxes indicates his reluctance to close tax loopholes that benefit the super-rich and encourage American corporations to shift resources offshore. In his financial disclosure, Mnuchin noted that two of the investment funds he manages, Dune Capital Partners LLC and Dune Capital International Ltd, are incorporated in Anguilla and the Cayman Islands, respectively. Both are widely considered tax havens.

“As Secretary, Mr. Mnuchin could well continue this pattern of helping the rich get richer while depriving the government of revenues needed for critical public investments like education and infrastructure,” Clemente wrote.

“We need a Treasury Secretary who will support an economy and a tax system that works for everyone, not just the wealthy and corporations. We urge you to vote ‘no’ on the upcoming proposed confirmation of Steven Mnuchin as Treasury Secretary,” Clemente concluded