TAX CUTS FOR “INSOURCING” CORPORATIONS WOULD BE A COSTLY MISTAKE

The Trump Administration has floated the idea of cutting the corporate tax rate in half—from 21% to 10.5%—for companies that bring offshore production back to the U.S. This massive corporate tax cut would be a costly giveaway to the few corporations profiting during the pandemic. It would waste precious public revenue needed to respond to the coronavirus crisis, and make long-term investments in education, healthcare, and infrastructure even more difficult. If the U.S. is to have a strong economy, corporations and the wealthy who own most corporate stock must begin to pay their fair share of taxes.

Close these loopholes and corporations will have strong incentives to bring production home. That is what the “No Tax Breaks for Outsourcing Act” before the House and Senate would do; the House bill authored by Rep. Lloyd Doggett already has 112 cosponsors. 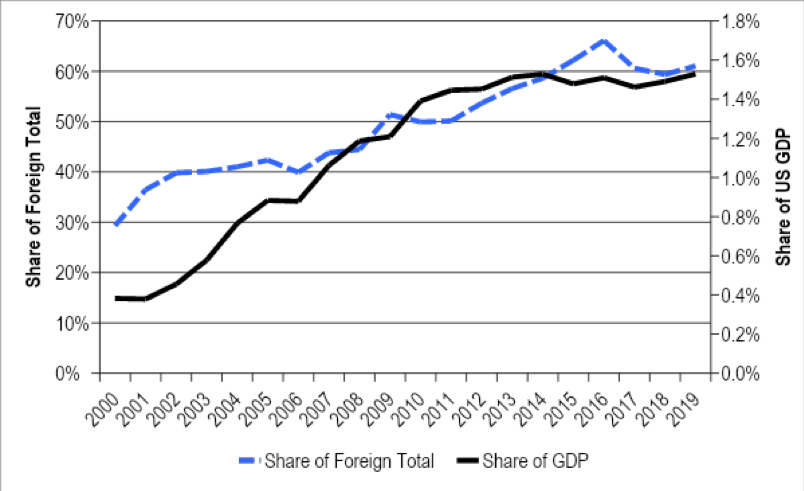 Source: Kimberly A. Clausing, Fixing Five Flaws of the Tax Cuts and Jobs Act, June 13, 2019.
Data are from the U.S. Bureau of Economic Analysis. Data for 2019 are based on the first three quarters of data scaled by (4/3). The big seven tax havens are: Bermuda, the Caymans, Ireland, Luxembourg, the Netherlands, Singapore, and Switzerland.