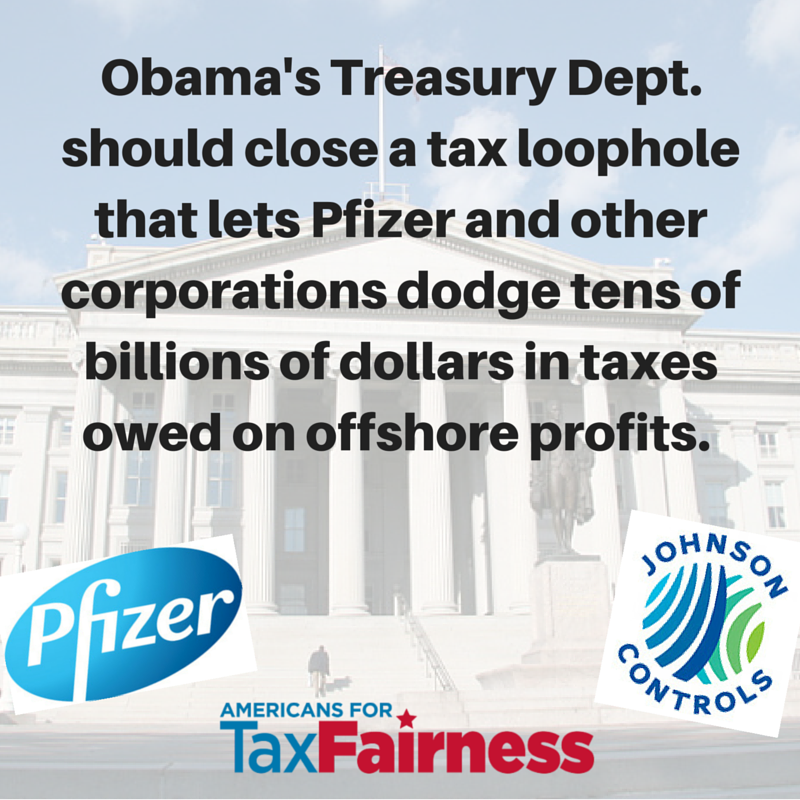 WASHINGTON, D.C.—Today, Americans for Tax Fairness called for the U.S. Treasury Department to use its authority to deny the tax benefits of two proposed mergers between American and foreign corporations based in Ireland, a tax haven: Johnson Controls/Tyco International and Pfizer/Allergan.

The tax benefits of these corporate inversions would be denied if Treasury revises a Notice it issued in 2014 intended to remove critical tax breaks U.S. companies receive when they invert with a foreign company based in a tax haven.

ATF has called these mergers “non-inversion inversions” because, although not within the technical tax definition of an inversion, the legal maneuver has the same effect as an inversion: to dodge large amounts of U.S. taxes on offshore profits through a business combination with a smaller foreign firm.

Johnson Controls had $8.1 billion in offshore profits in 2015 on which it will likely be able to avoid paying U.S. income taxes should the proposed merger be completed. Pfizer has as much as $140 billion in profits offshore, on which it could avoid paying any U.S. taxes due to its merger.

An analysis prepared by Professor Reuven Avi-Yonah, an international tax expert at the University of Michigan Law School, explains how these companies can use mergers to get around current Treasury Department rules to dodge taxes on their offshore profits and how Treasury could modify its 2014 rule to block Pfizer and Johnson Controls from taking advantage of these tax breaks.

“Treasury has the authority to apply the 2014 Notice to transactions like Pfizer/Allergan and Johnson Controls/Tyco by executive action,” said Avi-Yonah. “It does not need Congress to act. This remedy would result in U.S. taxes on any distributions of the offshore profits to the newly formed foreign parent company. That would probably stop these inversions in their tracks.”

“Pfizer and Johnson Controls are exploiting a giant loophole that the Treasury Department needs to fix – and fast,” said Frank Clemente, executive director of Americans for Tax Fairness. “We are in danger of losing tens of billions of dollars in taxes owed to the American people by just two companies. Others will surely follow. The time for action to stop this tax dodge is long overdue – by the Obama Administration and by Congress.”

Johnson Controls had $8.1 billion in untaxed profits, labeled as “Permanently Reinvested Earnings,” parked offshore as of September 2015, according to the company’s Securities and Exchange Commission 10-K filings. It has paid no U.S. income taxes on those profits. Johnson Controls can determine whether, when and how much of those foreign earnings might actually be repatriated and therefore be taxed.

However, by merging with Tyco, a smaller company that resides in Ireland, a tax haven, and which used to be American and is itself a product of an inversion, the combined firm should be able to get its hands on Johnson Control’s $8.1 billion of untaxed offshore earnings and distribute those earnings as a big payday for shareholders and corporate executives. Based on the company’s SEC filings it is not possible to determine precisely how much U.S. tax it could avoid paying by employing this loophole because (contrary to the general SEC rule) the company has not disclosed the U.S. repatriation tax cost associated with this $8.1 billion of offshore earnings, on the theory that it is “not practicable” to do so. Even if there are some foreign tax credits, the U.S. tax break is likely to be substantial.

Johnson Controls will be exploiting the same loophole that Pfizer appears to be using with its “non-inversion inversion” with Allergan, also an Irish company. Pfizer has untaxed offshore profits of about $140 billion, according to an Americans for Tax Fairness report, which was subsequently confirmed by Pfizer to The New York Times. It likely owes tens of billions of dollars on those profits.

A Notice issued by the Treasury Department in September 2014 required taxes to be paid on those untaxed offshore profits following a technical inversion transaction if the foreign affiliate of an inverted U.S. corporation provided a so-called “hopscotch” loan (so called because the loan “hops” over the U.S. parent and is made directly to the new foreign parent) in order to give the new merged company tax-free access to the U.S. firm’s untaxed offshore profits. To fall within the technical definition of an inversion, the U.S. company’s original shareholders – in these cases the shareholders of Johnson Controls and Pfizer – must own 60% or more of the newly merged companies’ shares.

When a foreign corporation takes over the U.S. parent in a technical inversion transaction, the 2014 Notice treats loans from the foreign subsidiaries of the U.S. parent (where the earnings reside) to the new top-tier foreign acquirer as if they were loans to the U.S. parent, which in turn lends those funds to the ultimate top-tier foreign acquirer. Section 956 of the Internal Revenue Code imposes tax on loans by foreign subsidiaries to their U.S. parent corporation; the Treasury Notice thus triggers the application of section 956 to post-inversion hopscotch loans, thereby protecting the U.S. tax base from evasion, just as Congress intended when it enacted section 956. Conversely, if the 60% threshold is not met, the transaction is not a technical inversion, the Treasury Notice does not apply, and the implication is that the U.S. company can lend those offshore earnings to the new foreign merged company tax-free.

In other words, dodging taxes on these offshore profits requires a “non-inversion inversion” for these merging companies to avoid the scope of the Treasury’s 2014 anti-inversion guidance. This means that former shareholders of the original U.S. corporations must end up owning less than 60% of the newly combined companies. Johnson Controls’ shareholders will own 56% of the new company, according to The Wall Street Journal. Similarly, Pfizer structured its inversion so that its original shareholders will comprise 56% of the newly merged company.

In its 2014 Notice the Treasury Department relied on the full scope of its regulatory authority to issue needful rules to carry out the purpose of the tax code. The Treasury Department can close this continuing loophole by applying the principles of the 2014 Notice to “hopscotch” loans regardless of whether the foreign parent is 60% owned by former U.S. shareholders. The economic and tax policy reasons underlying the Notice’s re-characterization of “hopscotch” loans in a technical inversion transaction apply with equal vigor to any situation in which a foreign subsidiary bypasses its U.S. parent to lend money to the new foreign parent, regardless of the percentage of continuing ownership held by former shareholders of the U.S. company. At a minimum, these principles should apply to all hopscotch loans where the U.S. firm is the larger of the two merging companies, because in these cases the form of the transaction – as an acquisition by the smaller foreign firm of the larger U.S. company – is the opposite of the combination’s economic substance.

Treasury made a mistake in restricting the 2014 Notice to technical inversions, since these are defined as requiring over 60% of new foreign parent’s shareholders to be former shareholders of the U.S. parent. That limitation will enable Pfizer/Allergan and Johnson Controls/Tyco International to avoid the Notice. If Treasury were to expand the 2014 Notice to all hopscotch loans to include situations where the former U.S. shareholders own less than 60% of the new foreign parent, the tax benefit from these transactions would be significantly reduced.

Americans for Tax Fairness is a diverse coalition of 425 national and state endorsing organizationsthatcollectively represent tens of millions of members. The organization was formed on the belief that the country needs comprehensive, progressive tax reform that results in greater revenue to meet our growing needs. ATF is playing a central role in Washington and in the states on federal tax-reform issues.