Collective Fortune of 10 Richest Americans More Than Doubled Since Start of the Pandemic in March 2020, to $1.35 Trillion; With Every Passing Second, $12,600 Wealthier

As the World Economic Forum, criticized “as an elitist gathering of the super-rich,” met virtually this week, the wealth of America’s 10 richest billionaires reached $1.35 trillion, more than doubling since the beginning of the pandemic. Their $731 billion increase in wealth means they have added a billion dollars to their collective fortune every day between the beginning of the pandemic on March 18, 2020, and January 18, 2022, according to a new report from Americans for Tax Fairness analyzing Forbes data. That leap in riches equals roughly $12,600 a second, or an average of $1,260 per second per billionaire. [See tables below and here.]

Over that same 22-month period:

“The pandemic has been very good to American billionaires, especially the top 10. Their obscene rise in wealth—all of it potentially untaxed—stands in stark contrast to the lot of America’s working families, who’ve struggled through almost two years of a health crisis and economic uncertainty including most recently, rising prices,” said Frank Clemente, executive director for Americans for Tax Fairness. “Chairman Wyden’s Billionaires Income Tax would better align the fortunes of America’s richest of the rich with the needs of average Americans. The revenue from the BIT could free the President’s Build Back Better agenda now stuck in the U.S. Senate over cost concerns.”

Under current law, much of the huge pandemic rise in billionaire wealth may never be taxed. That would change if Congress included the Billionaires Income Tax proposed by Senate Finance Committee chairman Ron Wyden in the Build Back Better legislation now before the U.S. Senate. The Billionaires Income Tax would close the loophole that allows billionaire wealth gains to go tax-free by taxing the annual increase in value of billionaire assets, such as corporate stock. Now such gains are only taxed if the underlying assets are sold. If billionaires instead hold onto their assets until death—something they can do by living off cheap loans—those lifetime gains are never taxed.

The Billionaires Income Tax would raise $550 billion over 10 years, according to the Joint Committee on Taxation. That tax revenue from roughly 700 of the richest Americans would more than pay for an extra year of the expanded Child Tax Credit and Earned Income Tax Credit that have been helping working families deal with an uncertain economy and higher costs but have now run dry.

The incomprehensible fortunes of the nation’s billionaires increasingly isolates them from their fellow Americans. The richest 156 U.S. billionaires now hold the same amount of wealth—$3.4 trillion, according to Forbes data—as the entire bottom half of American households, per Federal Reserve data. 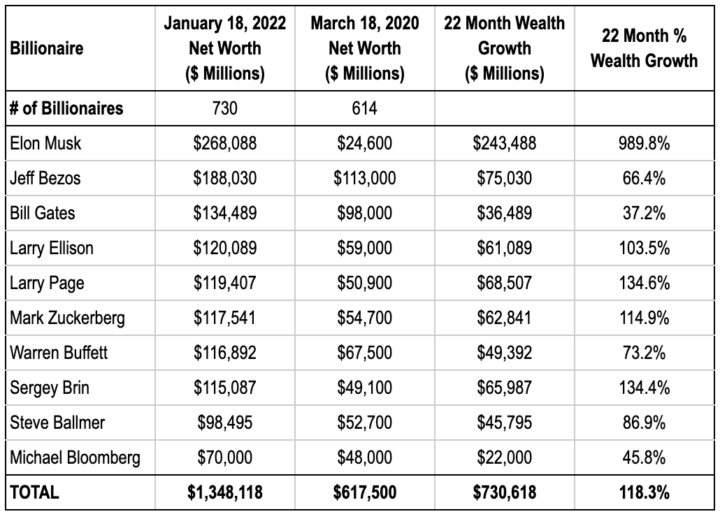 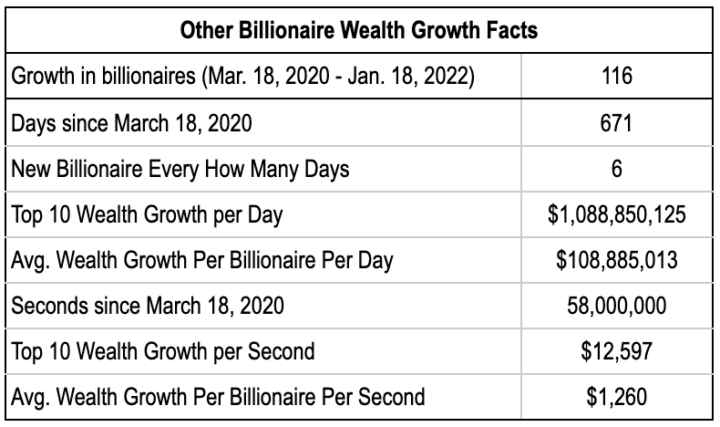 Go here for more on sources.