President Trump’s proposed 2020 budget rubs salt in the wounds caused by the GOP’s 2017 tax law. Not only does it propose that working families pick up the tab for the tax law’s giveaways slanted towards the wealthy and big corporations through funding cuts to Medicare, Medicaid, Social Security disability benefits and other vital public services, but it actually proposes even more tax cuts mostly enriching the already rich.

We urge you to publish an opinion piece explaining to readers how the Administration’s tightly linked and equally misguided tax and budget policies help President Trump, the wealthy and corporations while hurting the rest of America.

After ramming through his 2017 tax cuts that will cost nearly $2 trillion over 10 years and mainly benefit the wealthy and big corporations, President Trump now wants working families to help cover the cost with huge cuts to healthcare, education, housing and more. Trump’s 2020 budget also proposes another $1.1 trillion in tax cuts mostly benefiting the wealthy, paid for by slashing more services for working families. And by repealing the Affordable Care Act, Trump’s budget provides a hidden $235 billion tax cut for the healthcare industry, including insurers and drug companies, major beneficiaries of the 2017 corporate tax cuts.

The chart below compares some of the many cuts to key services proposed in Trump’s 2020 budget with 2017 tax cuts of roughly equal size that exclusively or primarily benefit the wealthy and corporations. Presented this way, the inevitable tradeoffs between tax and budget policy become clear. 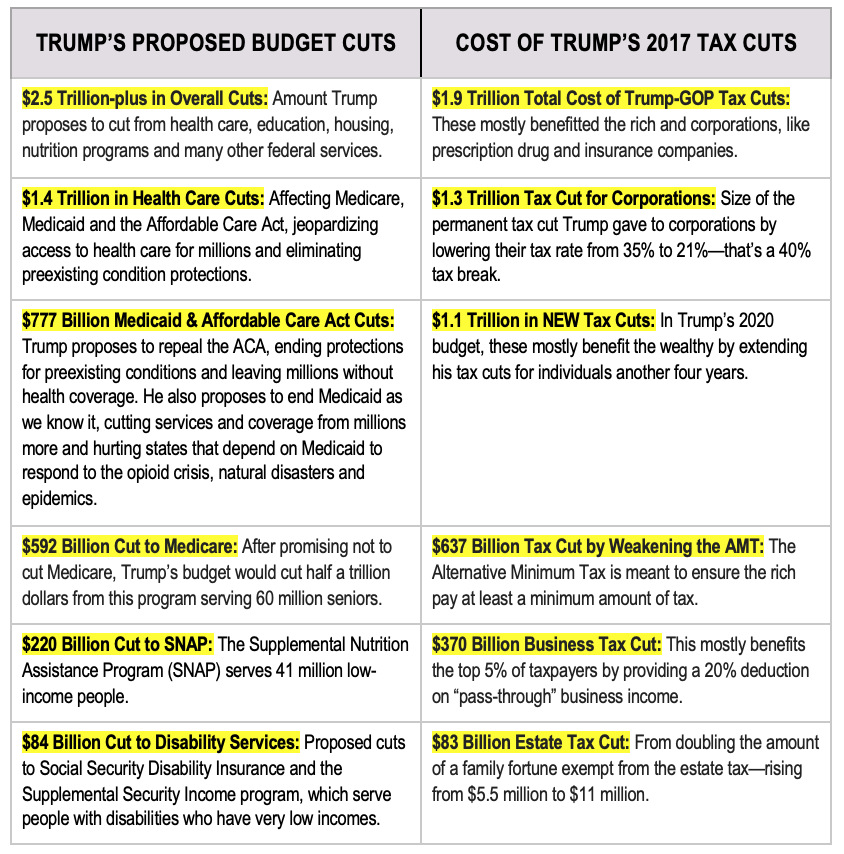 Tax cut costs are from Joint Committee on Taxation (Dec. 18, 2017) at https://www.jct.gov/publications.html?func=startdown&id=5053

Sources: All dollar figures are over 10 years unless otherwise noted. Sources for budget cuts are at https://bit.ly/2UM1izV.

In addition to the funding cuts noted above, Trump’s budget includes: