President Donald Trump’s proposed $4.7 trillion 2020 budget – and his administration’s attack in court to repeal the Affordable Care Act (ACA) – would hand drug companies, health insurance firms and medical device manufacturers a $235 billion tax cut while millions of Americans would lose health care coverage. The tax cut would be on top of the billions in tax cuts drug companies received as a result of the 2017 Tax Cuts and Jobs Act.

As part of the bargain to get the ACA passed in 2010, key healthcare industries agreed to pay taxes on their revenues to help finance expanded healthcare coverage since they benefited enormously from newly insured customers.

Three industries – health insurers, drug companies and medical device makers – would save a total of $235 billion over the next 10 years if the ACA is repealed along with the three industries’ taxes, based on ATF’s analysis of Joint Committee on Taxation data from 2017. Health insurers would get a tax windfall of $183 billion and drug companies $27 billion. These industries were among the leading beneficiaries of the 2017 Trump-GOP tax cuts.

If the ACA is repealed, millions of people would lose coverage, and protections for 52 million to 130 million people with pre-existing conditions would be eliminated.

“This assault on the ACA threatens health care coverage for millions of Americans while further enriching drug companies and insurance companies with huge tax breaks,” said Frank Clemente, executive director of Americans for Tax Fairness. “It’s another clear sign of the values and priorities of this administration – more tax cuts for the wealthy and big corporations paid for by working families.” 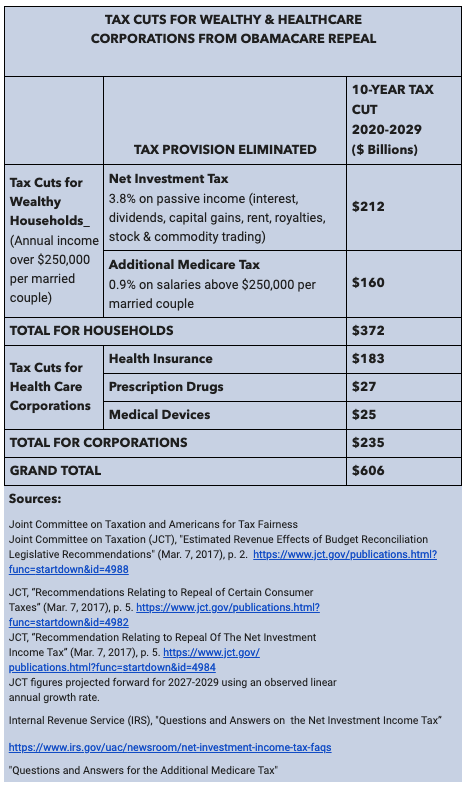