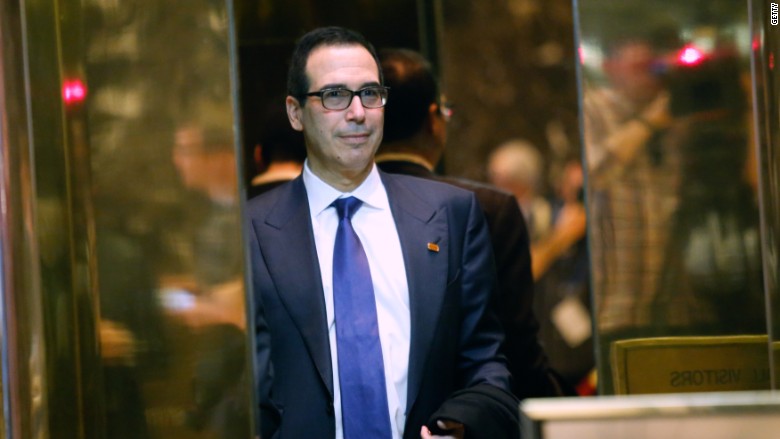 WASHINGTON, D.C.—Americans for Tax Fairness estimates that Steven T. Mnuchin, President-elect Donald Trump’s nominee for U.S. Treasury Secretary, could slash his personal tax bill by up to roughly $3.3 million a year should Trump’s tax plan become law. He would save similar amounts if House Speaker Paul Ryan’s tax plan were enacted. Repeal of the Affordable Care Act (ACA) alone could cut Mnuchin’s taxes by up to about $500,000 a year by eliminating two Medicare taxes on high-income filers.

These estimates are based on the income and assets revealed in Mnuchin’s recent financial disclosure statement filed with the U.S. Office of Government Ethics. ATF’s analysis of Mnuchin’s income between 2015 and 2016, and his financial assets and their current value, is available here.

“Steven Mnuchin’ has stated that under Trump’s tax plan ‘[t]here will be no absolute tax cut for the upper class,’” said Frank Clemente, executive director of Americans for Tax Fairness. “But that’s at complete odds with the tax plans proposed by candidate Trump and House Speaker Paul Ryan. At his confirmation hearing, Mnuchin should be grilled about how as Treasury Secretary he would fix those plans so that they meet his test. Given how much Mnuchin stands to personally gain from these tax plans, the public may view Mnuchin’s confirmation as Treasury Secretary as akin to having the bank robber guard the bank.”

Clemente continued: “The enormous tax breaks that will be given to Mnuchin and other wealthy Americans by repealing the ACA and enacting the Trump tax plan are a betrayal of working families. Mnuchin and his friends on Wall Street get a huge tax cut, but millions of families lose their health care. Mnuchin needs to answer the question: ‘What will you do as Treasury Secretary to keep your pledge to working families that there ‘will be no absolute tax cut for the upper class?’”

[i] The calculations are based on Tax Policy Center estimates of how much the average taxpayer in the top 0.1% would save under the GOP plans. Mnuchin’s income and therefore estimated tax savings are expressed in ranges because the financial disclosure form allows for data to be reported in such bands. However, over 80% of the lower estimate is based on almost $42 million of precisely identified income figures. Moreover, the estimates are conservative in that the size of the tax cuts in TPC’s estimates rise with incomes, and Mnuchin’s income exceeds the average income of the top 0.1 percent.