U.S. BILLIONAIRES WEALTH SURGED BY 70%, OR $2.1 TRILLION, DURING PANDEMIC; THEY ARE NOW WORTH A COMBINED $5 TRILLION

America’s billionaires have grown $2.1 trillion richer during the pandemic, their collective fortune skyrocketing by 70%—from just short of $3 trillion at the start of the COVID crisis on March 18, 2020, to over $5 trillion on October 15 of this year, according to Forbes data analyzed by Americans for Tax Fairness (ATF) and the Institute for Policy Studies Program on Inequality (IPS). [A table of the top 15 billionaires is below and the full data set is here.]

Not only did the wealth of U.S. billionaires grow, but so did their numbers: in March of last year, there were 614 with 10-figure bank accounts; this October, there are 745.

The great good fortune of these billionaires over the past 19 months is all the more stark when contrasted with the devastating impact of coronavirus on working people. Almost 89 million Americans have lost jobs, over 44.9 million have been sickened by the virus, and over 724,000 have died from it.

To put this extraordinary wealth growth in perspective, the $2.1 trillion gain over 19 months by U.S. billionaires is equal to:

Sixty-seven national organizations have sent a letter to Congress expressing concern that neither the Ways and Means committee plan nor President Biden’s plan will adequately tax billionaires. They  recommend Billionaires Income Tax (BIT) legislation under development by Sen. Ron Wyden, chairman of the Finance Committee, be included in final BBB legislation. It is also supported by President Biden.

Most of these huge billionaires’ gains will go untaxed under current rules and will disappear entirely for tax purposes when they’re passed onto the next generation. Under Wyden’s BIT, billionaires will start paying taxes on their increased wealth each year just like workers pay taxes on their paychecks each year.

Public support for the BIT is very strong. When proposed as a way to pay for President Biden’s $3.5 trillion investment package it increases support 20 to 40 points among voters in battleground districts and states.

“This growth of billionaire wealth is unfathomable, immoral, and indefensible in good times let alone during a pandemic when so many have struggled with unemployment, illness and death,” said Frank Clemente, executive director of Americans for Tax Fairness. “For practical and moral reasons, Congress must start effectively taxing the outsized gains of billionaires. Many of the proposals under discussion to tax the rich would exempt billionaires because of the way they make their money. The Billionaires Income Tax, on the other hand, squarely focuses on the main source of billionaire income: the growth in their investments.”

“Billionaires are undertaxed and playing hide-and-seek with their substantial wealth,” said Chuck Collins, of the Institute for Policy Studies, author of The Wealth Hoarders. “Targeted tax increases on billionaires, including the proposed Billionaire Income Tax, would rebalance the tax code and reduce these glaring abuses in who pays for the services we all depend on.” 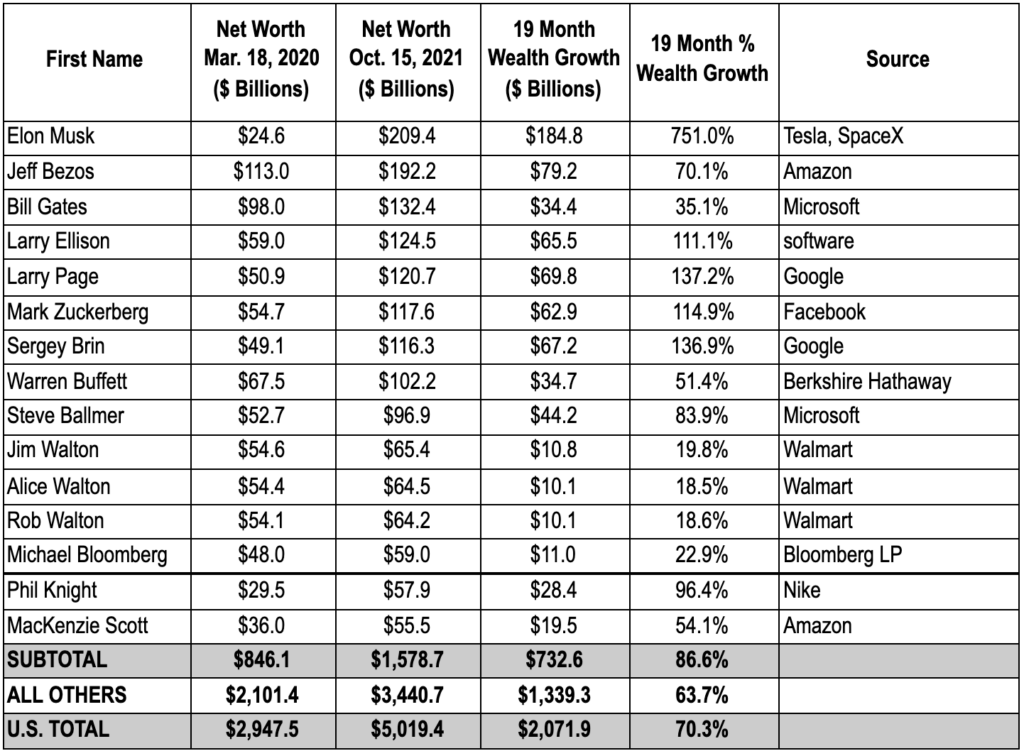 Among the individual stories behind the big numbers:

America’s billionaire bonanza demonstrates the structural flaws in our current economic and tax systems President Biden and Democrats in Congress are trying to remedy by advancing a $3.5 trillion package of investments in working families and communities, paid for with fairer taxes on the rich and corporations.

On average, billionaires pay an effective federal income tax rate of about 8% when the increased value of their stock is counted, according to the White House. This is a lower rate than many middle-income taxpayers pay like teachers, nurses and firefighters.

According to ProPublica’s analysis of IRS data:

Poll after poll shows that Americans of all political persuasions and by large majorities believe that the wealthy and big corporations need to start paying their fair share of taxes. A June poll by ALG Research and Hart Research shows 62% of voters support Biden’s proposed $4 trillion (at the time) investments in healthcare, childcare, education, clean energy and more—paid for by higher taxes on the rich and corporations.