The surcharge is the only tax increase in the House-passed bill that would specifically tax the ultrarich, which is a priority for voters in poll after poll. In a recent CBS News poll, taxing the wealthy was the second most important issue respondents wanted Democratic candidates to focus on after inflation: 61% vs. 83%.

It would be remarkable and very unfortunate if Congress were to pass significant tax-reform legislation and not specifically increase tax rates on billionaires and multi-millionaires. This ultra-wealthy group was the chief beneficiary of the Trump-GOP tax cuts enacted in 2017, and they have experienced extreme wealth growth in recent years, including during the past two years of the pandemic when working families struggled to get by.

In fact, during the first two years of the pandemic, from March 2020 to April 2022, the wealth of the nation’s 740 billionaires rose a staggering 70%, or by $2 trillion, based on ATF’s analysis of Forbes data. According to the Federal Reserve, the top 1% of households saw their collective wealth increase by $12 trillion (35.5%) since the pandemic began. That is $2.6 trillion more than the bottom 90% of households gained during the same period.

CONGRESS SHOULD RESIST EFFORTS TO WEAKEN THE SURCHARGE

Congress should resist reported efforts to exempt certain kinds of income mostly received by some of the highest-income Americans. This is especially true since tax data recently released by ProPublica and analyzed by Americans for Tax Fairness (ATF) shows how little many of them are paying now on their reported income and how much the surcharge would raise—over $8 billion a year—from just the nation’s 400 taxpayers with the highest incomes.

As the table below and this spreadsheet show, between 2013 and 2018 the 400 highest-income Americans (as opposed to the wealthiest) collectively earned on average about $107 billion a year and paid about $24 billion a year in taxes. That’s an effective tax rate of 22.4%, far below the top statutory rate of 39.6% in place most of that time (in 2018 the top rate was 37%). 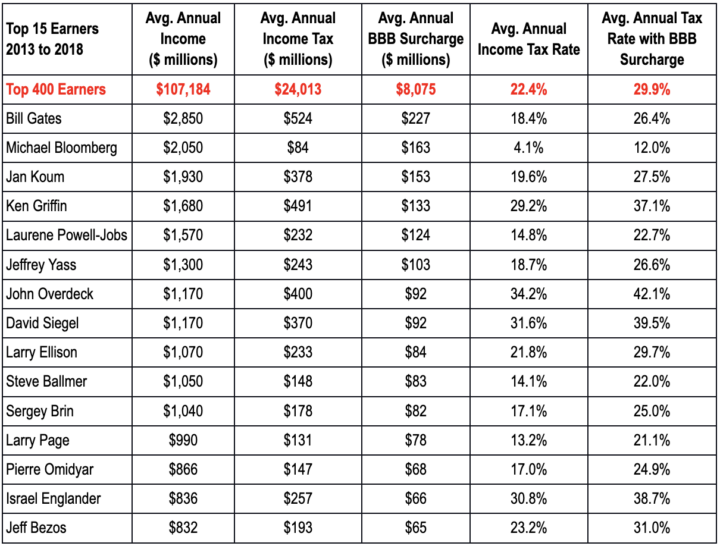 Comparison to the income and taxes of everyday Americans during that same period is startling. The average median income was around $62,000 from 2013-2018, and the average taxpayer paid a federal rate of 13.3% in 2019. The average annual income of the 400 highest-income taxpayers was about $107.2 billion between 2013-18, or $268 million per person on the list.  That means those at the pinnacle of the income pyramid had about 4,300 times more coming in but paid a tax rate not even two times that of the average American.

Some of America’s richest billionaires paid much less than the 22.4% rate, or nothing at all:

While the House-passed high-income surcharge would not entirely solve the problem of tax-free billionaires and multimillionaires (that requires a more fundamental reform like a billionaires income tax), it would reduce the scale of tax avoidance by the very rich. For instance, ATF estimates the surcharge would have raised the tax rate paid by those 400 highest-income Americans by one-third, from 22.4% to 29.9%.

The $228 billion in revenue from the surcharge would be enough to fund many of the House-passed BBBA initiatives to lower costs paid by working families for vital household expenses. Public investments funded by the millionaires surcharge could reduce homecare costs paid by families for elderly and disabled family members ($209 billion); or guarantee family and medical leave for all workers ($205 billion); or offer free preschool for all 3 and 4-year-olds ($214 billion); and lower rent and mortgage costs by increasing public and private housing supplies ($151 billion).

If the surcharge is to be changed at all, it should be strengthened—such as by replacing it with the Millionaires Surtax introduced in Congress in 2021 by Sen. Chris Van Hollen (D-MD) and Rep. Don Beyer (D-VA). By lowering the threshold over which the tax is due to $2 million per couple ($1 million per individual), the Millionaires Surtax would raise $635 billion over 10 years. ATF estimates that this proposal would raise at least $10.6 billion a year from just the nation’s 400 highest income households, elevating their average tax rate to 32.2%.

EFFORTS TO WATER DOWN THE HIGH-INCOME SURCHARGE

Efforts have been reported to exclude at least one type of income from the high-income surcharge: profits from pass-through businesses. There are also rumors that so-called “carried interest” and capital gains income could also be exempted from the tax.

Though almost all American businesses—from corner grocers to Wall Street law firms—are “pass-through” entities (sole proprietorships, partnerships or S-corporations), the income from these businesses is highly concentrated. (They are called “pass-throughs” because profits and losses pass through to the owners who pay any tax due on their personal tax returns at individual rates.) Over half of all pass-through income goes to the top 1% of taxpayers.

“Carried interest” is a form of compensation earned by wealthy money managers who are allowed to mislabel it as investment income in order to pay a lower tax rate. Industry resistance has kept this loophole open despite consensus across the political spectrum to close it.

Capital gains are the profit from selling an asset for more than its purchase price. Gains from the sale of assets held over a year are taxed at a special low rate—just a base rate of 20%, compared to 37% on the same amount of income from wages or many other sources.  And this low-taxed form of income is highly concentrated among the wealthy: over three-quarters goes to the highest-income 1%, over half to the highest-income 0.1%.

Excluding from the high-income surcharge these three types of income—all of which already benefit from privileged tax treatment—would afford them a double (and completely unjustified) privilege. In fact, since all of these types of income flow overwhelmingly towards the richest taxpayers, exempting them from the surcharge would defeat its very purpose.

Among the tax increases in the BBBA, the high-income surcharge is the most direct and easy-to-explain effort to ensure the wealthy pay a fairer share of taxes. Polls consistently show Americans of all political stripes want the rich and corporations to pay more in taxes. It’s therefore politically as well as financially smart to include in the Democrats revised economic plan the high-income surcharge—unadulterated by special exemptions—at least as robust as the version passed last year by the House of Representatives.