VOTE ON $3 TRILLION IN NEW TAX CUTS PLANNED IN U.S. HOUSE NEXT WEEK

WASHINGTON, D.C. – House Speaker Paul Ryan is expected to bring legislation to the House floor next week that would provide a second round of tax cuts which, like the first round last year, heavily favors the wealthy and businesses, will add $3 trillion to the national debt and lead to Republicans calling for deeper cuts in services such as Medicare, Medicaid, Social Security and education.

The legislation under consideration would permanently extend the 2017 tax law’s provisions affecting individuals and pass-through businesses – sole proprietorships, partnerships and S corporations – that are slated to expire after 2025. (These are summarized at the end of this memo.)

We urge you to consider the documented facts below regarding the effects of the tax cuts and write an article or opinion column informing your viewers or readers of the overwhelming evidence and findings that the tax cuts will, like the first round, largely benefit the wealthy and corporations, balloon the deficit, and lead to GOP demands for steep reductions in spending on health care and many other services.

Americans for Tax Fairness has prepared state reports available here showing how much the richest 1% will benefit from the new tax cuts and the kinds of services that could instead be provided with that revenue. 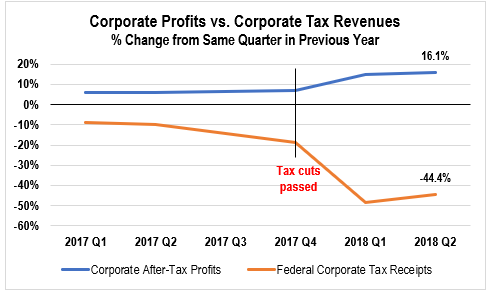 Source: Corporate profits and corporate taxes from Bureau of Economic Analysis,
retrieved from FRED, as of August 20, 2018

The second round of tax cuts would make permanent individual provisions of the Trump-GOP tax law that expire in 2025:

WHAT OTHERS ARE SAYING

The Washington Post (Editorial): The House GOP stages a political show on taxes, 9/15/2018

Committee for a Responsible Federal Budget, Further Tax Cuts are the Height of Fiscal Irresponsibility, 9/11/2018

Institute on Taxation and Economic Policy: Latest GOP Tax Package Is Also Skewed to the Rich, 9/10/2018

Center for American Progress: Congress Should Not Give a Second Helping of Tax Cuts to the Rich, 6/14/2018