VOX: WHAT AMERICANS REALLY THINK ABOUT BILLIONAIRES DURING THE PANDEMIC

Read the full Vox story below or at this link.

A new poll from Vox and Data for Progress pulls back the curtain.
by Theodore Schleifer

But what do regular people think?

A new, exclusive poll from Vox and Data for Progress pulls back the curtain on how Americans feel about the exploding net worth of billionaires during the Covid-19 pandemic, their record-setting philanthropy as a way to address inequality, and whether they have too much political power in the country’s elections. The poll was fielded in February and surveyed likely voters.

The data suggests that gone are the days when the ultra-wealthy could count on widespread admiration as job creators, titans of industry, and thought leaders. Now they confront a skeptical public, shaped in part by a year of the pandemic that has entrenched their power.

At the same time, Americans reject many of the farthest-left critiques of billionaires and their influence on American life. You can read the full results here, and these are some of the highlights.

How Americans feel about billionaires during the pandemic

The pandemic has exacerbated wealth inequality, and many Americans are resentful of the fact that while they struggled, the wealthy made significant gains. 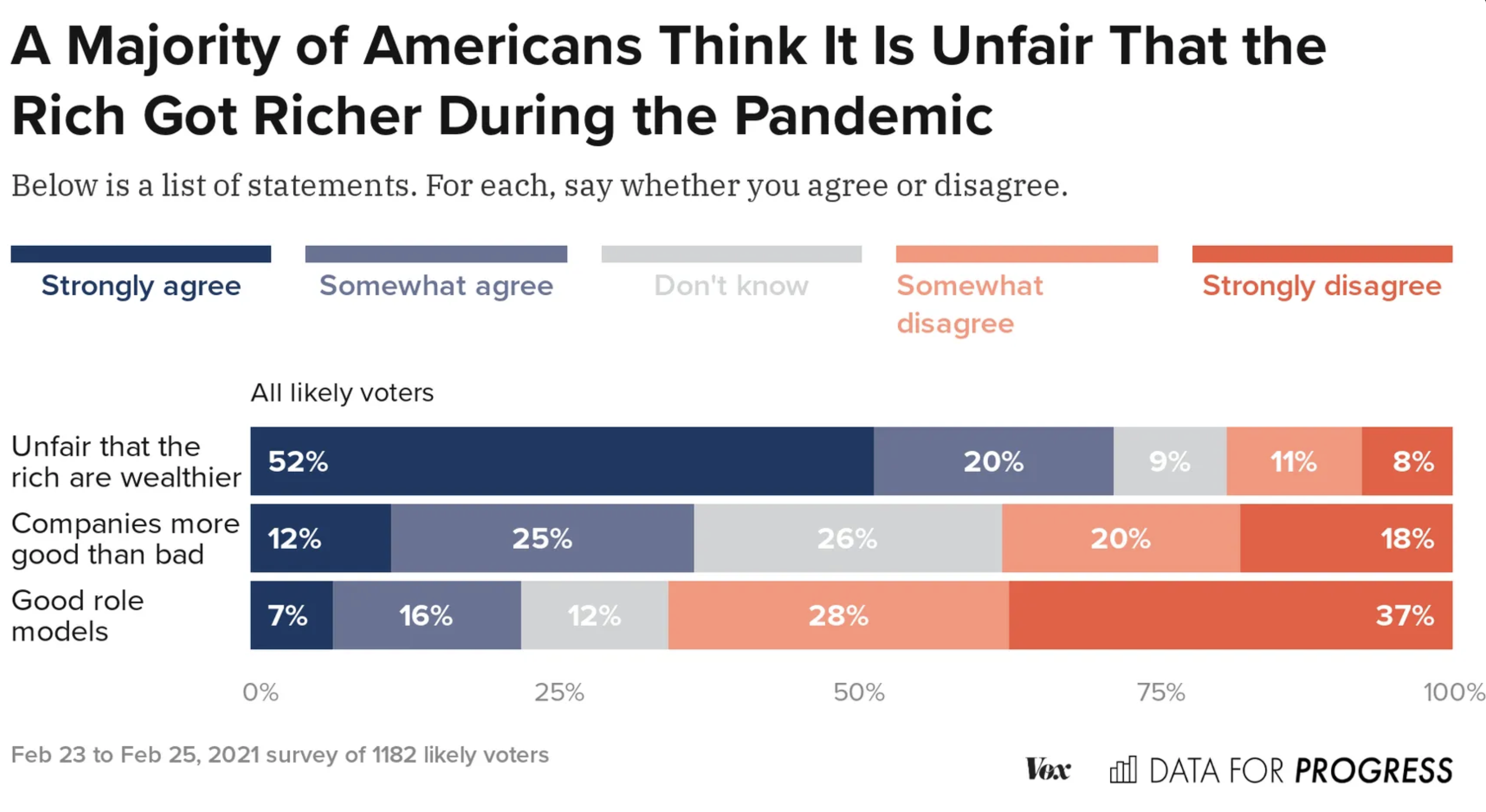 By a wide gap — 72 percent to 19 percent — voters polled say it was unfair that billionaires got wealthier during the pandemic. That conclusion is shared across all racial, partisan, socioeconomic, and other demographic groups.

This unease is reflected in questions that speak to Americans’ more generalized opinions about the top 1 percent, which were generally shared across the political spectrum. Only 23 percent of those polled said they consider billionaires to be good role models for the country, while 65 percent said they don’t. 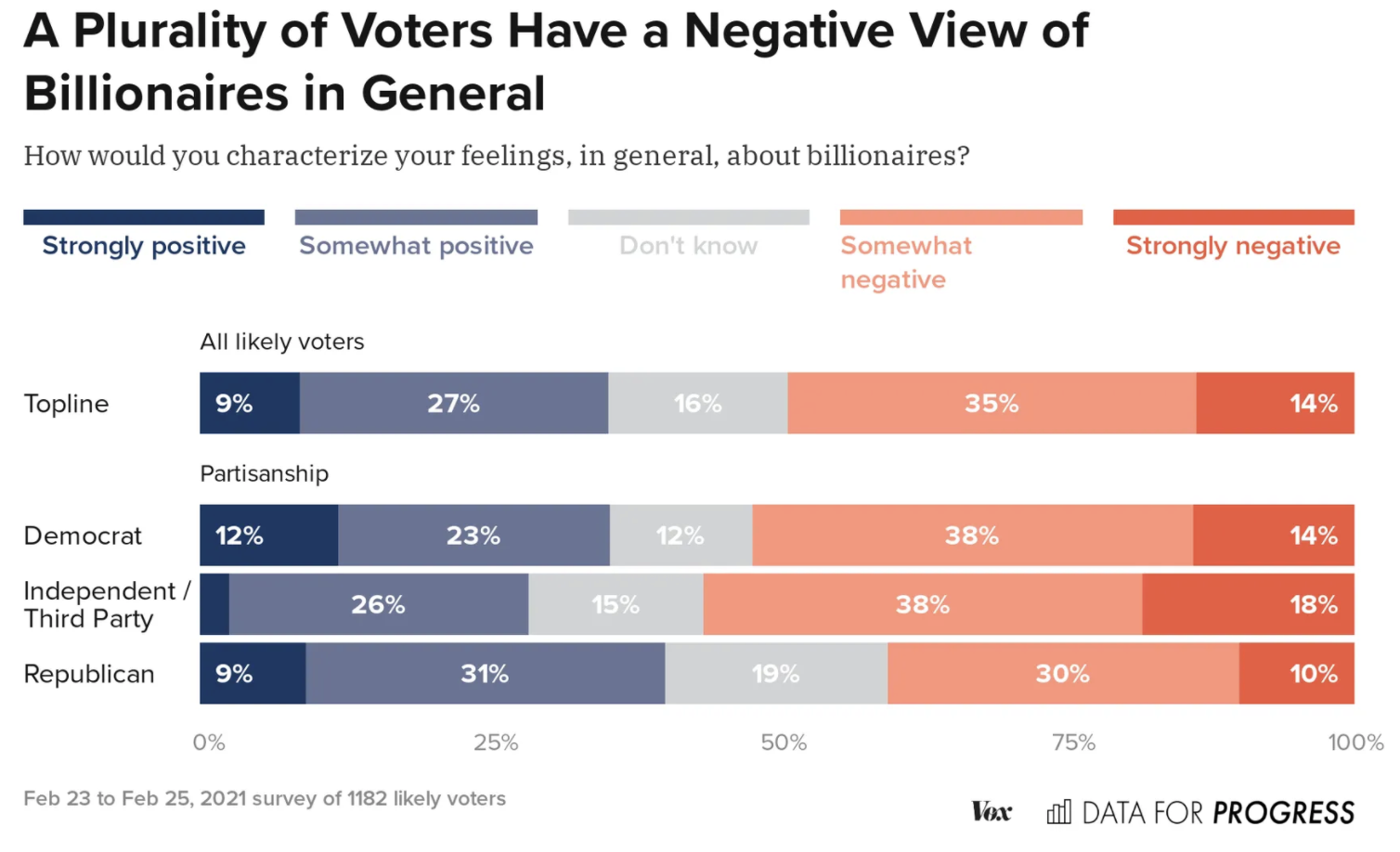 How Americans feel about billionaire philanthropy 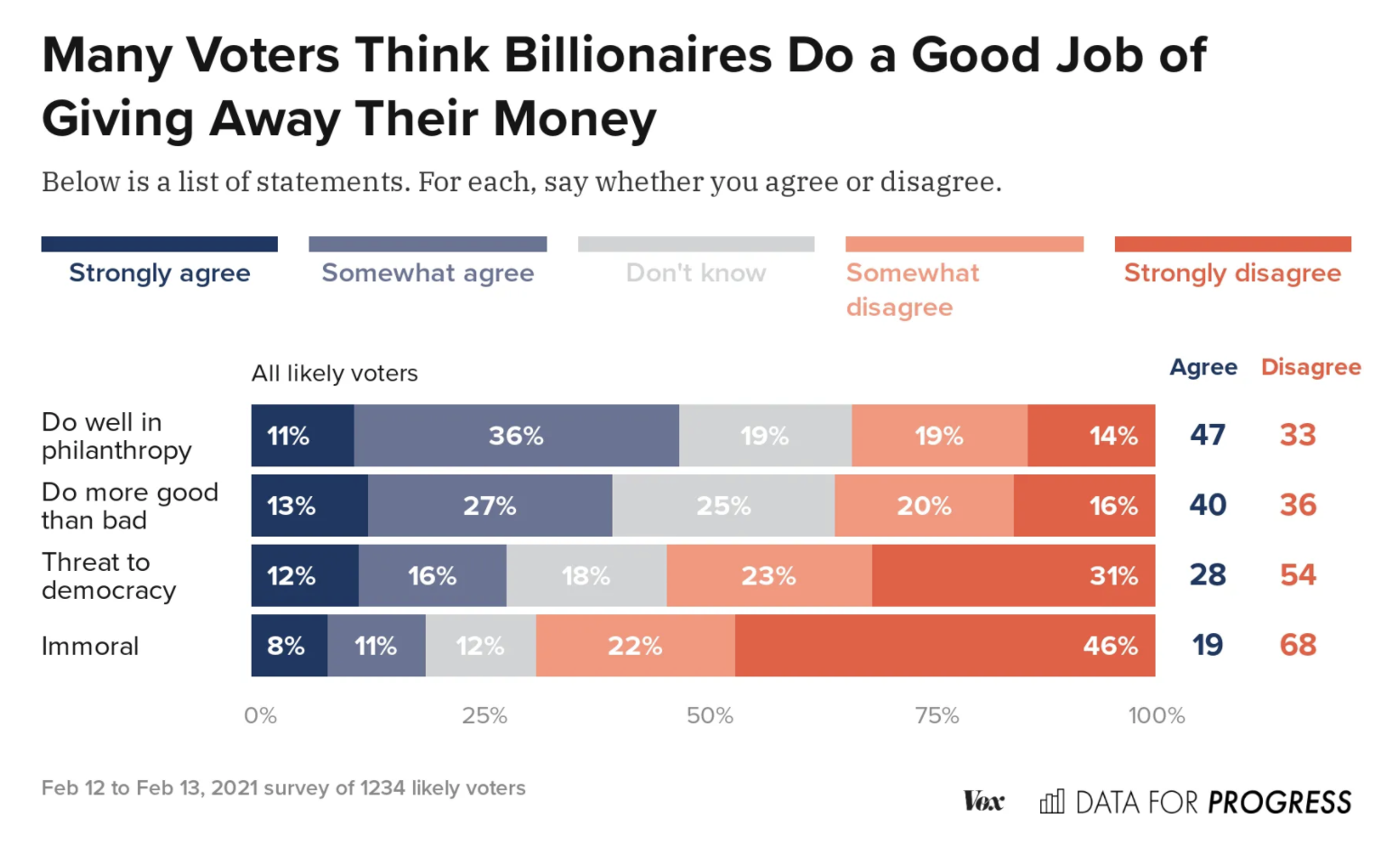 However, they do not think philanthropy is a sufficient solution to solve Americans’ inequality problems. When asked which is a better fix for the country’s problems during the pandemic — raise taxes or seek more charity from the wealthy — 52 percent chose the former and 38 percent indicated the latter.

Four tech billionaires have become some of the world’s most influential people during the pandemic, at center stage in America like never before. Vox asked voters how they felt about these increasingly unavoidable figures. 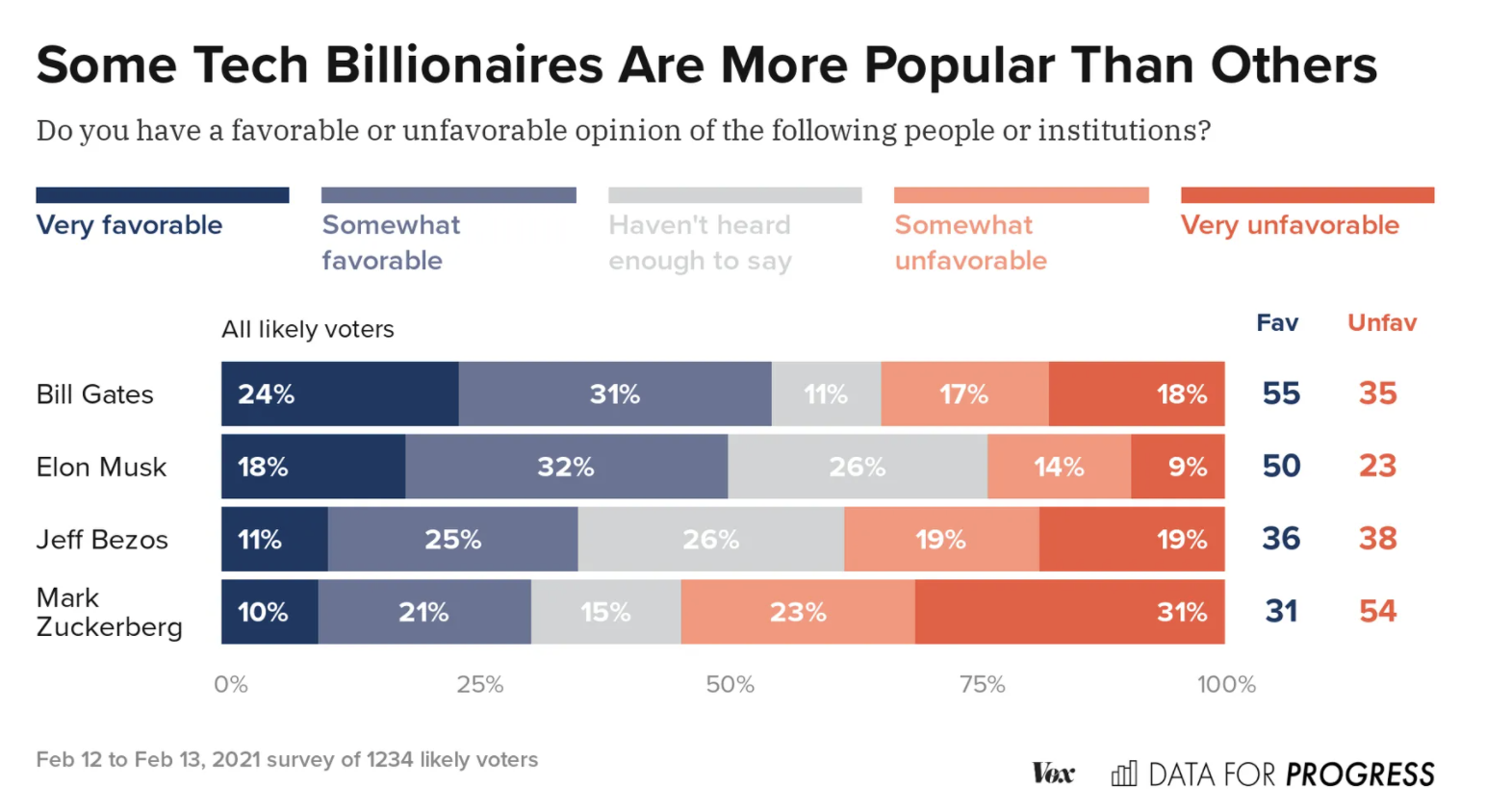 Bill Gates, who has played a quasi-governmental role during the pandemic from his perch and his eponymous foundation, is also viewed very favorably in the throes of the crisis — 55 percent of respondents said they felt this way versus 35 percent who felt differently. Gates is especially popular with Democrats, who are fans by a 55-percentage point margin.

Jeff Bezos and Mark Zuckerberg, both lightning rods in their own ways, are less popular figures. Just about as many people view Bezos unfavorably as view him favorably. And Zuckerberg himself is under water by a significant margin; 54 percent say they have an unfavorable opinion, including 64 percent of Republicans.

Whether Joe Biden himself was too close to this billionaire class, predictably, depends on partisanship. Only 20 percent of Democrats say that’s the case while 72 percent of Republicans say so.