How Walmart is Dodging Billions in Taxes: And Scheming to Avoid Billions More 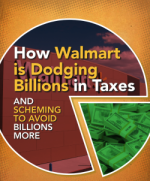 This new Americans for Tax Fairness report exposes how Walmart uses tax breaks to dodge a whopping $1 billion in federal taxes each year, on average. It also shows how Walmart is working behind the scenes to help lower the U.S. corporate tax rate to 25%, which would allow Walmart to cut its tax bill another $720 million a year, on average.

The report, How Walmart is Dodging Billions in Taxes: And Scheming to Avoid Billions More also reveals that the company currently holds $21.4 billion in profits offshore, where those earnings are exempt from federal taxes until they are brought back to the United States – which may never occur.

The study also reveals the ways in which Walmart is working to reduce corporate tax rates and eliminate all taxation of foreign profits, known as a territorial tax system. Walmart lobbies heavily on Capitol Hill to gain influence over the legislative process, employing 74 lobbyists and spending $32.6 million lobbying (tax issues being its top lobbying priority) over the past five years.

Read the key findings and our infographic page plus images to share on social media.