THIS TAX DAY, AMERICA’S WORKING FAMILIES ARE PAYING THEIR FAIR SHARE BUT AMERICA’S BILLIONAIRES ARE NOT

A Similar Tax Proposed by Senate’s Chief Tax Writer Would Reap Up to $555 Billion to Lower Working-Family Costs for Healthcare, Childcare & Other Vital Services

On Tax Day, April 18, 2022, working families are once again paying their fair share and billionaires are not. American billionaires saw their collective net worth climb by $2 trillion, or 70%, during the first two years of the pandemic to a staggering $5 trillion, according to Forbes data analyzed by Americans for Tax Fairness (ATF). [See table below and all data here] But none of that wealth growth—the main source of billionaire income—may ever be taxed.

Billionaires and other very wealthy people overwhelmingly generate income not from a job or small business, but from the growth in the value of their investments. But that form of income is never taxed unless the investments are sold. Yet the very wealthy do not need to sell their assets to turn the increasing value of their wealth into cash income; instead, they use their swelling fortunes to secure special low-interest loans allowing them to live lavishly without paying income taxes. Moreover, a lifetime of such income growth from assets can be passed onto the next generation tax-free. 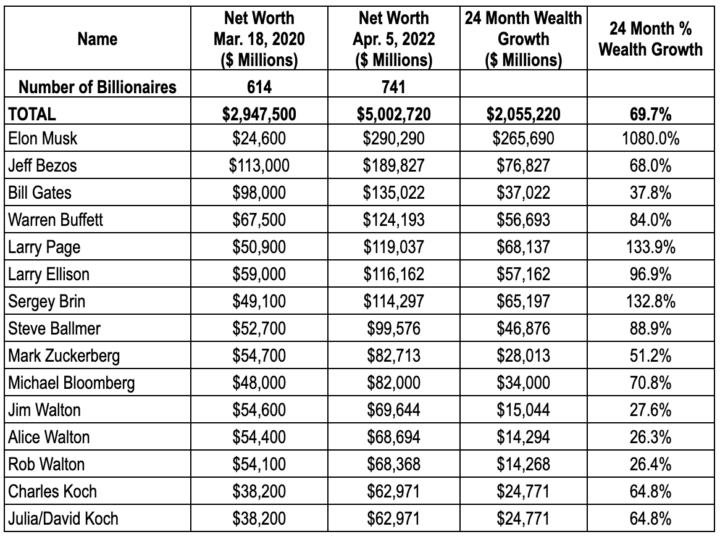 Congress can close this massive tax loophole through a billionaires income tax, such as recently proposed by President Joe Biden and last year by Sen. Ron Wyden (D-OR), the Senate’s chief tax writer. A comparison of the two proposals is available here.

Both proposals would tax investment gains of the superrich more like the wages of workers are taxed now. Requiring billionaires to pay a fairer share on the growth in value of their assets would make the tax system more equitable and generate revenue that would greatly benefit the economy and increase services and opportunities for millions of Americans.

“The failure to tax increases in billionaire wealth from skyrocketing corporate stock and other investments is the worst loophole in our loophole-ridden tax code. Workers pay tax on their income all year, every year. Simple justice demands that billionaires do the same,” said Frank Clemente, executive director of Americans for Tax Fairness. “Congress should close this loophole as part of the legislation members are now negotiating to help families cope with rising prices and make major investments in clean energy, all paid for by more fairly taxing the rich and corporations.”

Revenue raised from a billionaires income tax could help lower costs paid by America’s working families for necessities like healthcare, childcare, education and housing; and make other crucial public investments, such as in the effort to avert climate catastrophe. Based on cost estimates from the House-passed Build Back Better Act, these are among the investments and combinations of investments that could be funded by the President’s $360 billion plan:

The public overwhelmingly favors a billionaires income tax: 64% of respondents in a recent national poll supported Senator Wyden’s plan. (Biden’s plan was not tested in this poll.)

This billionaires’ bonanza has played out against the pandemic pall: 80 million Americans have contracted COVID-19 and nearly one million have died from it. Many small businesses have closed, daily life has been disrupted and the cost of everything from housing to gas has consumed a greater share of household incomes. Although prompt and ample federal action prevented much worse economic consequences from COVID and helped to speed recovery, businesses and families will once again face perils as many of these interventions expire shortly.

Millions of families, for instance, could face steep increases in healthcare premiums or loss of insurance coverage in the second half of this year as pandemic responses fall away:

Continuing affordable healthcare coverage for millions of America’s working families would cost about $50 billion a year. That cost could be covered by Sen. Wyden’s tax on just the nation’s 700 or so richest households.

“It’s time to get our priorities straight. No one in our country, no matter where they live or how much money they have, should lose healthcare because they can’t afford coverage while billionaires get richer and avoid paying any taxes toward supporting the economy,” said Margarida Jorge, Executive Director of Health Care for America Now.

Citizen activists are calling on their members of Congress  to take a position on increasing taxes for billionaires through the enactment of a billionaires income tax like those proposed by President Biden and Senator Wyden. As Congress prepares to debate a package that will include some tax increases for the wealthy, voters are asking members to endorse a resolution calling for billionaires to pay their fair share.

Proposals to create a billionaires income tax represent a historic change in direction away from decades of proliferating tax breaks and wider loopholes for the wealthy that have contributed to a growing wealth gap between the nation’s richest families and everyone else. President Trump’s 2017 Tax Cuts and Jobs Act (TJCA), the last major tax legislation passed by Congress, provided $1.9 trillion in tax giveaways mainly to the rich and corporations.