BILLIONAIRE WEALTH GREW BY $845 BILLION, or 29%, AS AMERICA STRUGGLED THROUGH FIRST SIX MONTHS OF PANDEMIC

Half a year into a paralyzing pandemic that has cost millions of Americans their livelihoods and lives, the nation’s 643 billionaires have racked up $845 billion in collective wealth gains, a 29% leap since March 18. America’s billionaires reached this startling milestone of wealth accumulation even as special federal relief was drying up for millions of unemployed workers and for hard-pressed state and local governments struggling to provide vital services. Billionaire figures are from Forbes analyzed in a new report by Americans for Tax Fairness (ATF) and the Institute for Policy Studies (IPS).

Between March 18—the rough start date of the pandemic shutdown, when most federal and state economic restrictions were in place—and Sept. 15, the total net worth of the nation’s billionaires rose from $2.95 trillion to $3.8 trillion (see table below and this spreadsheet of all billionaires). That works out to gains of $141 billion a month, $32 billion a week, or $4.7 billion a day. Forbes’ annual billionaires report was published March 18, 2020, and the real-time data was collected Sept. 15 from the Forbes website.

Needless to say, ordinary workers did not fare as well. From mid-March to mid-August, the collective work income of rank-and-file private-sector employees—all hours worked times the hourly wages of the entire bottom 82% of the workforce—declined by 4.4.%, according to Bureau of Labor Statistics data.

In fact, this billionaires’ bonanza occurred against a general backdrop of working-class pain:

The stock market in which billionaires have much of their money invested dropped sharply in the month before the pandemic lockdown. But the six months of gains that followed were not merely a reversal of those losses: billionaires are also $680 billion, or 22%, richer today than they were in February 2019, the release date of the most recent previous Forbes annual report (see table below).

“Every candidate in this campaign season, from presidential hopeful down, who’s pledging to lead us out of the coronavirus crisis must address this stark divergence between the nation’s wealthiest elite and their struggling fellow citizens,” said Frank Clemente, executive director of Americans for Tax Fairness. “The answer starts with creating a fair share tax system that narrows obscene wealth gaps and raises the trillions of dollars needed to address the present emergency and invest in our families and communities over the long-term.”

“The billionaire economy has been turbocharged by policymakers who are now stalling on relief for the real economy,” said Chuck Collins, director of the Institute for Policy Studies’ Program on Inequality and co-author of the report “Billionaire Bonanza 2020.” “The difference is stark between profits for billionaires and the widespread economic misery in our nation. Clearly, the priorities of our elected officials in Washington, DC are completely upside down.” 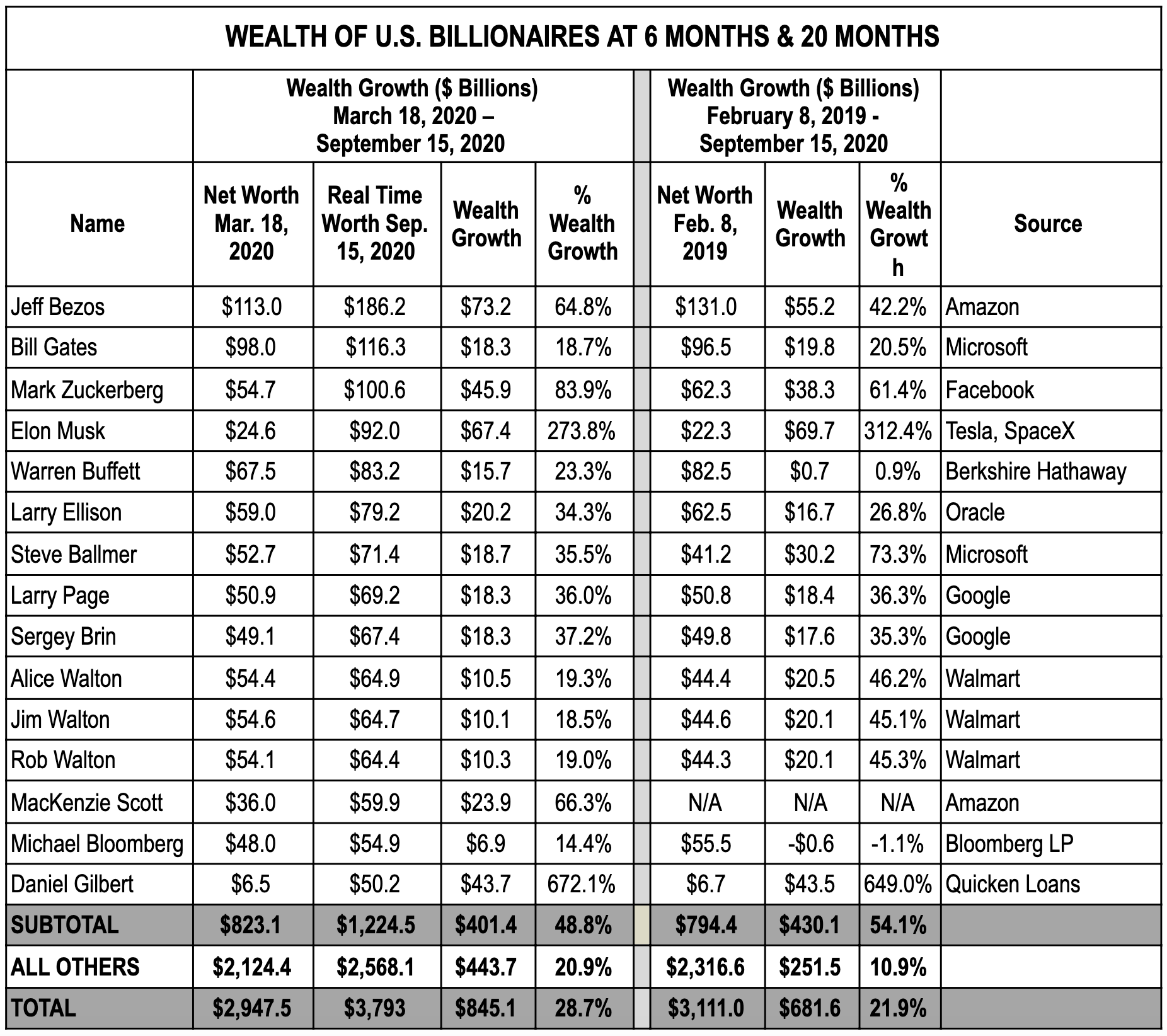 The data in the table above and for all billionaires is available here.

Even among billionaires, wealth is highly concentrated. Roughly $400 billion, or only a little less than half of the total gains, were captured by just the 15 wealthiest on the billionaires list. The top three gainers alone—Jeff Bezos, Mark Zuckerberg and Elon Musk—enjoyed fully 16% of the spoils, or a collective wealth surge of $137 billion. One billionaire from Michigan, Dan Gilbert of Quicken Loans, saw his wealth increase an astonishing 672%, growing from $6.5 billion to $50.2 billion.

The total wealth of all the billionaires—$3.8 trillion today—is two-and-a-half times the $1.5 trillion in total wealth held by the bottom half of the population, or 165 million Americans.

The $845 billion wealth gain by 643 billionaires over the past six months far exceeds the:

Low-wage workers, people of color and women have suffered disproportionately in the combined medical and economic crises because of long-standing racial and gender disparities. Billionaires are overwhelmingly white men.

House Democrats passed a relief bill back in May that offered a lifeline to Americans not sharing in the billionaires’ good fortune during the pandemic. Among its provisions:

All of the above data is available in one table here.

Sen. Bernie Sanders (I-VT) and Rep. Ilhan Omar (D-MN) have introduced legislation for a 60% tax on the pandemic wealth gains of billionaires between March 18 and the end of the year and use the proceeds to help working Americans cover healthcare costs.