664 Richest Americans Now Worth a Collective $4.2 Trillion, Up 44% Since COVID Shutdowns Began in March 2020

American billionaires continued their alternative experience of the coronavirus crisis as their total wealth shot past $4.2 trillion in February—up $1.3 trillion, or 44%, since the pandemic recession began 11 months ago. Billionaires reaped their bonanza even as over 25 million ordinary Americans fell ill from COVID-19 and half a million died from it, while tens of millions struggled to find work, keep their homes and feed their families.

The combined fortune of the nation’s 664 billionaires at market close Friday, February 19,  2021, was $4.3 trillion, up 44% from their collective net worth of just under $3 trillion on March 18, 2020, the rough start of the pandemic crisis, based on Forbes data compiled in this report by Americans for Tax Fairness (ATF) and the Institute for Policy Studies (IPS). [See table of top 15 billionaires at the end.]

March 18 is used as the unofficial beginning of the crisis because by then most federal and state economic restrictions responding to the virus were in place. March 18 was also the date that Forbes picked to measure billionaire wealth for the 2020 edition of its annual billionaires report, which provided a baseline that ATF and IPS compare periodically with real-time data from the Forbes website. PolitiFact has favorably reviewed this methodology.

The billionaires’ $1.3 trillion pandemic wealth gain alone could pay for over two-thirds of President Biden’s proposed $1.9 trillion COVID rescue package, which Congressional Republicans have attacked as too costly. At $4.2 trillion, the total wealth of America’s 664 billionaires is also more than two-thirds higher than the $2.4 trillion in total wealth held by the bottom half of the population, 165 million Americans.

The $1.3 trillion wealth gain by U.S. billionaires since March 2020 could pay for a stimulus check of more than $3,900 for every one of the roughly 331 million people in the United States. A family of four would receive over $15,000. Republicans in Congress resisted sending families stimulus checks most of last year, claiming we couldn’t afford them.

“It is unseemly that billionaires have experienced such gains as we mark a half a million lives lost and millions more who have lost their health, wealth and jobs,” said Chuck Collins, director of the Program on Inequality at the Institute for Policy Studies. “Taxing those who have experienced windfall wealth gains to pay for Covid relief and recovery is a matter of equity and justice.”

Indeed, ordinary Americans have not fared as well as billionaires over the past 11 months:

Because of long-standing racial and gender disparities, low-wage workers, people of color and women have suffered disproportionately in the combined medical and economic crises. Latinos are more likely to become infected with Covid-19 and Blacks to die from the disease than are white people. Billionaires are overwhelmingly white men.

The stock market surge and lock-down economy have been a boon to tech monopolies and helped create multiple U.S. “centi-billionaires.” Jeff Bezos, Elon Musk, and Bill Gates were each worth more than $100 billion on Feb. 19 (and Mark Zuckerberg was close, at almost $96 billion). Prior to this year, Bezos had been the only U.S. centi-billionaire, reaching that peak in 2018. Bezos and other billionaires have seen particularly astonishing increases in wealth over the past 11 months: 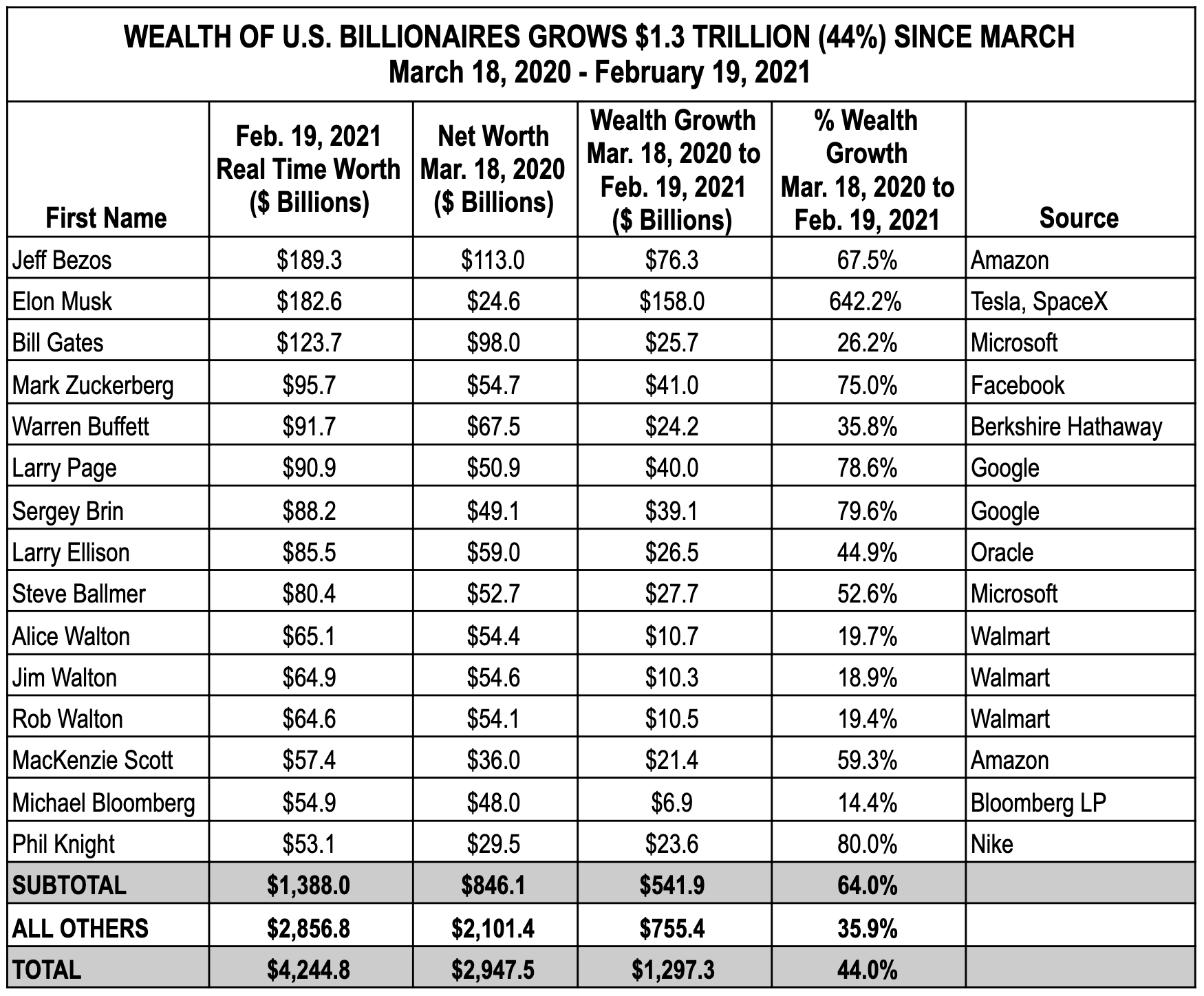