Two years into the biggest national health crisis in recent history, U.S. billionaires’ wealth continues to soar above the misery: as of March 10, their collective wealth has shot up by $1.7 trillion, or 57%, since the pandemic emergency was proclaimed in mid-March 2020. Their total wealth reached $4.6 trillion, up from $2.95 trillion on March 18, 2020, according to the latest report from Americans for Tax Fairness (ATF) based on Forbes data. The number of U.S. billionaires increased by 15%, from 614 to 704. Data can be found in the table below and here for all billionaires, including a state-by-state breakdown.

Under current law, none of that wealth gain—essentially income—will likely ever be taxed. A proposed Billionaires Income Tax (BIT), authored by Senate Finance Committee chairman Ron Wyden (D-OR), would close the giant tax loophole that allows those pandemic profits to largely go income-tax-free.

As billionaires grew richer, the past two years of COVID have been a frustrating, wearying, often tragic journey for tens of millions of Americans. Nearly 80 million have contracted the virus and almost one million have died from it. The pandemic created a deep recession, with unemployment peaking at 15% in 2020. Wages and salaries increased 2.6% in 2020 and 4.5% in 2021—far below the wealth gains of billionaires. And as families suffer from pandemic-induced inflation, billionaires struggle with shortages of yachts and private jets.

Average Americans would have fared even worse over the past 12 months if President Biden and Congressional Democrats had not enacted the American Rescue Plan (ARP) one year ago today. ARP rescued economy and tens of millions of working families.

Americans for Tax Fairness has been tracking the pandemic profits of billionaires for the last two years. Highlights of the top 15 billionaires’ wealth growth during that time include: 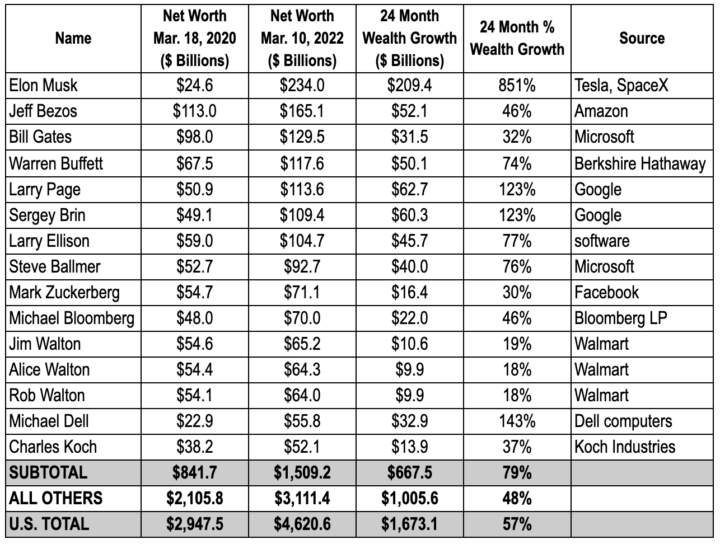 The scale of U.S. billionaire wealth and wealth growth is hard to comprehend:

“Working families pay what they owe in taxes each paycheck. Billionaires generally pay little or nothing in taxes on these extraordinary gains in wealth. Congress should enact a Billionaires Income Tax to directly tax these wealth gains as income each year, so that billionaires begin to pay their fair share of taxes. Such a reform is not yet part of President Biden’s investment and tax legislation now being revised by Congress, but it should be.”

Billionaires do not pay close to their fair share of taxes:

The rising asset values billionaires have enjoyed over the past two years are not taxable unless the assets are sold. But billionaires don’t need to sell assets to benefit from their increased value: they can live off money borrowed at cheap rates secured against their rising fortunes. And when all those wealth gains are passed along to the next generation, they entirely disappear for tax purposes.

The Billionaires Income Tax would tax billionaire wealth gains every year, just as workers’ pay is now. Tax on the increased value of easy-to-price assets—such as the publicly traded stock that makes up the bulk of billionaire wealth—would be collected annually. Tax on the rise in value of tougher to appraise assets like closely-held businesses, fine art and private jets would be collected once the item was sold and a value established, with interest charged to make up for any missed annual payments.

The BIT would raise $557 billion over a decade from about 700 taxpayers. That’s enough to pay for all the climate-crisis-response and other environmental investments in President Biden’s Build Back Better framework.