Whether measured over 13 months or 31 years, the growth of U.S. billionaire wealth is both astounding and troubling based on Forbes data as of April 12, 2021. Billionaire wealth growth has perversely accelerated over the 13 months of global pandemic. But the piling up of fortunes at the top has proceeded at a rapid clip for decades even as the net worth of working Americans lagged and public services deteriorated.

Tax reforms of the type proposed by President Biden would begin to reverse these damaging trends.

Between March 18, 2020, and April 12, 2021,the collective wealth of American billionaires leapt by $1.62 trillion, or 55%, from $2.95 trillion to $4.56 trillion. [See data table here]. That increase in billionaire wealth alone could pay for nearly 70% of the 10-year, $2.3 trillion cost of President Biden’s proposed jobs and infrastructure plan—the American Jobs Plan. 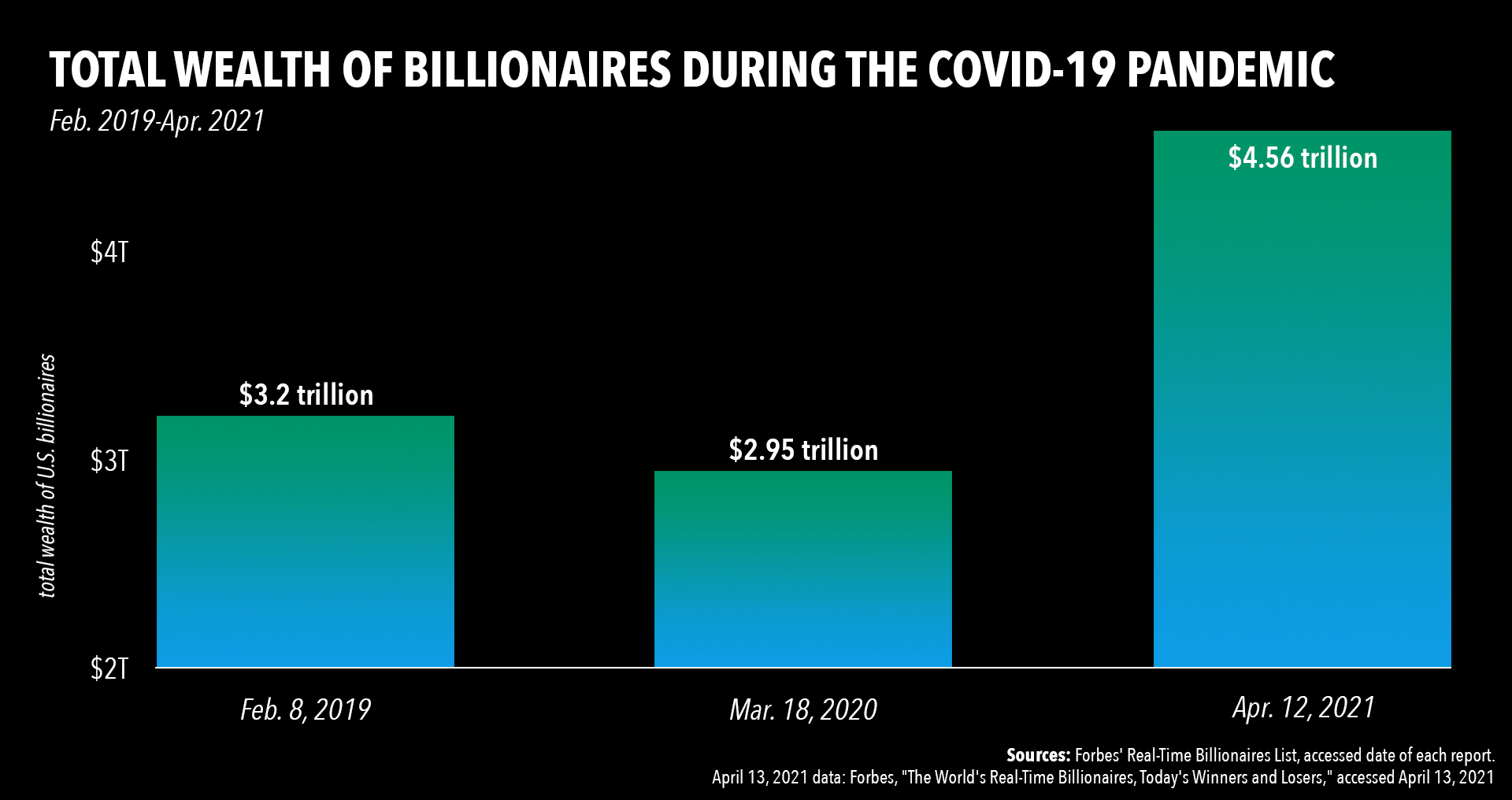 As of April 12, there were six American “centi-billionaires”—individuals each worth at least $100 billion [see table below]. That’s bigger than the size of the economy of each of 13 of the nation’s states. Here’s how the wealth of these ultra-billionaires grew during the pandemic:

Here’s how the wealth of these ultra-billionaires grew during the pandemic: 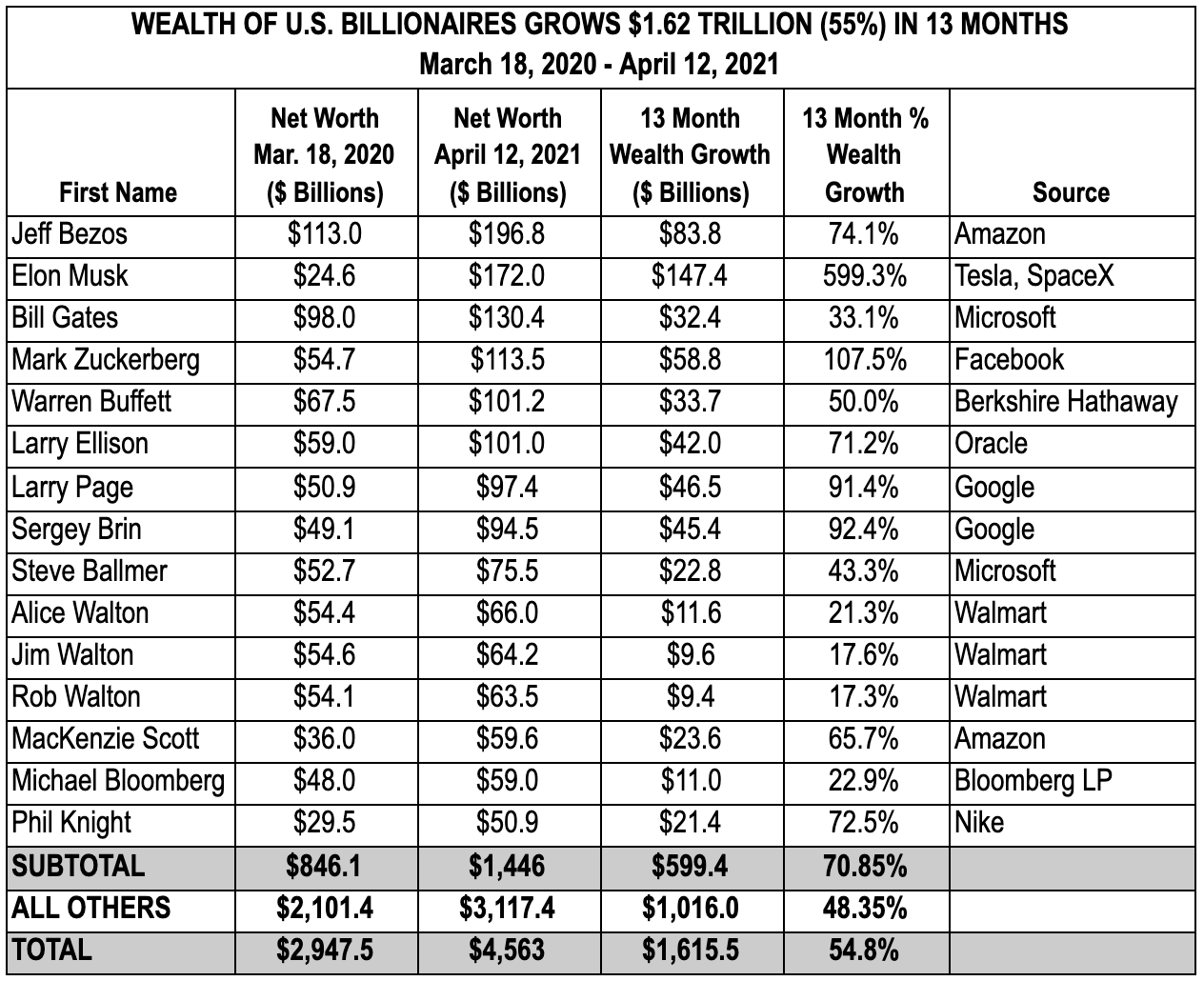 Here’s how their wealth has grown in recent years: 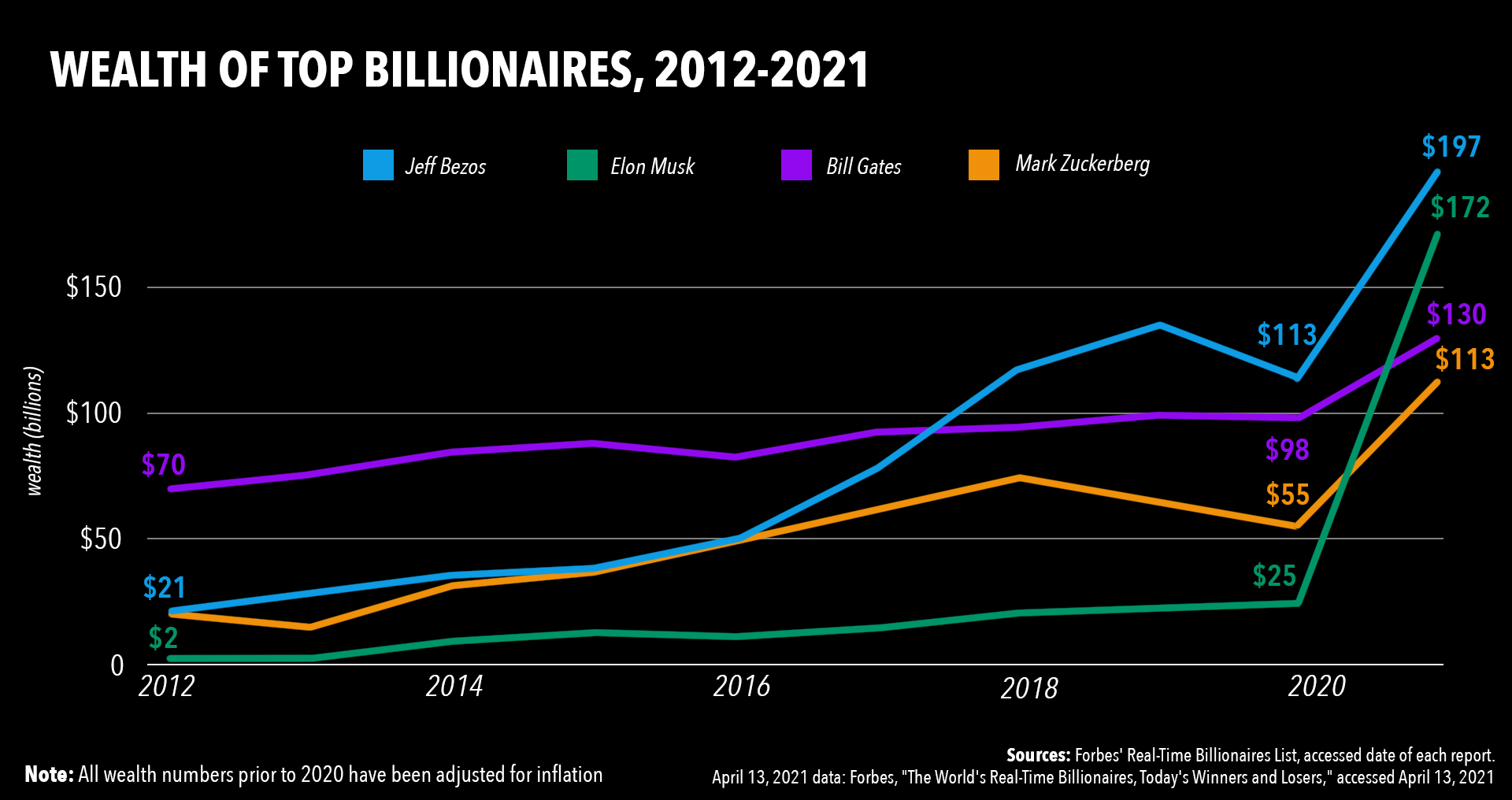 Periodically ATF and IPS report on historical trends in billionaire wealth growth since 1990 using Forbes annual billionaire wealth reports as the benchmark. This month Forbes released its 2021 report, based on wealth measured March 5. However, compared to Forbes real-time data reports since then there appear to have been anomalies in that report (e.g., there were 60 fewer billionaires on March 5 compared with April 12), so we are instead using April 12 real-time data for this comparison.

Below are the findings about billionaire wealth growth over the past 31 years [data sources].

Billionaires’ huge pandemic-era wealth growth comes on top of a 19-fold increase in billionaire wealth over 31 years—from an inflation-adjusted $240 billion in 1990 to $4.56 trillion in 2021. More than a third of the $4.3 trillion growth in billionaire wealth from 1990 to today has come amid the past 13 months of coronavirus misery. During those same 13 months, over 30 million Americans fell ill from COVID, over 560,000 died from it and about 77 million lost jobs. 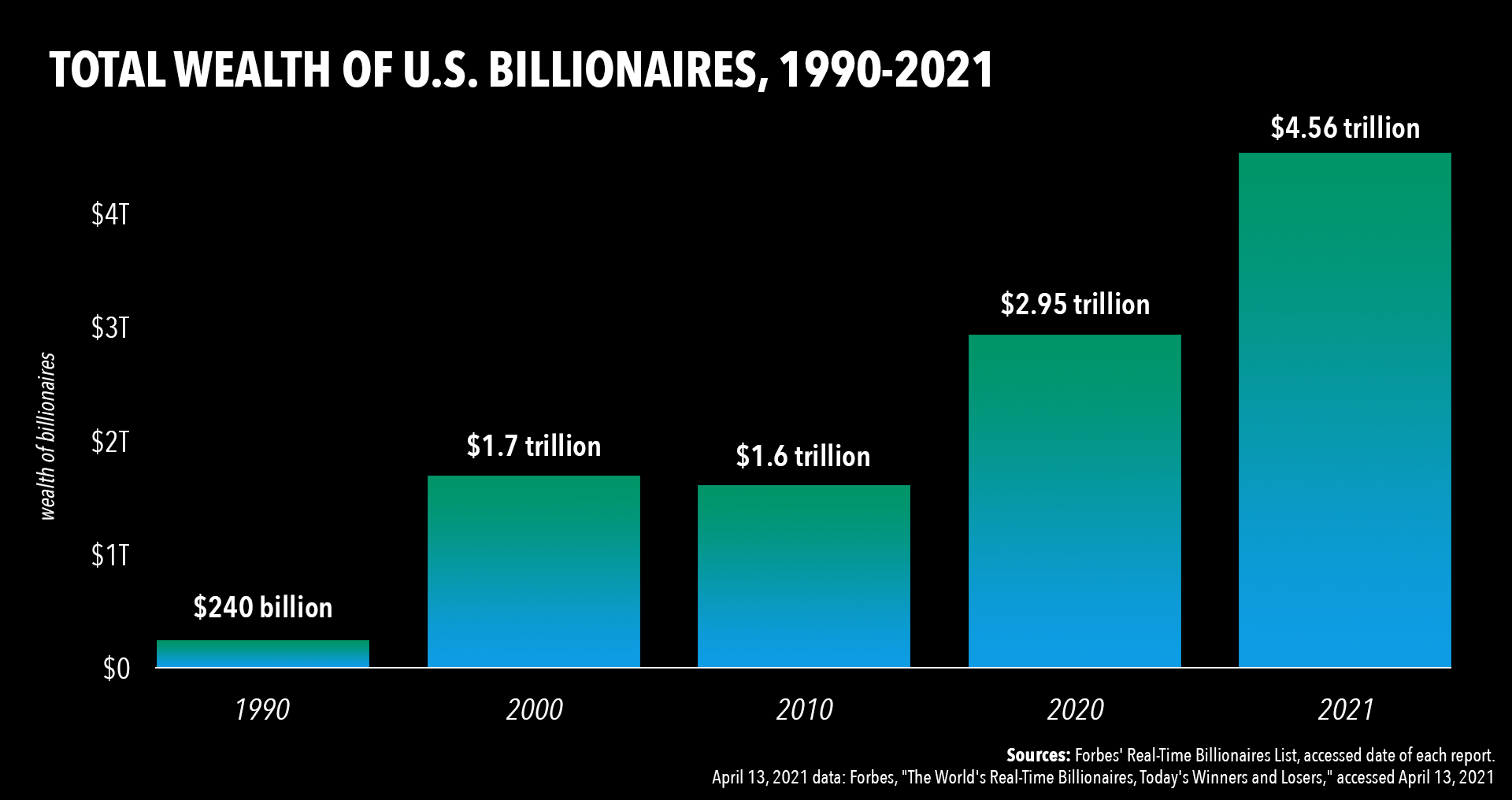 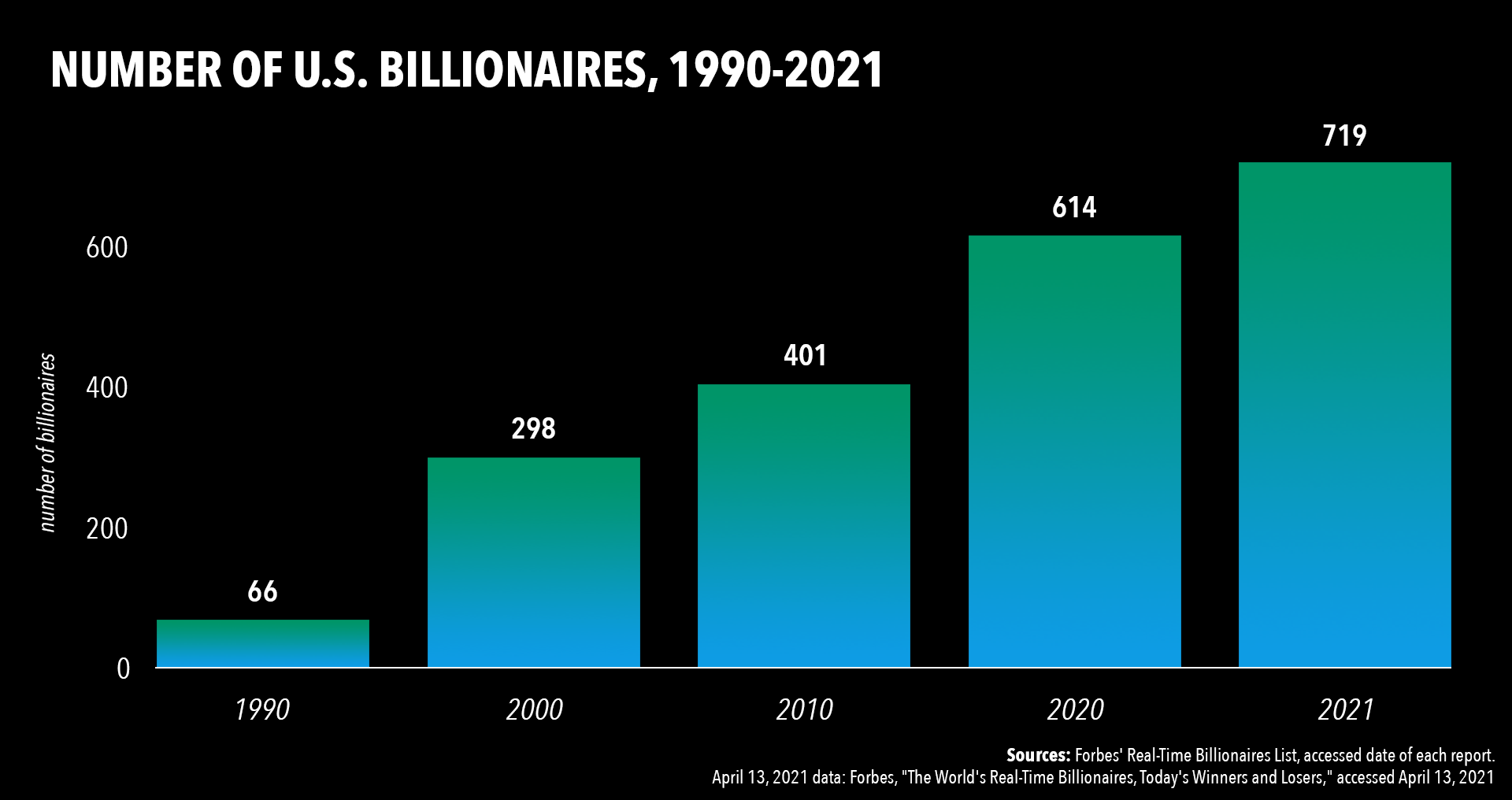 America’s 719 billionaires held over four times more wealth ($4.56 trillion) than all the roughly 165 million Americans in society’s bottom half ($1.01 trillion), according to Federal Reserve Board data. In 1990, the situation was reversed—billionaires were worth $240 billion and the bottom 50% had $380 billion in collective wealth. 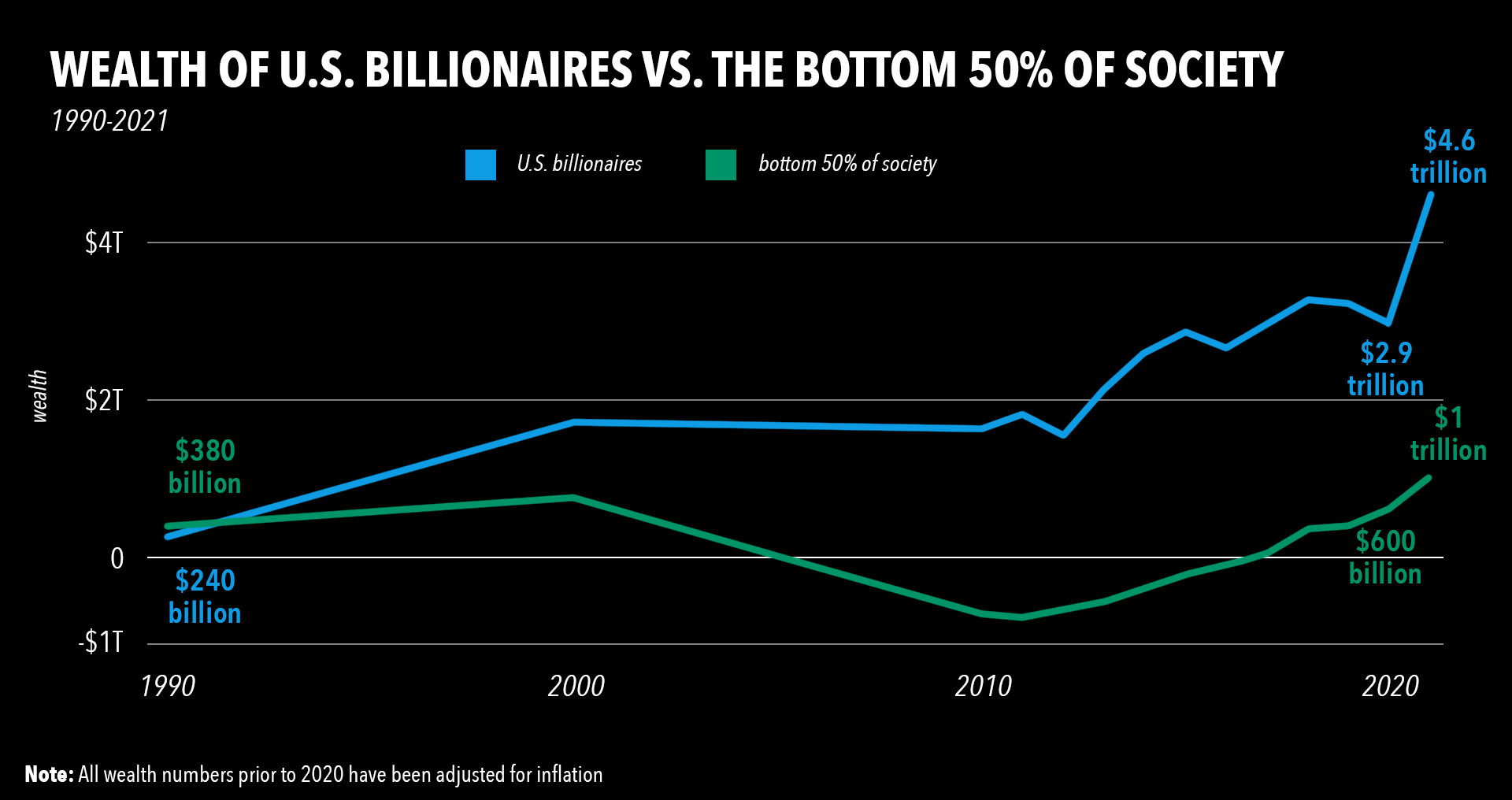 Household net worth holdings are calculated by taking the $2.49 billion that the Fed is reporting (on April 12) as the net worth of the bottom 50% of society, and backing out the Feds reported value of “consumer durables” from the reported “net worth” variable. This provides a more accurate picture of the wealth of the bottom half. This method is based on New York University economist Edward Wolff, who argues that durable consumer goods — like televisions, furniture, and household appliances — are not easily marketed. Automobiles, the main durable good included in the Survey of Consumer Finances (one of the two component data sources for the DFA data), are slightly easier to sell. But cars typically lose rather than gain value over time, making them a weak store of wealth. Wolff’s exclusion of automobiles is also consistent with the Federal Reserve’s approach to national accounts, where vehicle purchases are listed as expenditures rather than savings. For more on this methodology, see Wolff’s National Bureau of Economic Research paper Household Wealth Trends in the United States, 1962-2013 and the Institute for Policy Studies’ 2017 Billionaire Bonanza.

Even in the billionaire class, fortunes are unbalanced: Nearly 45% of the nation’s 719 billionaires come from the worlds of finance (184) or technology (138).
[See data table and charts here]. 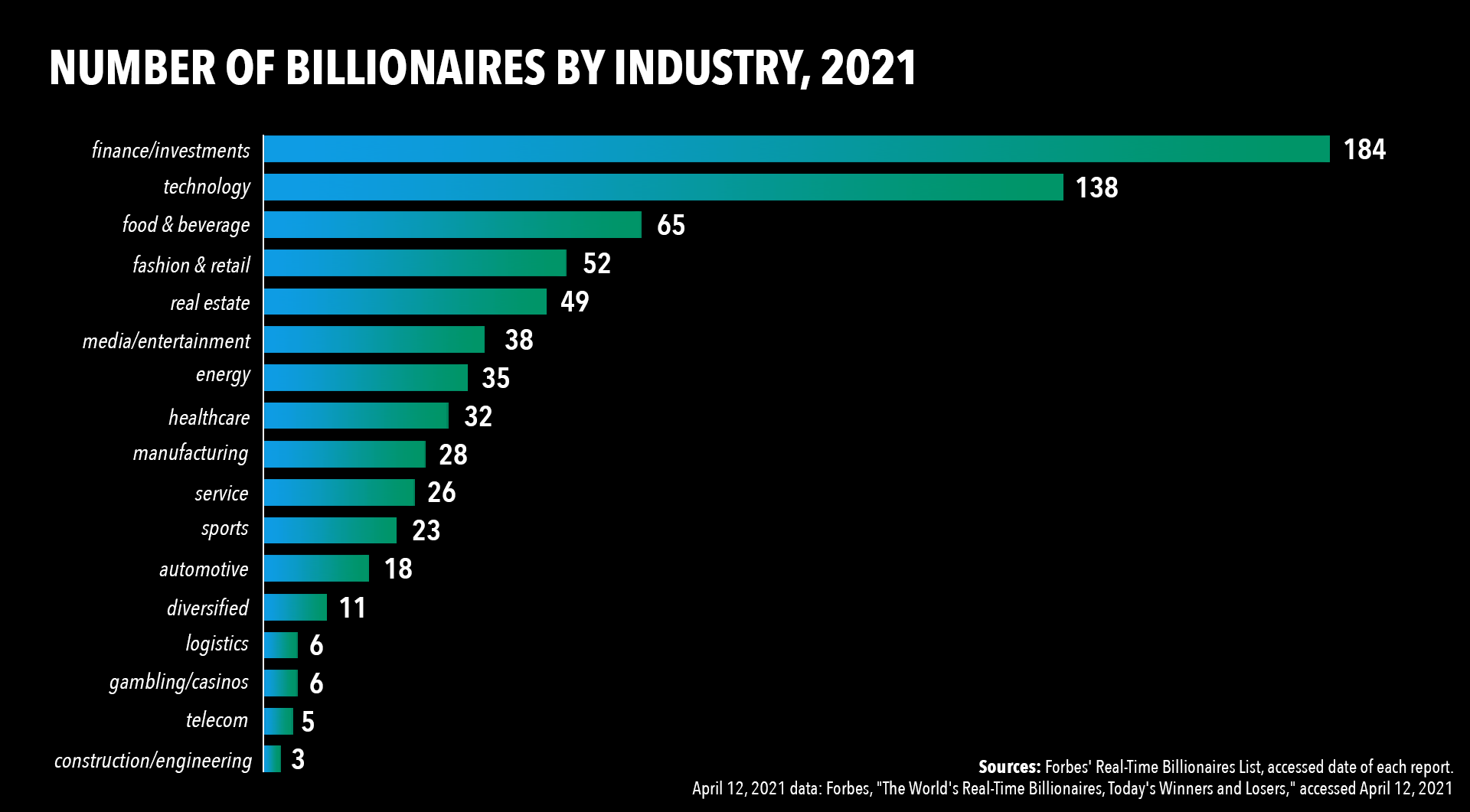 Those two industries alone hold over half (55%) of billionaire wealth: $2.5 trillion of the $4.6 trillion total. However, billionaires whose wealth flows from technology hold nearly 70% more wealth—$1.5 trillion—than the $906 billion held by financial industry titans. 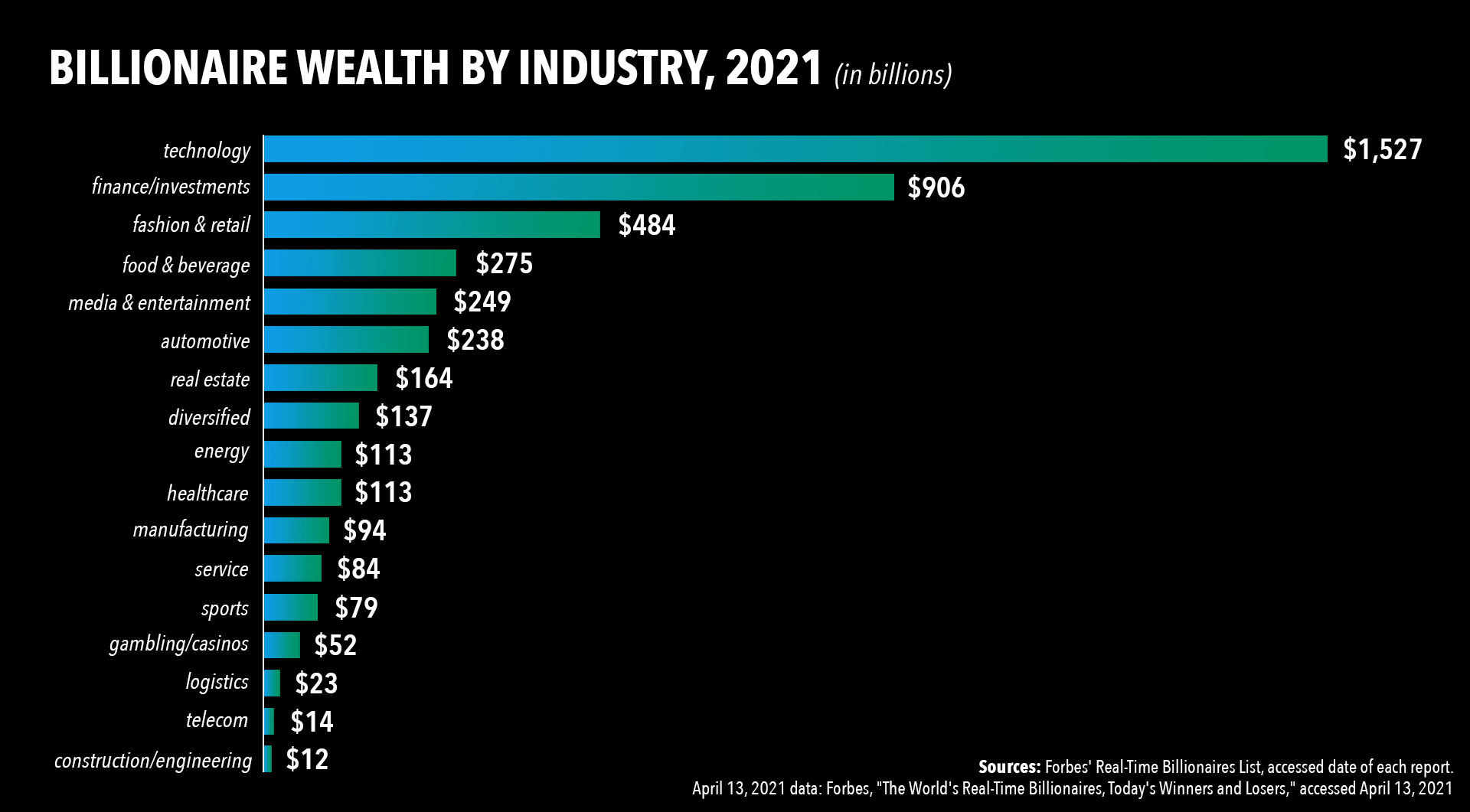 March 18 is used as the unofficial beginning of the pandemic because by then most federal and state economic restrictions responding to the virus were in place. March 18 was also the date that Forbes picked to measure billionaire wealth for the 2020 edition of its annual billionaires’ report, which provided a baseline that ATF and IPS compare periodically with real-time data from the Forbes website. PolitiFact has favorably reviewed this methodology.

During his presidential campaign, Joe Biden outlined a bold program of progressive tax reform that would tap some of those billionaire riches for important public investments in infrastructure, manufacturing, green energy, caregiving and more. He’s already unveiled his corporate tax reform proposal, the Made In America Tax Plan, which would raise the corporate tax rate from 21% to 28% and close offshore tax loopholes. It would raise up to $2.5 trillion over 15 years. Billionaire wealth consists largely of corporate stock, so billionaires would indirectly pay more if corporations are more fairly taxed.

Americans for Tax Fairness is a diverse campaign of more than 420 national, state and local endorsing organizations united in support of a fair tax system that works for all Americans. It has come together based on the belief that the country needs comprehensive, progressive tax reform that results in greater revenue to meet our growing needs.

The Institute for Policy Studies is a multi-issue research center that has conducted ground-breaking research on inequality for more than 20 years. The IPS Program on Inequality and the Common Good, and the Inequality.org website, provide research, advocacy and policy development on issues related to economic inequality.