The collective wealth of Washington State’s 13 known billionaires jumped by $151.2 billion, or 47%, between mid-March of last year and Jan. 29, 2021, according to a new report by Americans for Tax Fairness (ATF) and Balance Our Tax Code (BOTC). The $151 billion in pandemic profits of the state’s richest residents could cover the state’s projected $3 billion three-year budget gap 50 times over and still leave them as wealthy as they were when the pandemic started 10 months ago.

The state Department of Revenue estimates that Washington’s billionaires will contribute $2.5 billion a year in new tax revenue under State Representative Noel Frame’s wealth-tax proposal getting a hearing in the legislature today. Her legislation (HB 1406), which would apply a 1% wealth tax on billionaires’ intangible assets such as stocks, would have reduced the $151 billion growth in the wealth of the state’s billionaires over the last 10 months by less than 2%.

Between March 18—the rough start date of the pandemic shutdown, when most federal and state economic restrictions were put in place—and Jan. 29, the total net worth of Washington’s known billionaires rose from $321.4 billion to $473.8 billion, based on this analysis of Forbes data also shown in the table below.[1]

Thanks to the outsized presence of Amazon founder Jeff Bezos and Microsoft founder Bill Gates—plus Bezos’s former wife, MacKenzie Scott, and Gates’s former colleague Steve Ballmer—Washington has the highest average billionaire net worth ($37 billion) of any state, far above those of billionaire hubs California, New York, Florida and Texas. Bezos was the richest person in the world on Jan. 29, worth a breathtaking $189 billion.

The private gain of Washington billionaires contrasts sharply with the health and economic struggles that average Washingtonians are facing because of the pandemic. Over those same tough 10-plus months, nearly 312,000 state residents fell ill with the coronavirus, about 4,300 died from it and 2.1 million lost jobs in the accompanying recession.

While federal lawmakers debate more cash payments to people and families in the next relief package, the state’s 13 known billionaires have amassed enough new wealth during the pandemic, a  $151.2 billion leap, to send every one of the state’s 7.7 million residents a relief check of nearly $20,000 each. A family of four would get almost $80,000.

Gov. Jay Inslee’s proposed capital-gains tax would convert some of the state’s billionaire pandemic profits into needed public revenue, but only if Bezos, Gates and the rest sold some of their appreciated assets. If instead they hold onto them, as billionaires usually do, current law exempts all of those gains from being taxed at either the federal or state level.

Some state billionaires have seen a particularly astonishing increase in wealth:

To put the $151 billion growth in wealth of Washington’s billionaires during the pandemic into perspective, Biden’s new coronavirus relief plan would provide to the entire country:

“The growth in wealth of Washington’s billionaires during the pandemic is mind-boggling, like no place on earth,” said Frank Clemente, executive director of Americans for Tax Fairness. “The needs of Washington’s working families suffering from the ravages of the pandemic are also profound. A state wealth tax would not come close to evening things up, but it’s a start. Shaving a modest 1% from the wealth of each of the state’s 13 billionaires, who saw their collective wealth grow by $151 billion in the last 10 months, will benefit millions.”

“For too long, Washington’s wealthiest individuals have not been required to pay their share in taxes, yet they reap the benefits of the community investments our taxes pay for like the parks we play in, the roads we drive on, and the schools where our kids learn. Continuing to tax our neighbors living in poverty at 17% while nine of the world’s richest pay 3% or less of their income in taxes is a choice we can correct,” said Jon Burbank, Executive Director of Economic Opportunity Institute, coalition member of BOTC. “Washington State has to provide significant relief to workers, families, and small businesses. We have to invest in recovery not just from the assault of the COVID pandemic on our individual wellbeing, but business prosperity and shared economic security as well.  We can’t do this with our current tax system which depends on sales taxes, penalizes low-income and middle-class families along with small businesses, and rewards the affluent, especially the very affluent. Passing a tax on excessive wealth as well as a working families tax credit will make a significant material impact on the lives of those who need it the most and brings us one step closer to balancing our tax code.”

As Washington billionaires ride out the crisis on a rising tide of wealth, the state’s working families struggle to keep their heads above water: 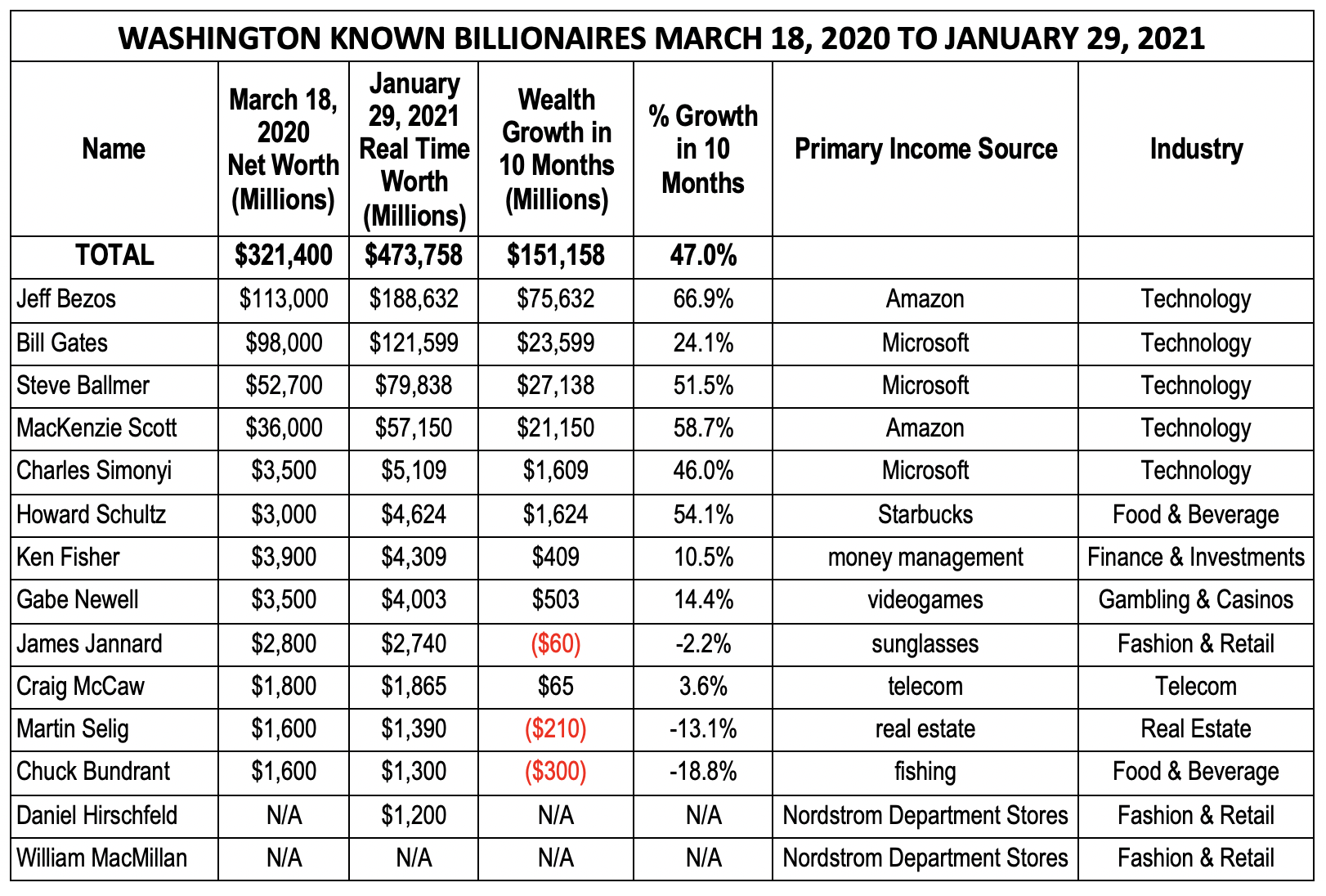 Sources: All data is from Forbes and available here.
March 18, 2020, data is from the Forbes World’s Billionaires List: The Richest in 2020.
Jan. 29, 2021 data was taken from Forbes real-time estimates of wealth that day.

[1] It was also on March 18 that Forbes’ annual billionaires report was published for 2020, providing a baseline that ATF and IPS compare periodically with real-time data from the Forbes website. Politifact has favorably reviewed this methodology.