THE PROMISE: IT WILL BE A MIDDLE-CLASS TAX CUT

“Our framework ensures that the benefits of tax reform go to the middle class, not to the highest earners.” – President Trump, Oct. 11, 2017 [USA Today] 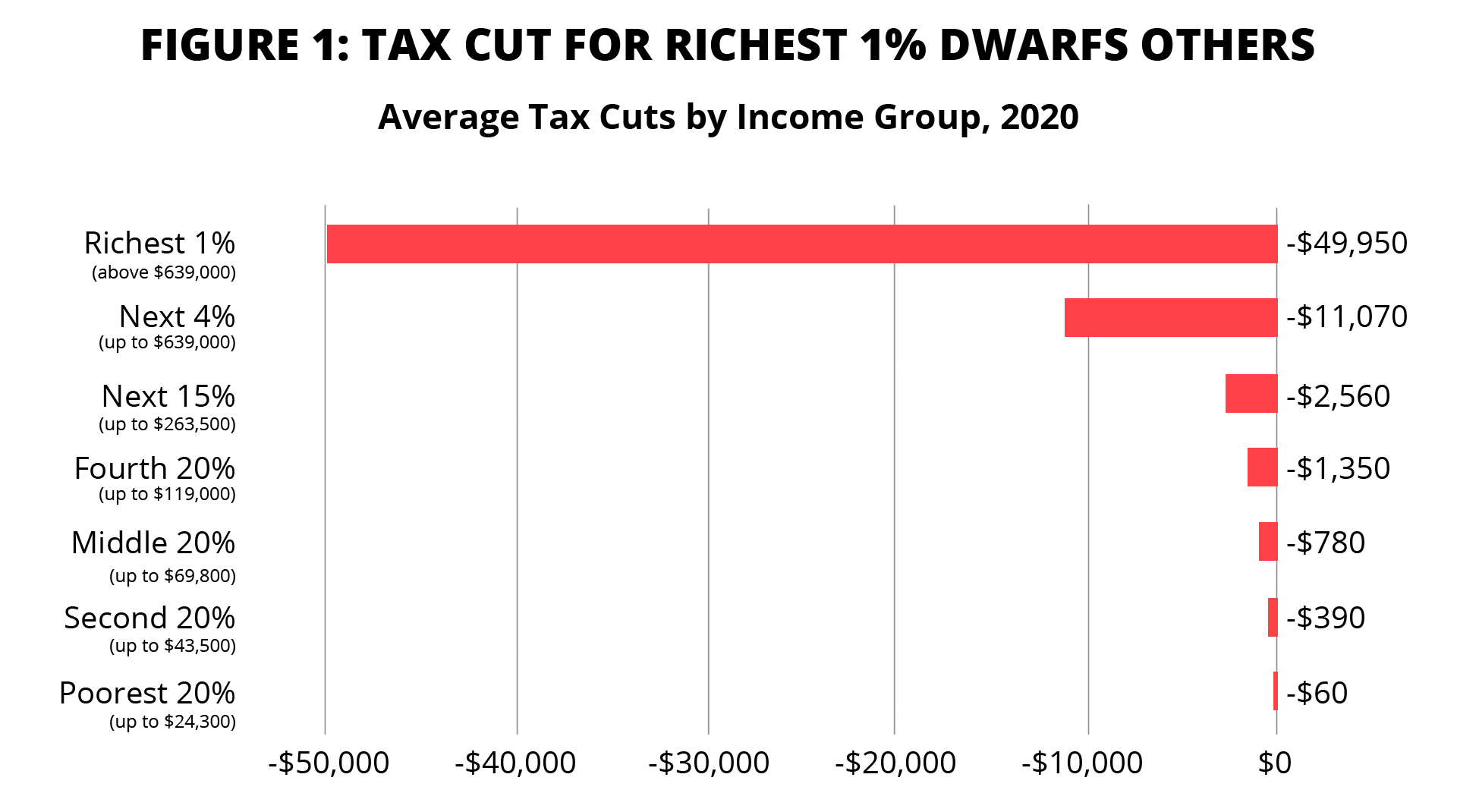 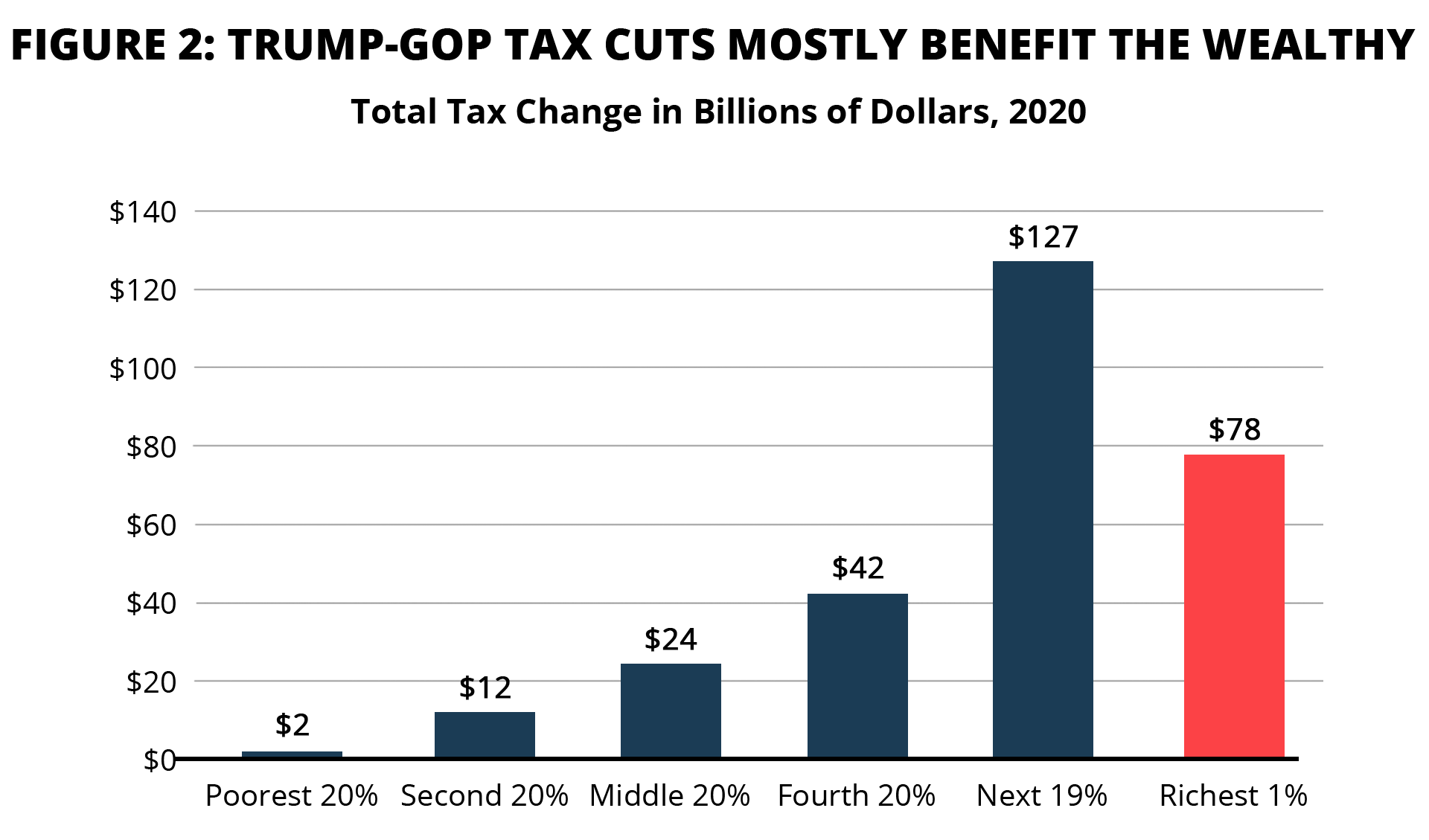 In 2020, the richest 1% will receive a total of $78 billion in tax cuts from the Trump-GOP tax law—more than a quarter of the total. That’s about the same amount as the bottom 80% of taxpayers will get. 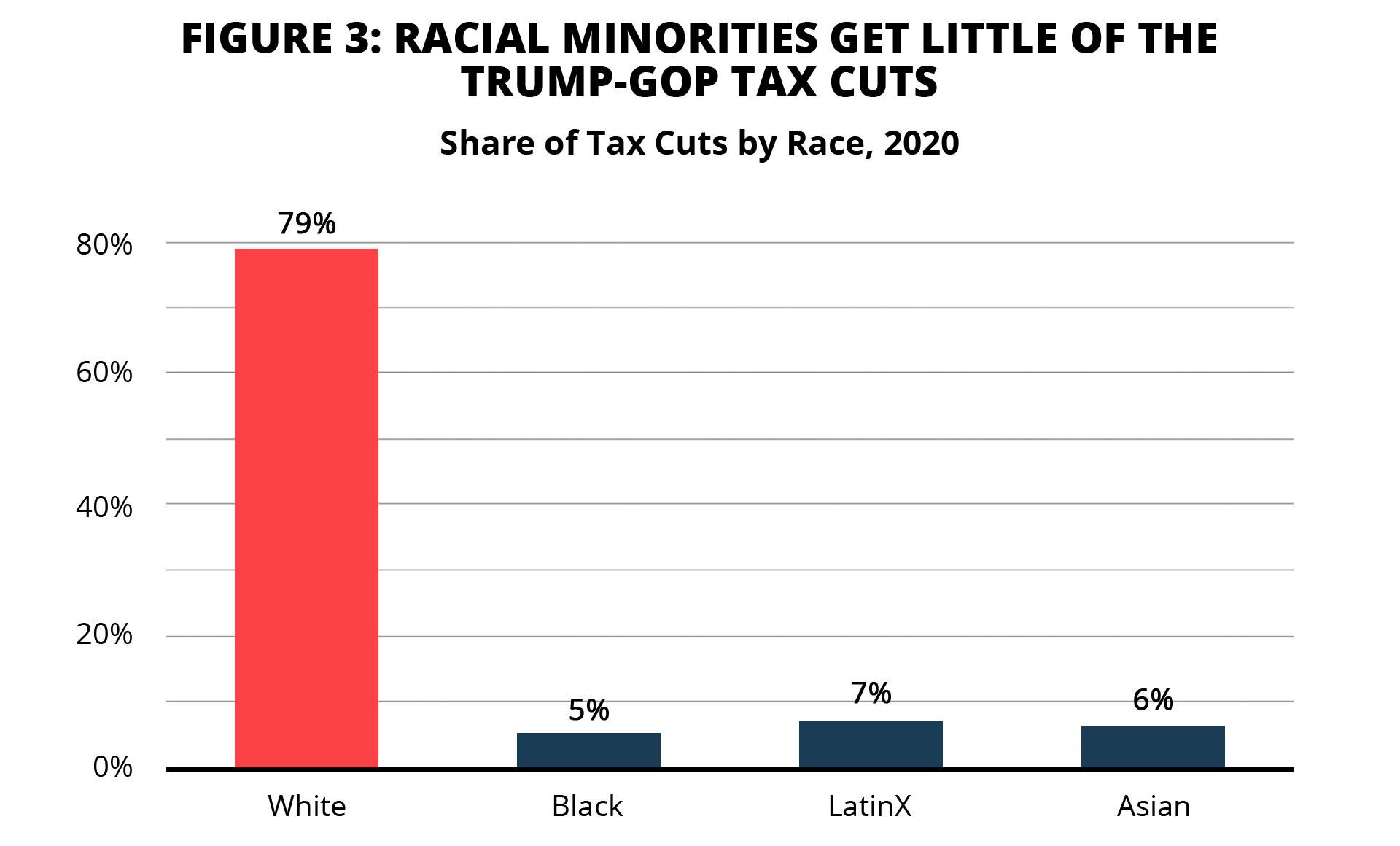 The Trump-GOP tax cuts disproportionally benefit white Americans at the expense of other racial groups. In 2020, whites will make up 67% of tax filers but will garner 79% of the tax cuts. On the other hand, African Americans will comprise 10% of all filers yet only receive 5% of the benefits. Latinx will be 12% of filers but get only 7% of the tax savings. 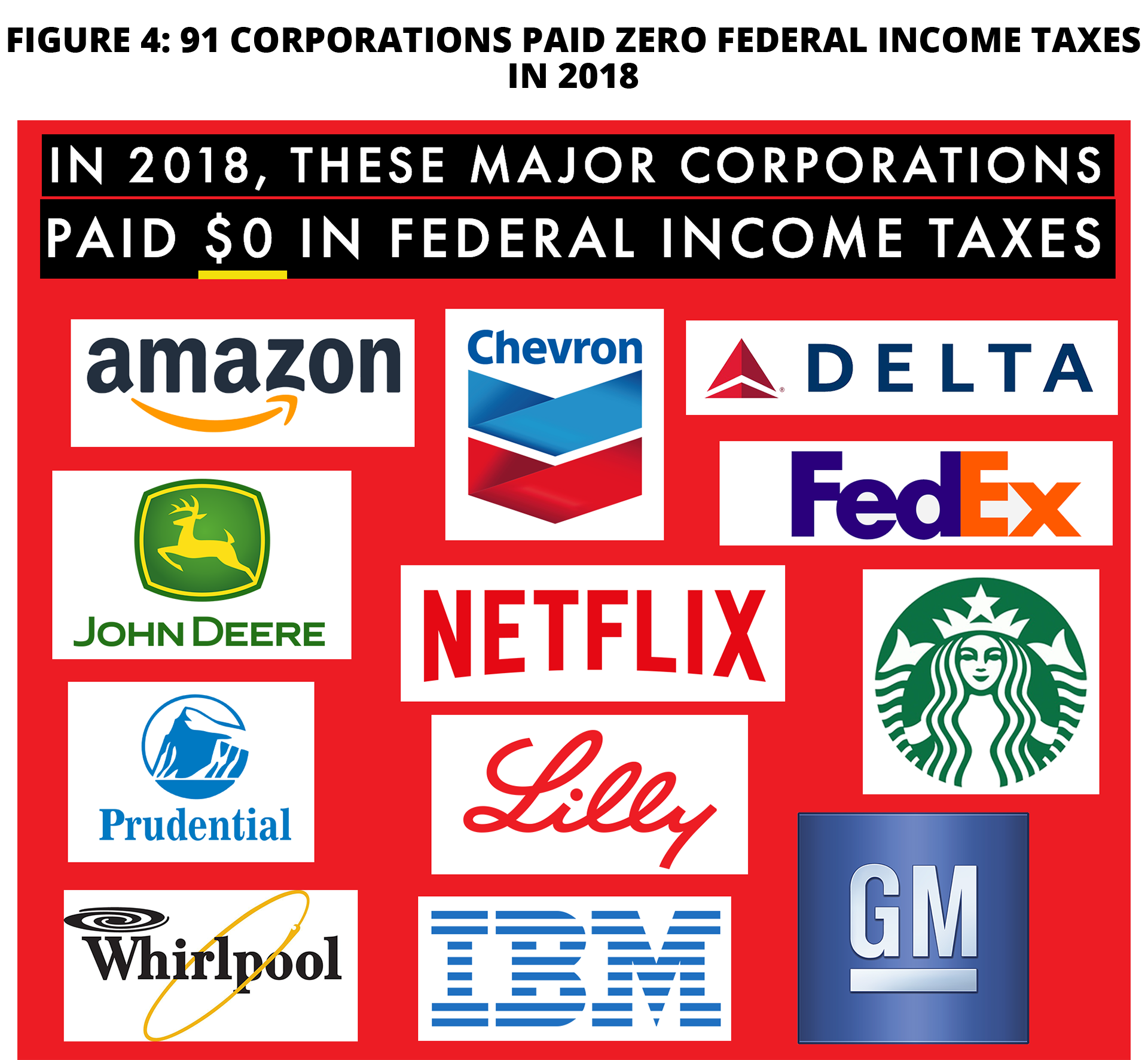 The Trump-GOP tax cuts were focused first and foremost on cutting corporate income taxes. The law slashed the U.S. corporate tax rate on domestic profits from 35% to 21% and on foreign profits to about 10%. The law expanded the ability to write off equipment purchases, and granted corporations other big favors, but it did not close corporate tax loopholes. As a result, 91 profitable Fortune 500 corporations paid no U.S. corporate income taxes in 2018. Moreover, 379 profitable corporations paid an effective federal income tax rate of just 11.3% on their 2018 income, slightly more than half the 21% corporate tax rate—which already had been slashed down from 35% in 2017. 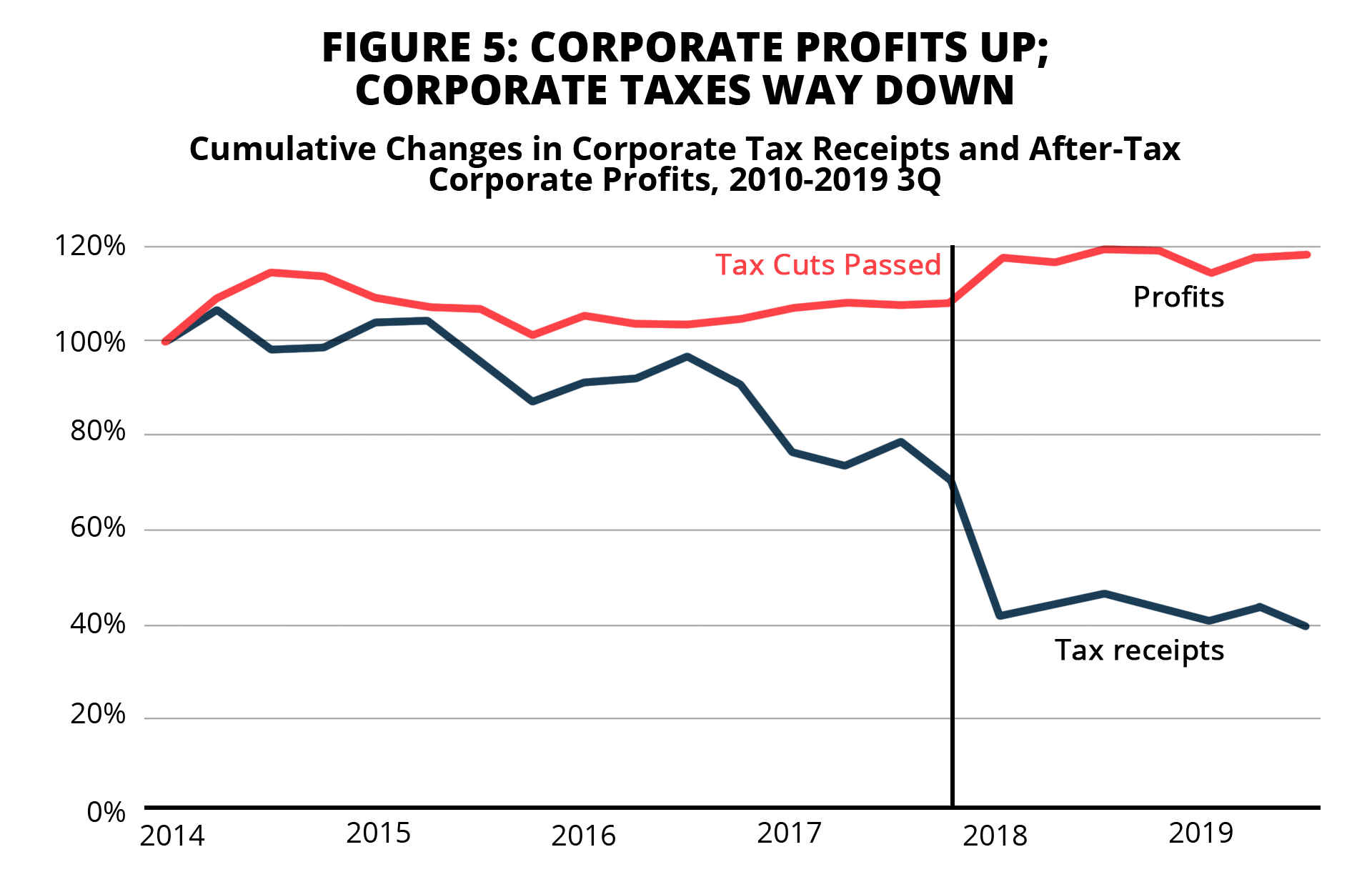 Corporate profits have increased at a healthy rate since the Trump-GOP tax cuts were enacted but corporate tax receipts have plummeted—by more than 40%. That’s because the law slashed the corporate tax rate from 35% to 21% on domestic profits and to just 10% on U.S. corporate offshore profits. 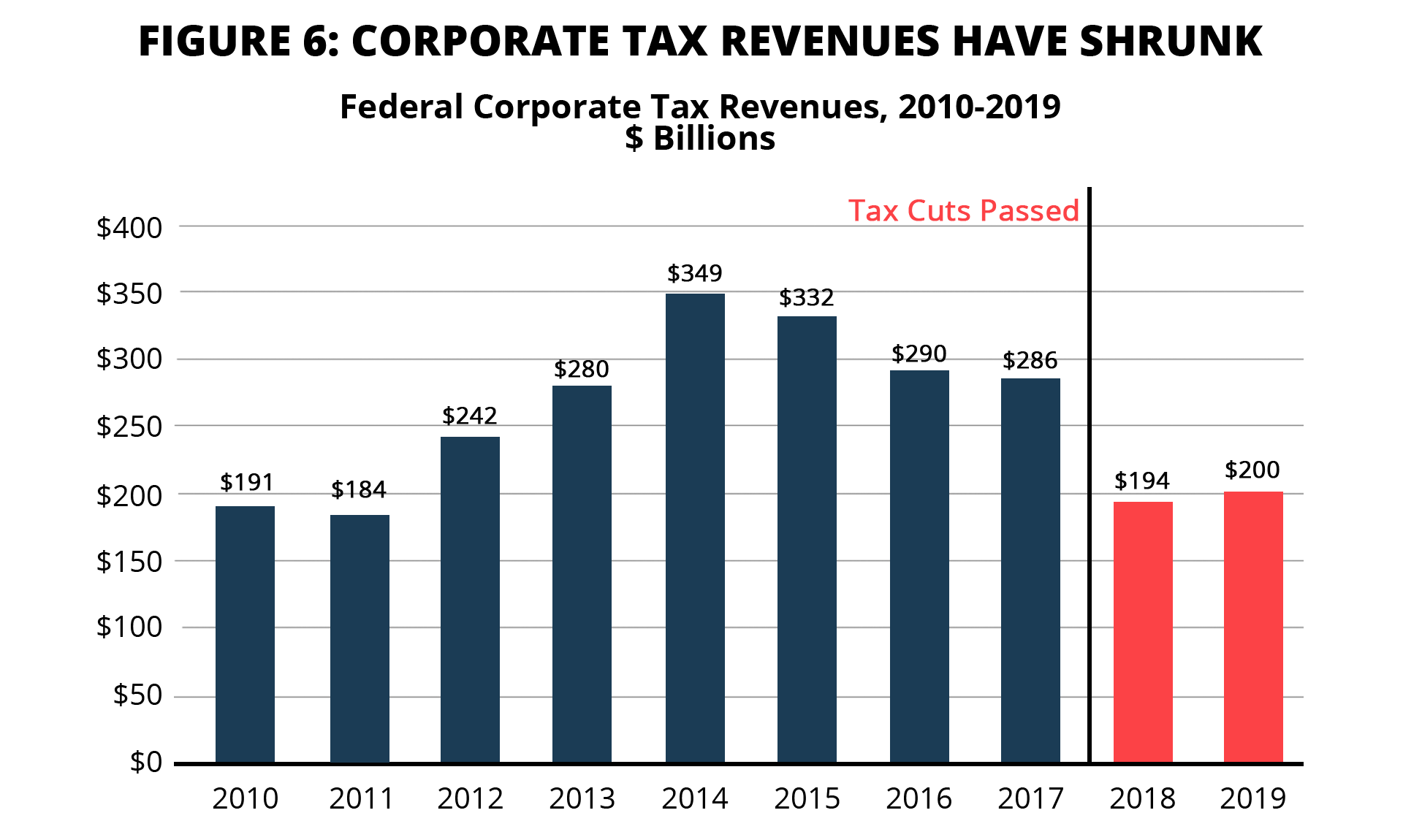 Corporate tax revenue has collapsed due to the GOP tax cuts. It fell by nearly one-third, or $92 billion between 2017 and 2018 and is on track to be at roughly the same depressed level in 2019. Those totals are about 40% lower than the $349 billion collected in 2014.