The collective wealth of America’s billionaires has jumped by $931 billion, or nearly one-third, since mid-March, roughly the beginning of the COVID-19 pandemic, even as the U.S. economy was reeling from a huge spike in joblessness and a collapse in taxes collected, according to a new report by Americans for Tax Fairness (ATF) and the Institute for Policy Studies (IPS).

The total net worth of the nation’s 644 billionaires has risen from $2.95 trillion on March 18 to $3.88 trillion on October 13 (see spreadsheet of all billionaires), or 31.6%, based on Forbes billionaires data. March 18 is the rough start date of the pandemic shutdown, when most federal and state economic restrictions were put in place. Forbes’ annual billionaires report was published March 18, 2020, and the real-time data was collected Oct. 13 from the Forbes website. This analysis was recently favorably reviewed by PolitiFact. The ATF-IPS analysis also looks at wealth growth since February 2019, well before the start of the pandemic and the previous date of Forbes’ annual billionaires report.

Despite growing needs and economic hardship caused by the pandemic, President Trump and U.S. Senate Republicans have refused to pass another financial aid package to help working families and to maintain state and local public services. Instead, they have opted to focus on expediting the confirmation of a new Supreme Court justice before the election.

Needless to say, ordinary workers did not fare as well as billionaires during the pandemic: 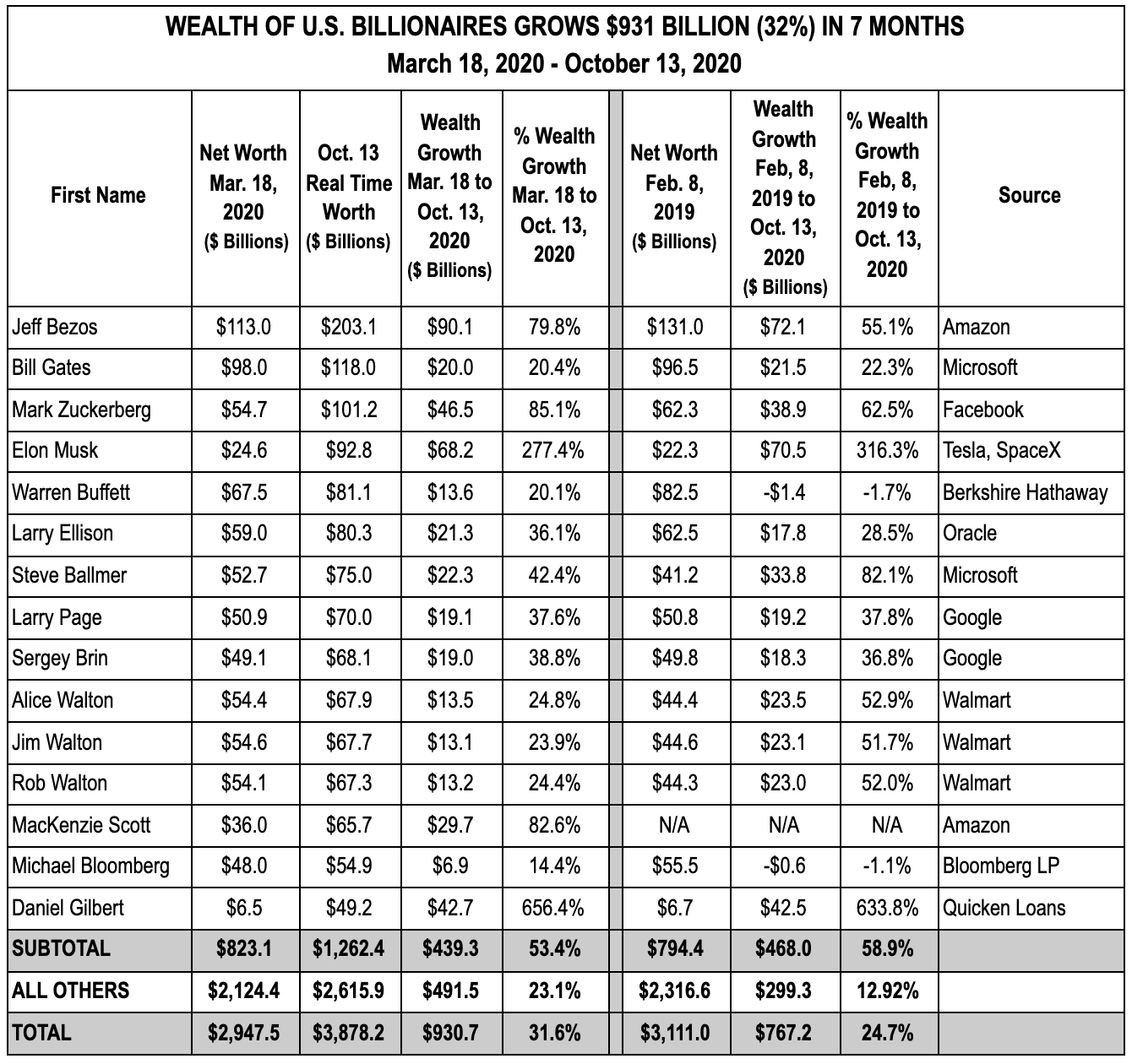 Low-wage workers, people of color and women have suffered disproportionately in the combined medical and economic crises because of long-standing racial and gender disparities. Blacks and Latinos are far more likely to become infected with Covid-19 and to die from the disease. Billionaires are overwhelmingly white men.

“Sadly, the Gilded Age is here again,” said Frank Clemente, executive director of Americans for Tax Fairness. “We have extraordinary gains in wealth by a small sliver of the population while millions suffer, this time from the ravages of the pandemic, much of which could have been avoided. In the short-term we need a robust pandemic relief package that meets the urgency of the moment, not Senator McConnell’s skinny bill that offers political cover. In the long-term we need major reform that taxes the extraordinary wealth of the billionaires and millionaires and uses that wealth to create an economy that works for all of us.”

“With Mitch McConnell’s Senate paralyzed with inaction, U.S. society is kicking into inequality overdrive, with wealth surging up to U.S. billionaires,” said Chuck Collins of the Institute for Policy Studies and co-author of Billionaire Bonanza 2020, a report looking at pandemic profiteering and billionaire wealth. “The juxtaposition between surging billionaire wealth and the imploding livelihoods of ordinary Americans is grotesque and unseemly.”

Some billionaires have seen a particularly astonishing increase in wealth:

The total wealth of all U.S. billionaires—$3.88 trillion today—is nearly double the $2.1 trillion in total wealth held by the bottom half of the population, or 165 million Americans.

The $931 billion wealth gain by billionaires since mid-March:

Without a federal fiscal relief package, workers will face even greater loss of jobs and services than has already occurred. The Economic Policy Institute predicts that 5.3 million public-sector jobs employing teachers, public safety workers and health care workers will be lost by the end of 2021 without more federal aid.

Even as the number of people without jobs and healthcare continues to rise, Senate Majority Leader McConnell continues to reject meaningful relief, opting instead to prioritize rushing the confirmation of Judge Amy Coney Barrett to fill the Supreme Court vacancy left by Justice Ruth Bader Ginsburg’s recent death.

The rushed confirmation of Barrett, a judge who is on the record opposing the Affordable Care Act (ACA), increases the likelihood that millions will lose healthcare and consumer protections for pre-existing conditions after the November elections, when the Supreme Court is scheduled to hear California v. Texas, the Trump-backed lawsuit to overturn the ACA.

Supreme Court repeal of the ACA could take health coverage away from 23 million people, according to the Center for American Progress. It could also eliminate protections for 54 million with pre-existing conditions like diabetes, heart disease, or alcohol or drug addiction, who could be denied coverage without the law, according to the Kaiser Family Foundation.

At the same time that millions would lose coverage and protections, repealing the ACA would heap more wealth onto rich households and prescription drug corporations that already comprise the most profitable industry in the nation. Wealthy households making at least $3 million a year would get a  $198,000 annual tax break, according to the Center on Budget and Policy Priorities. Households making $1 million a year would get a $42,000 tax break. Prescription drug corporations would receive an additional $2.8 billion annually in tax breaks.