America’s nearly 750 billionaires collectively got $1 trillion richer in 2021, a tax-free 25% gain, according to calculations by Americans for Tax Fairness (ATF) based on Forbes data. Their wealth rose from $4.1 trillion to $5.1 trillion over the 12 months ended on Dec. 31. That wealth rise could fund half of the Democrats’ proposed 10-year, roughly $2 trillion Build Back Better plan of social and environmental investments.

Go here for the full data set and see the top 15 billionaires table below. The number of U.S. billionaires rose from 659 to 736 during the year.

Under current law, none of that gain will ever be taxed unless the underlying assets are sold—something the very rich generally don’t need to do to lead lives of luxury. But if the Billionaires Income Tax (BIT) proposed by Sen. Ron Wyden had been law last year, billionaires would owe up to $240 billion on their 2021 wealth gains, depending on how much of that wealth gain was derived from tradable assets such as stock.

Wyden’s BIT would apply the capital gains rate (a total of 23.8% on the highest-income taxpayers) to the billionaires’ gain of slightly over $1 trillion. The tax would be due annually on easy-to-value assets like stocks, which comprise much of the growth in billionaire wealth. The tax could be paid on a deferred basis on harder-to-assess assets like business interests, with interest charged for the delayed payments at the time of the sale of the assets.

The billionaires’ wealth explosion last year stands in stark contrast to millions of working families struggling with rising prices (not to mention the loss of about 435,000 Americans to Covid-19). Build Back Better would lower costs for big household expenses like healthcare, childcare, housing and education, but has been stalled in Congress by conflict over how to fully fund it.

The Billionaires Income Tax could cover the one-year, $159 billion cost of renewing the expanded Child Tax Credit included in the Build Back Better plan passed last year by the House of Representatives, but which is threatened with removal by Sen. Joe Manchin. The improved CTC is already boosting the purchasing power of families with 65 million children and will reduce child poverty by 40% if it can be sustained.

The Washington Post reported late last year that Senator Manchin indicated to the White House that he’s open to including the Billionaires Income Tax in the Build Back Better Act.

Tesla and SpaceX founder Elon Musk was easily the biggest wealth winner of 2021, his riches growing by over three-quarters, or $118 billion, to nearly $272 billion. His single-year wealth gain alone would more than pay for Build Back Better’s $109 billion plan to offer six years of free preschool for 6 million children.

Musk has recently boasted about facing an $11 billion tax bill last year, some substantial part of which is going to the state of California. But even if it were all going to Uncle Sam, it would represent less than 10% of his $118 billion wealth gain in 2021, his major source of income. Average families pay about a 13% federal income tax rate.

“While 2021 was a year of frustrated hopes and tighter budgets for most Americans, it was another banner year for the nation’s billionaires,” said ATF Executive Director Frank Clemente. “Congress shouldn’t be looking to cut Build Back Better investments that will help working families’ afford healthcare, childcare, housing and much more. It instead should start taxing the spiraling wealth gains of America’s handful of bloated billionaires to pay for those investments.” 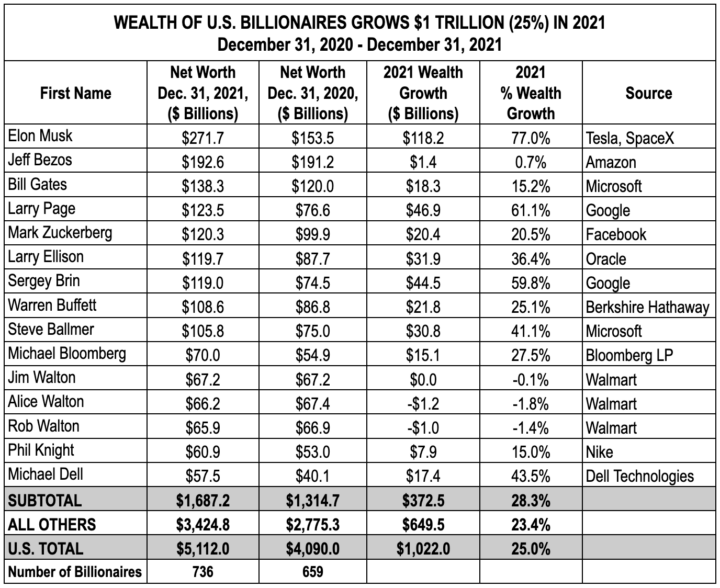