Ten-Year Revenue Total Would Be $1.4 Trillion Even as Billionaire Wealth Continued to Grow

America’s billionaires would owe a total of about $114 billion in wealth tax for 2020 if the Ultra-Millionaire Tax Act introduced today by Sen. Elizabeth Warren (D-MA), Rep. Pramila Jayapal (D-WA) and Rep. Brendan Boyle (D-PA) had been in effect last year, based on Forbes billionaire wealth data analyzed by Americans for Tax Fairness (ATF) and the Institute for Policy Studies Project on Inequality (IPS). The ten-year revenue total would be about $1.4 trillion, and yet U.S. billionaire wealth would continue to grow. (The 10-year revenue estimate is explained below.)

Billionaire wealth is top-heavy, so just the richest 15 own one-third of all the wealth and would thus be liable for about a third of the wealth tax (see table below). Under the Ultra-Millionaire Tax Act, those 15 richest billionaires would have paid a total of $40 billion in wealth tax for the 2020 tax year, but their projected collective wealth would have still increased by more than half (53%), only slightly lower than their actual 58% increase in wealth without the wealth tax, since March 18, 2020, the rough beginning of the pandemic and the start date for this analysis. Full billionaire data is here.

Some examples from the top of the list: Jeff Bezos would pay $5.7 billion in wealth taxes for 2020, lowering the size of his fortune from $191.2 billion to $185.5 billion, or 5%, but it still would have increased by two-thirds from March 18 to the end of the year. Elon Musk’s $4.6 billion 2020 wealth tax would have still left him six times richer at the end of the year than he was on March 18, with a total net worth of $149 billion. Mark Zuckerberg’s fortune would have been $97 billion after paying $3 billion in wealth taxes, 77% higher since March 18 rather than 83% higher.

The ultra-millionaire wealth tax would charge just two cents on the dollar (2%) on wealth between $50 million and $1 billion, and an extra penny (for a total of 3%) on wealth above $1 billion. Out of about 141 million U.S. taxpayers, only the 650 or so billionaires in the country would pay as much as 3% on any portion of their fortunes.

The Ultra-Millionaire Tax Act is consistent with President Biden’s goal of ensuring the wealthy and corporations pay their fair share to help fund investments in public services ranging from infrastructure to healthcare to education. The wealth tax on billionaires alone would fund about three-quarters of President Biden’s entire $1.9 trillion pandemic rescue package now before Congress, which has been attacked by Republicans as unaffordable.

The nation’s billionaires could easily pick up the tab. Their collective wealth now tops $4.2 trillion, up by 44%—or $1.3 trillion—in just the 11 months since the start of the pandemic lockdowns in March 2020, according to another analysis of Forbes data by ATF and IPS. Over that same grim stretch, 73 million Americans lost jobs, 25 million caught the coronavirus and half a million died from it. Billionaires have been on a roll for a while, too: their wealth is up 18-fold over the past 30 years—from $240 billion in 1990 to $4.2 trillion today.

March 18 is used as the unofficial beginning of the pandemic because by then most federal and state economic restrictions responding to the virus were in place. March 18 was also the date that Forbes picked to measure billionaire wealth for the 2020 edition of its annual billionaires report, which provided a baseline that ATF and IPS compare periodically with real-time data from the Forbes website. PolitiFact has favorably reviewed this methodology.

The $4.2 trillion in wealth of the country’s roughly 650 billionaires (the number fluctuates as fortunes rise and fall above the $1 billion level) is nearly double the collective $2.4 trillion in wealth held by the entire bottom half of American society, or 165 million people.

“Skyrocketing billionaire wealth in the midst of a health and economic crisis weighing down millions of Americans is one of the best reasons for enacting the Ultra-Millionaire Tax Act,” said Frank Clemente, executive director of Americans for Tax Fairness. “This legislation will narrow the nation’s destabilizing wealth gap while raising trillions of dollars from billionaires and the other super-rich. It will help us fully recover from the pandemic and fund the long-term investments needed to create an economy that works for all of us.”

“An annual wealth tax levied on billionaires and those with over $50 million in wealth will capture some of the fortunate windfall that the ultra-wealthy have reaped during the pandemic,” said Chuck Collins of the Program on Inequality at the Institute for Policy Studies, and author of The Wealth Hoarders: How Billionaires Pay Millions to Hide Trillions. “The Ultra-Millionaire Tax Act will restore lost fairness to the tax system and slow the build-up of democracy-distorting concentrations of wealth and power.”

Under our current tax system, none of that $4.2 trillion in billionaire wealth will be taxed during the owner’s lifetime unless and until the underlying assets are sold at a gain. But even then, the gain is taxed at only about half the top rate (20%) as the top tax rate on wage income (37%).

Much of that wealth may not be taxed at the death of the owner, either. Though in theory almost all billionaire wealth is subject to the estate tax, wealthy families have become adept at strategies to sidestep that levy. Moreover, several popular methods of dodging the estate tax—including a special trust known as a GRAT— allow not only the billionaire fortune itself, but the growth in that fortune during the billionaire’s lifetime, to disappear for tax purposes, saving inheritors even more. So, for example, the astronomical increase in the value of Jeff Bezos’s Amazon stock since he took the company public—the source of his wealth of about $180 billion today—might be passed onto his heirs without facing either estate or capital-gains taxes.

10-year Revenue Estimate Explanation
Our analysis of the effects of the Ultra-Millionaire Tax Act on billionaires uses the wealth-growth assumptions employed  by economists Emmanuel Saez and Gabriel Zucman, who figured the total revenue raised by the Ultra-Millionaire Tax Act for the bill’s authors. Their 10-year revenue estimate assumes taxable wealth will grow at about 4% per year, the standard used by the Congressional Budget Office and the Joint Committee on Taxation in their revenue calculations. This uniform wealth-growth assumption is conservative, however, when applied to the rich, whose fortunes have grown substantially faster than average in recent decades. Saez and Zucman estimates show that from 1980 to 2016 real wealth of the richest 0.1% grew 5.3% a year on average. This is 2.8 points above the average real GDP growth of 2.5% per year. Average real wealth of the Forbes 400 has grown even faster: 7% per year, 4.5 points above the average. Based on Forbes data, total billionaire fortunes grew faster still over the past 10 years, from an inflation-adjusted total of $1.6 trillion in 2010 to $4.1 trillion at the end of 2020—a 150% increase, or an average annual hike of 10% after compounding. So, it is likely billionaire wealth will continue to increase at a healthy clip even once subject to a wealth tax. 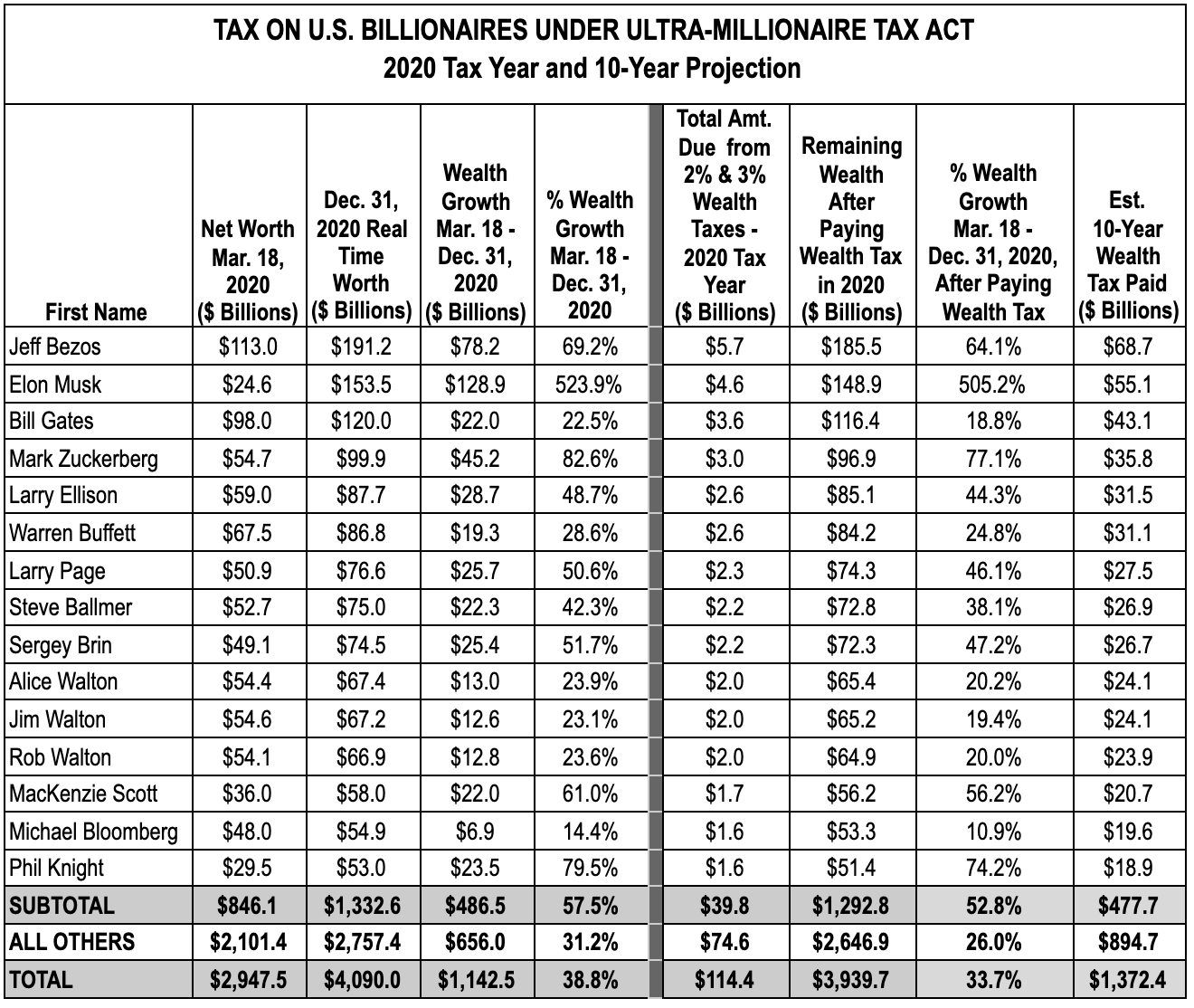